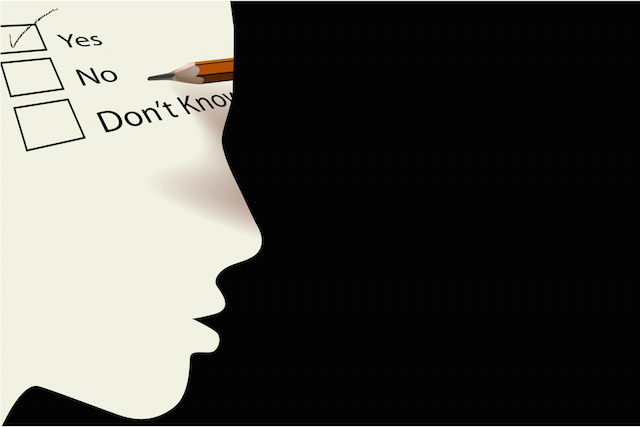 “When you say ‘yes’ to others, make sure you are not saying ‘no’ to yourself.” ~Paulo Coelho

My sister-in-law returned to Montreal after spending three months in Portugal. She told me that the biggest adjustment to being back was spending twenty minutes in the pharmacy aisle deciding which shampoo brand to get because the options were endless. She missed life in Portugal, where she only had one brand to choose from.

Ah, the paradox of choice.

I am a recovering indecisive person. I used to stand in line at restaurant counters, telling people to go ahead of me with their orders because I couldn’t make up my mind.

What if I got the poached eggs on cod cakes but the French toast with apple butter was really the way to go? At least with brunch menus you can order both and split it with a friend, but it gets a little trickier when you’re talking about plans where you can’t be in two places at once, but you still try to be.

When I was invited to four different Halloween Parties in my twenties, I attempted to go to all of them! I didn’t want to have FOMO (fear of missing out), so I spread myself thin trying to do it all by making an appearance at each party—always with one foot out the door.

The downside to saying yes to each of my friends was that I wasn’t able to be fully present for just one person. I felt scattered and rushed to get on to the next party, and I left each of my friends feeling like they weren’t important enough to commit to.

The other thing indecisive people like me used to say is, “I’ll try and make it.”

Really? You’re going to try? We both know that probably means you’re a no show. Why don’t you just say yes or no? To quote Yoda from Star Wars, “Try not. Do or do not. There is no try.”

I said yes so many times I felt like I was spinning plates. Running around like a crazy person trying to please everyone, I wondered, “How did I get stuck with so many commitments?” (Ahem…well, Myrite, you did say yes to all those commitments).

It was as if I didn’t know any other option but saying yes. That was until one day I met with a fellow coach to see if she was interested in co-creating a program with me. I ran the idea by her expecting her to say yes right away (as I would have!). But when we finished the meeting she said, “Do you mind if I sit with this and see if it’s a yes?”

What? Say that again? These were new words to my ears. I had never heard of that option! I didn’t know that you could say that! It opened up worlds of possibilities.

First of all, I respected her more for saying she’d have to think about it than if she rushed to please me with a yes. And it also taught me that I could give myself the time and space to sit with a choice to see if it was a genuine heartfelt yes or if I was saying yes out of guilt or obligation. Just so you know, saying yes out of guilt is a definite no-no.

I also used to be so afraid of what would happen if I said no. I didn’t want to disappoint anyone, but what I realized is that when you say yes to other people at the expense of yourself, the hardest person to disappoint is really you!

If you’re so concerned with what other people might think if you say no, then ask yourself whether you’re making other people’s needs more important than your own. Just like kids who throw a tantrum when they don’t get what they want, you can expect that when you start to bravely and gracefully stand your ground and say what you want instead of what others might expect of you, you’ll get some pushback. But that is part of living a brave life. .

So here are some suggestions from my recovering people pleaser heart to yours, whether you’re indecisive, have FOMO, or rush to say yes.

1. Learn how to be okay with disappointing some people.

As Oprah so eloquently taught me, “In order to live a brave life you have to be okay with disappointing some people.”

When you say no to someone else, you are saying yes to yourself. Instead of worrying about other people’s needs, take care of your own. As Brené Brown shares, one minute of discomfort while telling someone no is better than a few years of resentment after saying yes to something you didn’t want to do but feel obligated to.

When someone makes you an offer, before you say yes, try slowing it down. Take the time to check in with yourself and say “let me get back to you.” Or, “Sounds good! Let me sit with it and ill let you know by…” Or “Let me check my calendar/check in with my partner and get back to you.” Then make a choice: yes or no. Don’t sit in the in between or try and do both. On that note…

(Unless your name is Merlin, in which case I apologize). But if you can be in two places at once, that is a miracle. If you can be fully present in both places, that is a double rainbow miracle.

The thing is, when you try and be in two places at once, you are setting yourself up for feeling split, torn and neither here nor there.

What are you really saying when you say “I’ll try?” Is it a way to get yourself off the hook, so you don’t have to be responsible for committing to anything? Trying only works when there is conviction behind it. When you mean it with commitment and effort. But when you use “I’ll try” as a scapegoat for “I wasn’t planning on showing up,” that’s when you get into trouble. You’re trying to use the easy button and replace “try” for the scarier “no.”

So here’s my advice: Don’t say try when you really mean no. Start by practicing saying “no thank you.” And if it is a yes, then commit by saying “I will.”

5. Realize there is no wrong choice.

I have to keep telling myself this over and over when I’m torn between topics for which programs to launch next. Every time I am torn between choices. I am learning to just choose one. Start with that.

Whether it’s a brunch order or Saturday night plans or a job offer. Choose one and stick to it. If you really don’t like it, you can leave, quit, or try something else, but at least start by choosing somewhere to focus your energy for now.

Give yourself permission to choose and know that there is no wrong choice. What If whichever experience you will have is exactly the one you are meant to be having in that moment?

Fullness Coach and Pattern Disruptor Myrite Rotstein helps women stop filling up with food, people pleasing, and self-doubt and learn to fill themselves up from the inside out, so they can stop dimming their light and remember their ‘nuf'ness.’ She leads monthly Fullness Circles to help women elevate one another, speak their truth, and spark connection. Visit her at myriterotstein.com.