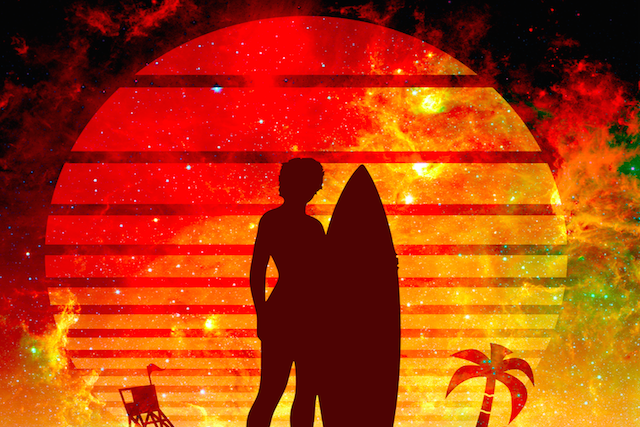 “If you want to conquer fear, don’t sit home and think about it. Go out and get busy.” ~Dale Carnegie

Not too long ago I went through an extremely chaotic and emotional two-week period. Anything that could go wrong or be difficult did and was. I thought it would never end.

When it began, the little hiccups were easy to let roll off my shoulders. After about a week, I was feeling pretty worn down and was in tears daily. At the end, I felt numb, and when things kept going wrong I would say to myself “Sure… Okay …what’s next?”

These two weeks were filled with miscommunications, the realities of parenting a teenager, negative art critiques, the end of a three-year business relationship, technical difficulties with my social media accounts, a shoulder injury, and an art block, and none of my efforts seemed to put any of the proverbial fires out.

Not to mention that we were surrounded by literal fires here in Southern Oregon, which brought oppressive smoke and stress.

I was tired, scared, tired, hurt, tired, irritable, and physically taxed. And did I say tired? Usually getting into the art studio and painting is the best way to bring me back around, but that wasn’t working either. I would stare at my painting and just not know what to do, so I would do nothing.

About a week in, I drove myself to the coast to surf for the day, thinking that getting out of the smoke and into the ocean would wash away the negativity. But the conditions were not in my favor, and the day was frustrating as I paddled my way from one side of the beach to the other searching for waves. I drove back into the smoke feeling defeated, complacency of the crapolicious period of time setting in.

The next week, I decided that there was nothing left to do but treat myself with some kindness and compassion. I rested, ate a carton of ice cream, and watched schlocky movies. I thought that maybe by just not fighting it anymore, the procession of poop would lift. But no, the hits just kept coming.

I felt the depression creeping in as it has a tendency to do after anxiety has beat me into submission.

For me, anxiety and depression have a way of cultivating more anxiety and depression. As the challenges arose in continuum, seeing the positive became harder and harder. The negativity took the lead and thus started a downward spiral of adversity and uncertainly. It is a horribly stagnant and uncomfortable place to live.

So, I decided to participate in a surfing competition. Wait… wha?

I had actually planned to compete months before. It was not something that I had ever done prior, and it is generally an activity that I would consider completely out of my comfort zone.

I’ve never been interested in competitive sports; I’m nervous when put on the spot and I am not comfortable being the center of attention. A friend who competes annually told me it would be casual fun, but it didn’t necessarily sound like a good time to me. It sounded nerve racking.

Nevertheless, I had registered to compete. The timing couldn’t have been worse. I already felt like I had been hit by an emotional mac truck, and the physical ailments were tagging along like uninvited hitchhikers.

I decided that I would go, but if I wasn’t feeling it, I would back out and just be there to enjoy the beach and support my husband and our friends. And so, we prepared for a long weekend at the coast.

The day before our departure my husband got a cold and I could feel one coming on. The morning we left I woke with a migraine.

“Oh, this is starting out fantastic,” I thought to myself, but I kept my snarky remarks to myself, climbed into the van, and off we went. Hubbie sniffing and sneezing and me unable to keep my eyes open for very long.

I have to admit that I was glad to get out of my art studio. Staring at my painting that I was stuck on had been a source of irritation that I was relieved to take a vacation from.

We arrived at the beach to find almost non-existent waves, which would make a surf competition pretty difficult. Then, I received a not such fantastic report from a friend whose father is in poor health and I realized that my parents had missed my daughter’s volleyball game because I had told them the wrong time. And my shoulder was killing me. Would it ever end?

The more it came, the more indifferent I felt. The apathy was only interrupted by sporadic bursts of tears followed by the need to collapse and sleep.

I swear the sole reason that I didn’t back out of the competition was simply because I just couldn’t walk back up the beach one more time to get to the registration table again. Plus, I started to question if I would be disappointed in myself and regret it if I surrendered.

So, I went on. My heat was at 11:40 the next morning. I would have twenty minutes to catch as many waves as I could, only two of which would count toward my score. The waves were ankle height. How on earth was this going to work? I ate some chocolate and went to bed.

The morning of the competition, I woke with small butterfly flutters in my stomach that in the hours leading up to 11:40am turned into a swarm. I was nauseous, shaky, and terrified. At least I had seemed to have beaten the sickness and my migraine was gone. Focus on the positive, right?

I paddled out in to the water with my six competitors and sat for what seemed to be an eternity. Then the horn blew and my twenty minutes began. I caught as many waves as I could and it was actually going okay.

The horn blew again ending my heat and I came out the water with the biggest smile on my face. I had done it. I was happy with how I had surfed but mostly, I was just psyched that I had gotten out there. All of the crap from the previous two weeks melted away and all of a sudden, my problems didn’t seem like such a big deal.

“Look what I just did!” I exclaimed. I felt proud and accomplished, the sky seemed bluer, and the world brighter. I felt ready to tackle anything. I found out that I came in dead last in my heat but it didn’t matter. I had gone through with it.

I brought that feeling home and immediately was able to resolve the painting I had been stuck on. The technical problems I was having got fixed, and harmony seemed to be on its way to restoration. I, once again, felt I could take on the world.

I am a highly sensitive person who struggles with anxiety. When things are going well, it feels like the good will never end. When life is not working in my favor, I feel as though I’ve been sucker punched and then repeatedly kicked when down. Like all of the warranties have just expired. Like I’m making all the wrong choices and doing all the wrong things.

It can be hard to stand back up again when I’m questioning every option. The fear is overwhelming and paralyzing. But I now realize one way to effectively shake off these negative cycles, which are inevitable: I can turn fear on itself by doing something that intimidates me.

I can fight fear with action.

During this particularly bad negative cycle, I became scared of everything and it was hard for me to move forward, as I was petrified by all of the possible outcomes. It destroyed my confidence.

My everyday coping methods of dealing with anxiety were not working. But by doing something that scared the crap out of me, something completely out of my comfort zone, I showed myself that I am strong.

Also, I am aware that surfing, skiing, hiking, and mountain biking are all activities that force me to engage with the present. I can’t think about what’s happening in other areas of my life when I’m dropping into a wave or flying down the side of a mountain. It’s like jet-fueled mindfulness. I am reminded that there are things that I cannot control, and I become aware of the smallness of my problems.

In this particular instance, I was so lost in doubt and confusion that merely going to the coast for a surf didn’t boost me. However, by surfing in a competition, something that was completely foreign to me, I was able to not only get outside myself for a minute through the physical act of surfing, but I was also able to prove to myself that I can accomplish things that I interpret as out of my reach.

Sure, I may not have ended up on the winners’ podium, but in non-existent surf and with every eye on the beach watching, I competed. And when I walked out the water, I was cheered. 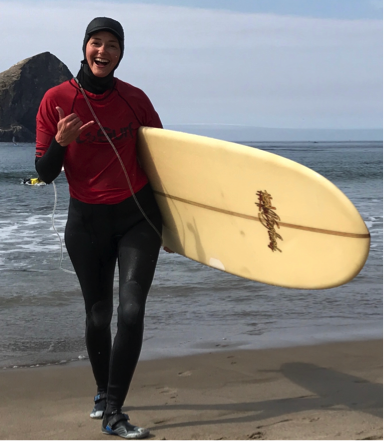 Want proof of how doing something terrifying changed my outlook? Take a look at the photo to the right. That’s me coming out of the water after my heat. That smile is genuine. I felt like a winner.

For me, there is nothing more debilitating than being fear-driven. It is a barrier to progress and I, for one, feel I have come too far to let anxiety sit at my table for long.

Don’t get me wrong. There is such a thing as healthy fear. If I would have shown up to the competition and the waves were fourteen feet high, I don’t think I would have surfed. But if I would have backed out because things had been going poorly and so, “this will probably be a disaster too,” well, I just plain refuse to adhere to that mind set, even if that’s where my brain wants to go.

We all go through periods of time when the world just seems to be working against us. Cycles when we feel we are swimming against the current. Sometimes the best way to break the cycle is to show ourselves that worry and doubt have not taken total control.

We can take the power away from fear and stock it back into our arsenal by taking action.

We set ourselves free by proving that we can do the very things that scare the bejesus out of us and that life will still go on, possibly with a renewed confidence, even greater than it was before. So, go out and do something that scares you. I double dog dare ya’!