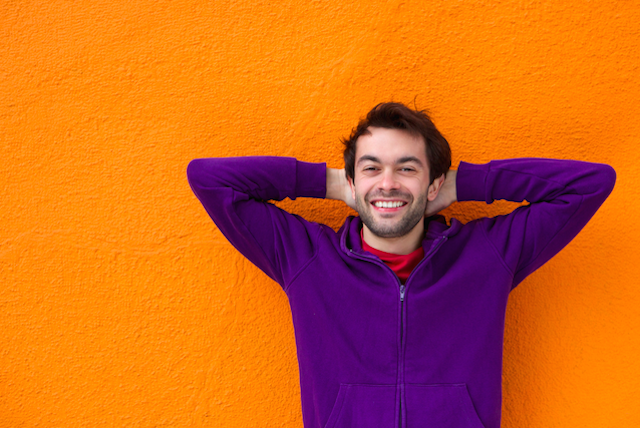 “Do not become a stranger to yourself by blending in with everyone else.” ~Dodinsky

I spent many decades of my life trying to be person I was expected to be.

It was partly the kind of expectations our parents impose on us, but also those from society, combined with the worst ones of all: the expectations I had put on myself.

For example, the story of who “I should be” had told me that:

Naturally, my actions reflected all of these thoughts.

Eventually, the picture my life painted became everyone else’s picture.

I ended up going into a “safe, secure career”—you know, the dreaded corporate job you don’t want but you “know you should do” to have all the trappings of a secure life.

People discouraged me from pursuing the things I was interested in, because it wasn’t guaranteed that I would make a good living in them. How was I supposed to support a family if I didn’t have a safe, secure job?

Happiness wasn’t less important in this equation; it was non-existent.

As the first born, I felt I didn’t have a choice—partly because I had expectations from others riding on my shoulders, partly because I wanted to make my family and friends proud of me.

I wanted to show them that all of my parents’ work didn’t go to waste.

For a while I could fake who I was. And for a while it worked. I went to my job like a busy worker bee and did what I was supposed to do; then I clocked out, went home, rinsed, and repeated.

About a year or two later, those first stirrings started showing up. Why am I even here? How did I get here? Do I even like this line of work? What on earth am I doing? What’s the point of my life and waking up to do all of this stuff?

Then I felt the worst feeling of all—the one we’ve all felt before—the feeling of your soul leaving your body.

The next year was unlike the first. Mysterious illnesses start cropping up: sleep issues, fatigue, aches and pains, and the worst, an unshakeable unhappiness that wouldn’t go away, even though I was doing everything “right.”

That’s when I reached a breaking point.

One day, which naturally was a rainy Monday, I stood for a moment longer than usual before entering the office door.

A second later a big commuter bus passed by.

Right then and there, I wondered if it might be easier to just get hit by a bus rather than keep repeating this ridiculous nightmare every day.

The idea that I would rather die than live another day like that shocked me sufficiently that I stepped back, and after work spent time in a cafe and thought about how I got here, and how I could get out.

There were three things after this event that dramatically helped me:

I thought about what I wanted, which was surprisingly difficult, and just went for that without questioning it. This is something that almost no one tells us to do when we’re young.

I realized how important it is to be brave, because the entire world (and often our close friends and family) is trying to change us.

2. Listening to my gut

Most importantly, I remembered to listen what my gut voice told me, beyond the intellectual stuff of what sounds practical.

3. Tuning out other people’s opinions

Finally, I stopped letting other people determine who I think I should be and decided to just be me. This was perhaps the hardest of all because we’re always receiving the message that we should be more or less of something.

I made a conscious effort each day to pause and think about what I wanted. Forget what my parents wanted, what my friends wanted, what I thought I should want—what did I want?

It wasn’t until I made these three changes that I released the brakes in my own life, regained that feeling of being myself, and finally embraced who I actually was, not who I should be.

I invested more in my passions and interests: health, medicine, meditation, reading (and writing), and lots more.

And over the next period of months and years, I gradually felt “my spirit” coming back.

We’re always going to feel pressure to make choices we think we should make rather than the choices we want to make. The world is always trying to pull us or push us in different directions.

It’s up to us to stay focused and centered so we can identify what we really want; otherwise, we’ll end up feeling that we’re just going through the motions.

Ultimately, it takes courage to be truly authentic. It can be easy to conform because it doesn’t require going against the grain or stirring up conflict, but it’s the little acts of courage that lead us to fulfillment.