How to Make Your Cruel Inner Voice Work for You, Not Against You
By Mona Lang 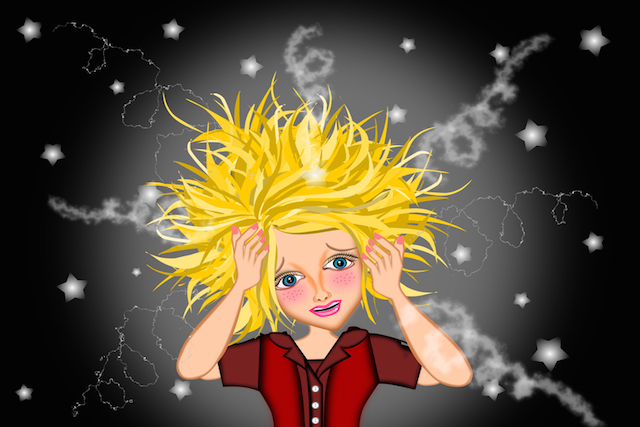 I’ve always had issues with food, but in the past five years this struggle became a full-blown eating disorder.

I remember the first time I thought I was too big, in fourth grade. Now I know that I wasn’t too big. Maybe I hadn’t outgrown my baby fat yet, but I wasn’t overweight. Still, all the other girls at my school were smaller than me.

There was one day when a pediatrician came to our school for a health check. Everyone was measured, weighed, etc. I can still feel the sheer horror I felt when my friends asked about my weight.

I lied, but they didn’t believe me. Instead, they called me fat and ugly and told me that they didn’t want to play with me any longer.

This feeling, this shame, stuck with me all my life.

Since that day I’ve struggled with low self-esteem and the fear of not being accepted for who I am. I believe this was beginning for my eating disorder.

In therapy I learned that my self-talk influences me tremendously, and I also learned that the inner voices aren’t always right. Sometimes they are ego-driven, and not focused on what’s the best for me in the long run.

My inner voice told me that I’d only be worthy and likable if I were skinny.

It would cheer me up when I was eating less than the day before, and it would beat me up when I ate “too much.” (Note: one apple plus one tub of cottage cheese was “too much”!)

I was literally starving myself. I was so brainwashed by that constant mantra of “Come on, Mona. You’re stronger than your hunger! You made it yesterday! You don’t have to eat!” that I didn’t realize I was highly depressed and severely underweight.

When I finally got tired of feeling constantly miserable, it took two therapists, countless tears, and an incredible amount of hard work to overcome my destructive behavior.

But I can proudly say, I did it. I made peace with my eating disorder voice.

Now I want to share with you the technique that kick-started my recovery and gave me back my life.

Schulz von Thun uses working groups or teams as metaphor for the inner voices we all embody (the inner plurality) and a team leader, who ideally decides and executes (that’s you).

Unfortunately, our inner voices usually don’t act like a team, but more like a gathering of selfish narcissists pretending to be important, often by screaming louder than everyone else.

The composition of our inner team depends on our given circumstances, upbringing, and environment.

In my team, for example, there is “the rational.” Its comments are well thought out and very reasonable. It wants results, numbers, and theories—“no emotional bs.” I also have “the perfectionist,” who always insists on excellence and nothing less.

In the past five years my loudest voice was my eating disorder voice. It’s been bullying all the other team members to silence them, frantically screaming the calories I had just eaten or pretending to be “the only one who really cares.”

Here’s how I got my inner team from a one-woman-show (starring my eating disorder voice) to a team of equal partners, trying to achieve a win-win-situation.

How To Manage Your Inner Team

Who are they? What do they say? Can you give them a name? I suggest you make a sketch to visualize the team constellation.

When I was in therapy, I paid attention throughout the course of one normal day to listen to and identify the voices that popped up.

The first thing in the morning I “heard” a voice telling me that I’d screwed up the day before. It told me that I’d destroyed everything I’d worked for by eating so much and that I had to skip breakfast to make up for it.

This was my eating disorder voice.

Then a quiet little voice spoke up: “Don’t be to hard on yourself, honey. You restricted yourself for so long, you deserve that cake. And not just one little slice. You deserve the whole cake.” This is, what I call, “the Mother,” as my mum (and grandma) always emphasized the importance indulging in food.

This team member deeply cares about me and wants to protect me from starving myself, but as “the Eating Disorder” is so overly powerful, it needs to become more drastic itself.

As I told you, I also embody “the Perfectionist.” During my eating disorder phase, all my team members were affected by the message the eating disorder voice kept yelling.

It’s like you’re being brainwashed. And so were my other team members.

I always had an interest in clean eating and when I tried to integrate this concept in my life, “the Perfectionist” was my biggest enemy. If I ate clean for a whole day, but then had a slice of birthday cake, it would beat me up for not eating 100 percent clean:

“You’re a failure. You just totally screwed up. Why would you even eat healthy, when eventually you’re always going to ruin everything?”

Then “the Mother” would jump on that wagon, encouraging me to indulge into the cake, while the eating disorder would furiously try to stop me from doing so.

With these and my three other team members, it got messy in my head. The next step gives order to the chaos.

Now every team member gets the chance to explain him or herself in greater detail. Make sure to listen carefully to every one and write down the main arguments.

Some of mine included:

Eating disorder: “I just want you to be skinny so that you’re confident and no one can hurt you. So please stop eating so much.”

Perfectionist: “If you stop making mistakes, people will like you. When you’re perfect, they’ll have nothing to criticize.”

Mother: “You are stressed, I can feel it. Have some cake to calm down; you deserve it. You have to take care of yourself.”

Only if you truly accept each team member will you understand its message. Think of a team at work. You have to accept people and face them with openness so that they are willing to share their thoughts with you. Only then can you really try to understand what they want need.

In the previous step you acknowledged each of your team members and gave them permission to exist. Now dig into what each one of them really needs.

Let’s go back to my example and have a closer look on what my team really wants and needs:

Eating Disorder: I want to protect you and I want you to love yourself so that you can be confident around other people.

Perfectionist: I want to protect you from the pain of not being liked.

Mother: I want to help you comfort and take care of yourself.

Slightly different from what their message was before, isn’t it?

Now it’s time to get creative: How can you satisfy the needs in a healthy way? A piece of cake won’t give you any comfort or make you feel less stressed. All it does is provide energy for your body, when what you really need might be a break.

Now that you’re aware of the different motivations, concerns, and needs, it’s easier for you to make an informed and self-determined decision.

I easily get stressed and would turn to food for comfort. Now that I’m aware of this pattern it’s easier for me to resist the urge to swallow down a jar of peanut butter and do some light yoga instead.

When my eating disorder voice starts saying that I have to lose weight to be liked, I start talking to it. I say that I heard and appreciate its concerns and that I’m working on becoming more confident, but that I’ve decided to try a different approach this time.

This is my version of the Inner Team framework, and even if seems a little strange at first to “communicate with your inner voices,” it’s so beneficial.

This process gives you the chance to take a step back and slow down instead of rushing through life one autopilot decision after another.

By allowing all your inner voices to co-exist, you reduce their tendency to catch your attention through “screaming.” Acknowledge their right to exist and know that they do want the best for you, though their suggestions aren’t always right.

I can genuinely say that I finally arrived at a point where I am in charge. Thanks to my inner team, I have the power to choose.

And I choose a healthy life.

Mona runs a blog called Project Emme, where she helps young women to find purpose and design a life they genuinely love. Learn how to deal with your inner critics and get your workbook here. It’s free!

Create a Team to Battle Fears and Loneliness