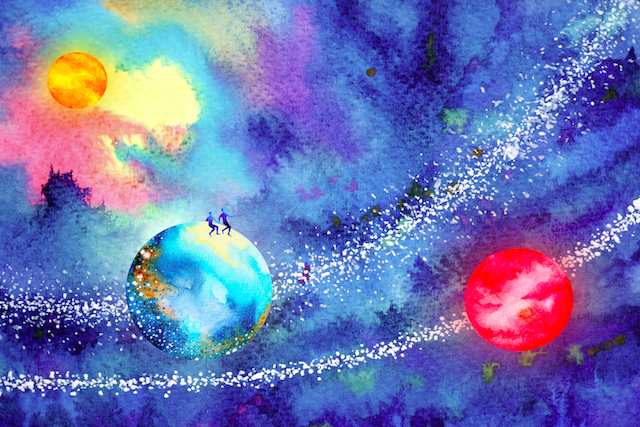 “Be the change you wish to see in the world.” ~Mahatma Gandhi

As a teen, I was passionately idealistic about justice, love, and compassion. Reading the words of Martin Luther King, Jr., Mahatma Gandhi, Mother Teresa, and other icons of justice inspired a desire to make a big change in the world.

Older people would attempt to temper my enthusiasm with a dose of jaded reality, saying things like, “That’s just the way the world is,” and “You can’t change people.”

I vowed to never be like that. I didn’t want to give into the status quo and turn a blind eye to others being mistreated.

I literally went out into the world and off to college clutching King’s book, Strength to Love, under my arm. I wanted to live my life advocating for justice and fighting for human rights.

The world swiftly punched me in the gut…

Fueled by my passion to change the world, I wrote a fierce letter to the editor on a racial topic affecting my college campus. In response, a group of giggling girls called me late at night, to mock-thank me for being the “white savior” of the campus.

It was a painful lesson that hurt deeply and confused and embarrassed me. My gusto to change the world had missed the mark.

I learned many important lessons from that “smack down” experience. I learned to listen more and understand my place within groups. I learned to forgive myself for my mistakes and continue to grow. I learned to slow down and be more deliberate in my actions.

After healing from my initial wound, I reached out to a mentor. This man had worked in the area of social justice for decades. I wanted to be like him and understand life from his knowing-heart.

He tolerated my persistent idealism of great change and my occasional self-centeredness, and encouraged me to grow and learn.

He encouraged me to accept myself for who I was and to focus on listening to others’ stories.

With hopes of making great change, I started working with those struggling with mental health issues, addiction, poverty, and homelessness. I heard the stories of people who had no voice.

Stories of disparity, discrimination, and injustice fueled my frustration with society’s sleepy acceptance of the horrors of racism, sexism, and classism. The complexity of these issues belied my passion for change.

Decades passed and I grew into the person I always wanted to be. I gained experience and understanding. But, the lack of progress in changing society and changing/helping individuals carried a high-level of burn out.

My soul felt tarnished by anger and exhaustion. I carried so many stories close to my heart…

The young girls who climbed in the bathtub at night to stay safe from stray bullets of warring gang members. The fifteen-year-old, with the wicked sense of humor, who was killed by his friends. The young man, struggling with schizophrenia, drifting homeless, and then sentenced to a lengthy prison term. The frail, elderly man living in poverty in a remote area with no one to check on him.

I felt as if my efforts had been completely futile. What type of change had I ever accomplished? I did a quick appraisal and felt full-blown compassion fatigue.

During this time, I met a man who was addicted to drugs, struggled with severe mental illness, and cycled through homelessness and incarceration. He struck me as one of the most vulnerable individuals I had ever met.

Because of his childlike trusting, it was easy for his peers to steal his money or con him out of any item. Because of his small size, he was set up and raped. He was incomprehensibly underrepresented and misunderstood within society and within the criminal justice system.

Whenever I would see him, I would reach out with a gentle voice and word of encouragement. He didn’t seem to respond or notice my efforts. He became symbolic of my compassion fatigue. I couldn’t affect any significant change for this man.

I took a break and went on a vacation. During my time off, I journaled my list of jaded grievances—aspects of the world I wanted to change.

People in the world should be more educated, more compassionate, more honest, less judgmental, more accepting, more generous, less self-absorbed… As I scribbled and grumbled, I felt myself thinking, “That’s just the way the world is. You can’t change people.”

Over my vacation, I continued to reflect on my purpose in the world. An idea that I had been tossing around began to take shape in my mind:

What if I didn’t have to change the world or even change a single person? What if I simply had to be what I wanted in the world?

By accepting the fact that I could not change the world, I allowed open space for hope and potential. I felt a burden lift, as I realized satisfying, attainable goals.

I made a list of personal, complementary goals for each grievance:

I will educate others by sharing the stories of injustice.

I will be compassionate, kind, genuine, and open.

I will be generous and trustworthy.

I will listen without judgment and strive to understand another’s viewpoint.

I will keep my ego in check and act from humility.

At the bottom of my list, I wrote, “All I have control over is myself. It is enough to focus on changing myself into the person that I want to see in the world. Any outcomes are up to the universe.”

I thought of my vulnerable friend, so taken advantage of by others. My efforts to change his world had failed. My efforts to effect healthy behaviors had failed. Yet, I had been the person to him that I needed to see in the world. I had accomplished this important goal.

Instead of being the symbol of my futility to effect change, my relationship with him became a symbol of the simplicity of “being” with another, of showing compassion to another.

After my retreat, I went back to work with a more centered approach of just being present. It felt really good.

As I walked up to the homeless shelter, I visited with a group of men outside. I saw my vulnerable friend approaching and was surprised he was looking directly at me.

I was astonished. Within that hug was my balm. He had given me a great gift of healing, stemming from the realization that we’d both helped each other in that moment. The gift was minute, but mighty. It wasn’t about changing or improving anything, but rather accepting and supporting each other. Allowing that moment to be enough.

We can focus on change, for ourselves and others, as an ideal or a goal. Working on ideals of change has a place in life. However, the balm, for me, was to elevate “just being” to the same level of importance as “changing or fixing,” and shifting my role from savior to friend.

This shift is affirming for everyone, including myself and especially those who consistently are looked upon as needing to be changed. That space of being and of acceptance is where healing can take place.

Amy has degrees in psychology, gerontology, and nursing. She loves to hike, bike and canoe. Her passion is empowering others by presenting on the topics of aging, grief and nature. She writes a quarterly post on authentic living. You can sign up for the newsletter here and learn more at agingwithamy.com.