Mindful Indulging: Having What You Want Without Guilt
By Sharada Hall 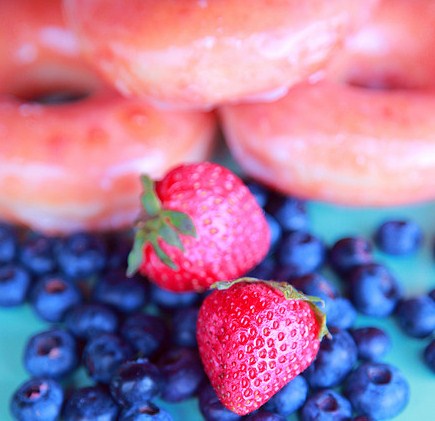 “You only lose what you cling to.” ~Buddha

I used to cling to my identity as a person who didn’t eat donuts. To me, donuts represent all that is tempting and yet forbidden. Any self-respecting natural health doctor is not supposed to like donuts, right?

This image I held of myself almost cost me one of the important realizations of my life.

Twenty years ago I was in the midst of my training to become an Ayurvedic health practitioner.  I held tightly and proudly to my dietary restrictions like a fundamentalist’s religion.

This ancient medical system of India dictated that since I was out of balance with too much phlegm, I was to avoid all wheat, dairy, fried foods and sugar. So donuts were definitely a no-no.

On my path to learn Ayurveda, I also began studying the Sanskrit language in which the original medical books were written. I found myself at a Yoga ashram in San Francisco, to attend a Sanskrit class, or so I thought.

What I promptly came face to face with was a 65-year old Indian saint in neon orange robes and dark, wrap-around glasses asking me “Who are you?”

As is traditional in an ashram, after our meditation and Sanskrit lesson, we all gathered around “Guruji” as he blessed the food that had been brought to be passed around and shared. A plate of glazed donut pieces came my way. I politely refused.

Looking back, I can’t even believe I did that. Not to mention I absolutely love glazed donuts.

I felt so sure of myself. I was on an Ayurvedic diet after all, and this particular teacher was also an Ayurvedic physician, so surely he would understand. He patiently listened to my explanation, and then told me to go ahead and eat the donuts.

“Eat the donuts!” he countered.

As I realized that everyone was looking at me like I was crazy for arguing with Guruji over the donuts, I gave in. I ate one piece. Then he handed me three more. I ate them.

Inside I was thinking, “Mmmmm. How delicious! I really wanted these donuts.” He kept piling more donuts on my plate until I really couldn’t eat anymore.

Since that moment long ago, I think I’ve grown up a bit in my attitude about desire and ego.  I like to think that I more freely admit my desires and let go of clinging to any image of myself that’s out of sync with those desires.

How liberating to be able to be honest about ourselves without judgment—to have a self-image that’s realistic, not idealistic.

I talk about food a lot with my patients, and we often get to the point where we uncover some unhealthy habits. Rather than either of us expressing judgment about it, we try to acknowledge those desires and explore them. See where there’s room to negotiate.

There are always foods or habits that someone will feel guilty about. Oftentimes it’s sugar or alcohol. On the one hand, if I forbid the sugar, that patient might never come back and we will have lost some potential healing.

On the other hand, what’s wrong with a little indulgence in moderation? Because of that life-changing moment with the donuts, I’m more prone to suggest that a desire be indulged mindfully.

There can be so much stress around denying a desire.

I truly believe that the stress of not doing something is more harmful than just doing it with mindfulness and then letting it go. How much joy can be found in savoring a small piece of chocolate unencumbered by guilt!

Nothing takes the auto-pilot out of an action like mindfulness.

With mindfulness, sometimes the desires can be seen as acts of rebellion. So many times we crave things that are self-destructive just to be rebellious. Like a teenager. Then we feel guilty afterward.

I don’t want to feel guilty or be in denial, I just want to make conscious choices.

When I allow myself to admit the desire for what it is I find that the desire has less of a hold on me. I’m able to enjoy it and let it go, instead of clinging to denial, guilt, and a false self-image.

After one of my most naive and self-righteous moments, I finally surrendered and happily lost the image of myself I was stubbornly clinging to. Now I try to do that without so much prodding.

Here are a few steps that may help you let go of your need to deny yourself and indulge mindfully, in moderation, without guilt:

1. Acknowledge a desire as it arises. Just see it without judgment.

2. Mindfully evaluate whether this is something truly harmful or rebellious or no big deal. If it’s heroin, it’s harmful.  If it’s chocolate, no big deal.  Ten bars of chocolate, harmful.

3. Check in with your self-image. Are you clinging to an idealistic image or is this honest?  If it’s not genuine, it’s got to go.

4. Explore how the desire and the genuine self-image go together or don’t. Can you indulge this desire and still feel good about yourself?

5. Go for it and let it go, or leave it behind altogether. Either do it and love it without clinging, or don’t do it at all.

Dr. Sharada Hall practices Ayurveda and Chinese medicine in Santa Fe, New Mexico.  When not chasing her 2 young boys, she’s either working with patients or writing for her natural health site http://bodhimed.com.

How to Sustain Happiness