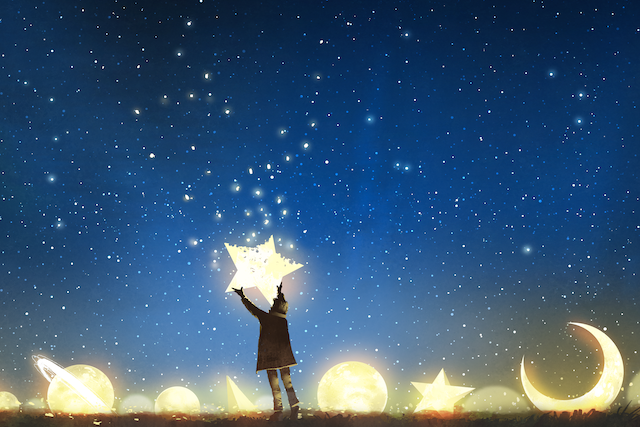 “Too many of us are not living our dreams because we are living our fears.” ~Les Brown

Fear used to be the driving force in my life.

I didn’t even know that I was living in fear at the time. I hid behind labels like “stress” and “anxiety,” but those are just clinical terms for fear.

Truthfully, my dreams terrified me because they seemed way too big to achieve. At the time, I wanted to excel in my new career, get into the best shape of my life, and create meaningful relationships—and I felt like I had a long way to go.

So naturally, I got really stressed out.

And why, oh why, did it feel okay?

It seems like stress is such commonplace now that we think we’re slackers if we don’t feel tense all the time. But that’s just our fear finding excuses to stick around.

Once I finally realized that stress was just an option, I started looking for a way through it. And I found the answers in a simple Japanese philosophy called Kaizen, which is the practice of continuous improvement through small, consistent steps.

I learned that whenever we’re scared about making change it’s because the steps we’re taking are too big, and these leaps of faith will trigger a life-saving biological response: fear.

But luckily, there’s a way to turn that fear off, and it all starts with your brain, specifically your amygdala.

Shut Down Your Amygdala by Asking Tiny Questions

Your amygdala plays a heavy role in your fight-or-flight response, a physiological reaction to something threatening (like those big dreams of yours).

When you come across a scary thought or situation, your brain will enter flight mode and your amygdala will literally stop your brain from producing new thoughts. Most artists know this as creative block, but it’s really just fear.

So your big dreams aren’t the problem—your amygdala is. And you can turn your amygdala off by asking tiny questions.

When I decided that I wanted to excel in my career, I didn’t start out with a question like “How can I help my company revolutionize the world?” No. That question would terrify even the most capable person.

Instead, I took a step back and asked tiny questions. I thought about things like “What one benefit do I hope to deliver to our audience?” Or, “What can I do for ten minutes today that will bring me closer to completing this project?”

In fact, they’re quite doable.

Once you start asking tiny questions, then you can start taking tiny actions.

The key is to pick things that are small enough to keep your amygdala from getting in the way.

And that’s why New Year’s Resolutions never work. For example, on January 1st we decide that we want to lose twenty pounds and completely give up chocolate; so we restrict our calories and give up our vice all at the same time.

When you put yourself up against a mountain, the big steps you’re forced to take will trigger your flight response and ultimately lead to stress and burnout.

If you want to achieve a big goal, you have to break it up into tiny steps.

I used this tiny-step tactic when I started focusing on becoming healthier. I didn’t do anything radical—although that’s how it started out, and I had to fail over and over until I realized radical wouldn’t work.

Instead, I took the slow and steady route, and it was brutally slow. It took me about two years to really gain momentum, but it trained me to reject instant gratification and just go slow.

Then I started going to the gym two days a week and I kept it up until I gained the momentum I needed to go four days a week.

I didn’t realize what I was doing at the time, but I proved to myself (and hopefully to you) that small steps are much more successful at making big change.

And I’ve become the healthiest version of myself because of it.

Get Excited—It’s a Fearless Emotion

These people have a very special talent: They know how to get really excited about their goals, and excitement is another way to keep your flight response off.

So if you want to successfully achieve your dreams, you need to get excited about them! It will help you avoid fear and take projects on with enthusiasm.

For example, my boss just gave me approval to write a book, which is something I’ve always wanted to do, and I was absolutely thrilled!

Instead of letting myself become overwhelmed by the size of this project, I chose to get over-the-moon excited about it, which helps me stay focused and creative.

Have you ever felt so fired up about an idea that you can’t wait to start working on it? If so, don’t ever let that feeling go. It will propel your dreams faster than anything.

But if you can’t make the excitement last (and that’s okay—fear likes to creep in any chance it gets), then try using visualization.

Train Your Brain with Visualization

And if you consistently visualize it every day (and all you really need is just thirty seconds daily), you’ll start to mentally master the action. Then all your body has to do is follow through.

The key to effective visualization is to involve excruciating detail.

What will you do if you fail? What will the alternative actions be? How will you feel?

When you mentally train yourself to deal with potential failure, you won’t give up when that bump in the road actually happens.

Apply These Concepts to Big and Small Goals

You can use visualization to accomplish anything and everything, even the super small stuff, which is where everyone should start.

One of the best ways I’ve used visualization was to mentally train myself to say hello to strangers. It’s such a small thing, but that’s how I knew it could make a profound difference in my life.

Saying hello to strangers was always something that I wanted to feel comfortable with, but I felt this unshakable resistance to it. And it all boiled down to being scared of rejection—something we people pleasers fear most.

Ah yes, I was terrified of how I would feel if people didn’t say hello back. It’s so silly and almost petty, but that’s how my mind was programmed at the time.

So I started visualizing myself doing this super simple task that I was afraid of. I would visualize myself saying hello to strangers in the supermarket while smiling and feeling whole (i.e. not seeking their approval).

I would also visualize the worst possible outcome, which is that they ignore me (sooo scary, I know), and I would visualize how I felt when that happened: still smiling and still whole.

Then I took this visualization into the real world.

Using visualization this way helped me gain the momentum I needed to create meaningful relationships in my life. Today some of the most amazing people I know were once strangers that I simply said hello to.

Sometimes we resist small changes and small habits because they seem too easy to make a profound difference in our lives. But I challenge you to reject that notion.

Every mental, physical, or spiritual block you’re facing can be softened with the Kaizen mentality. Life will become a beautiful opportunity to create something meaningful, and you can do it with confidence and ease.

What passion project have you been putting off?

And what tiny action can you make today that will get you one step closer?

Kari Dahlgren is an anti-diet weight loss coach with a radical philosophy: You can love yourself lighter. Learn the tools to stop binge eating and love your body by subscribing to her new YouTube channel and following her blog!

Freeing Your Truest Self When You’re Anxious to Please