Overcoming Defensive Thinking: If You Try to Avoid Criticism, Read On
By Lars Nielsen 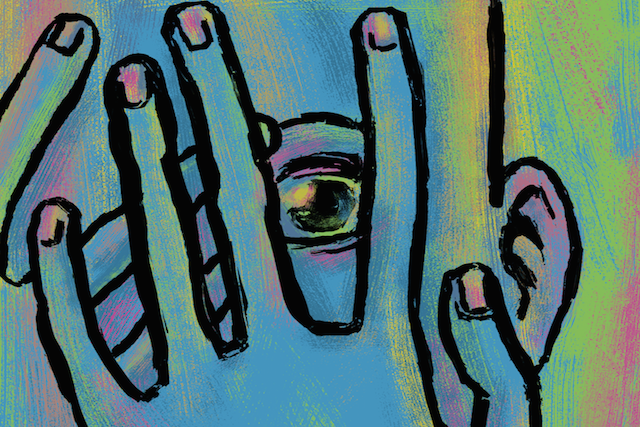 “We are used to thinking of thinking as a good thing, as that which makes us human. It can be quite a revelation to discover that so much of our thinking appears to be boring, repetitive, and pointless while keeping us isolated and cut off from the feelings of connection that we most value.” ~Mark Epstein

I grew up with parents who seemed to love me until I was eight but then turned on me inexplicably.

Suddenly, my father would hit me, two knuckles on top of my head, yelling, “Why don’t you listen?”

My parents gave me grudging credit for my large vocabulary, remarkable memory, and precocious reading, so I invested everything in my mind, but it didn’t make much of a difference. I had no real approval, escape, or safety. As a result, I became trapped in my head, always looking for ways to gain their validation and protect myself from the pain of their disapproval.

I later learned that I was engaging in “defensive thinking”—attaching to favorable situations and trying to avoid anything that might bring criticism.

“But Dad, what about—“, I’d gulp, hoping he wouldn’t yell or hit me. I’d inevitably fail to get a favorable response, and my inner critic would yell at me, too, “You idiot! Why did you say that?”

So, before the next time, I’d tell the critic, “This is what I’m going to say,” and he’d respond, “You better hope you don’t make a mistake, like last time, you dope! You’re supposed to be so smart, but you’re stupid!”

My father’s alcoholism, with its predictable unpredictability, made my ego’s maneuvering useless. No matter how feverishly my mind worked to protect me, the abuse continued.

In college, for the first time in years, I experienced a healthy emotional life, as my wonderful friends accepted me for who I was, not who I tried to be.

But when I came home after graduating in July 1977, with time between college and graduate school, I regressed from age twenty-two to age eight.

I anticipated my father’s rages and insults and struggled to hold on for three months.

I’d talk with wonder and excitement about Nietzsche and Hume, and my father would sneer at me, “The problem with people like that is that they didn’t do enough dishes.”

I knew this was a thinly veiled criticism of me, since I’d invested so much in my own mind.

Worst of all, I knew the sneer compensated for the fact that I was now taller and bigger than he was. He couldn’t reach the top of my head to hit me anymore.

But words hurt, and those did. The inevitable conclusion: Maybe I was worthless.

I’d wondered that at age eight. In the same house, I wondered it again at age twenty-two.

My mind would literally race to stay safe, losing the present, blaming myself for the past, and anticipating the future, with dread, in a futile attempt to escape abuse.

One night, after returning from a trip I’d taken without my father’s approval, my mind simply stopped its chatter. Perhaps it happened because I realized how little power I had to change my situation. It was the first time I could ever remember feeling safe, despite my environment.

I was totally absorbed in the present moment.

At first I thought it was depression. I only realized later it was something else.

Although my mind eventually resumed its chatter, I realized that, even in the most insecure of places, I could feel the emptiness of peace.

We start engaging in defensive thinking because our inner critic works like a prison guard to provide a minimum of safety against some exterior threat.

If you couldn’t explain the intimate betrayal of your parents, you had to find an explanation for it in your own behavior. The mental alternative, the absolute randomness of the event, was too awful to contemplate.

Let’s say I was working on my father’s most obsessive pastime, his yearlong quest to ready enough wood to heat the house all winter. I’d cut the wood badly; insecure, I’d hesitate and I’d fumble. I wouldn’t know how to operate tools (I’d become frightened of them, thinking them extensions of his explosive anger).

For years, my father grabbed tools out of my hands in frustration, insisting on doing tasks himself; so my hesitation, and his impatience, simply got worse. He thought I was lazy. He’d grown up in a tough environment but was unaware that he’d made my environment just as bad.

Maybe if I criticized myself first, I thought, I’d head off his criticism. The tragic part of this type of behavior is that it creates a lifelong pattern of self-abuse. If you do that often enough, over a long enough period of time, even after the original critic’s death, your inner critic will be only too happy to continue.

I tried desperately to escape his negativity, as one tries unsuccessfully to escape a wave. I didn’t ride it gently or dive below it, but tried to jump above it. I knew that the inevitable end of such futile jumping was to be dashed against the hard ocean floor, powerless.

My own internal critic was, if anything, more savage than my father. Since I couldn’t understand why a loving father could change so completely out of the blue, the problem had to be me.

I lost too many days to “defensive” chatter, particularly during high external stress. I’d spend hours talking to my ego, trying to justify my likes, such as reading and music, and to avoid dislikes, like physical labor and mechanical challenges, since I knew, from experience, these would always produce father-disapproving results.

How did I overcome this internal situation that threatened to ruin my life daily?

Mentally healthy individuals have an inner parent that talks their internal child through difficult times. Sometimes, due to long-term trauma or a one-time event, that stronger part, that inner parent, becomes unavailable.

I was always an extremely gifted advisor to other people, yet I couldn’t provide the same service to myself. Now I can.

2. Look carefully at the defensive mind and its chatter.

My first therapist suggested a Buddhist approach and vocabulary to our work together.

Suddenly, I discovered meditation and slowed down my experiences to review both my reactive and automatic thought patterns. I realized that the mind can uncouple itself from the false self of the ego entirely, observe, and step into core, silent authenticity.

At that time, I discovered a life-saving book, Joan Borysenko’s Minding the Body, Mending the Mind. I would begin to relax as I’d read her descriptions of how the mind functions, what the mind was made for, and what is was not intended for.

I’d follow her advice to close my eyes, breathe, and simply watch with inner eyes as my mind became empty; and finally, best of all, I’d remember to slip into the pose of the “witness,” the observer behind my “chatter.” In fact, Borysenko brought home to me the fact that the internal “observer” is the greatest servant of the nourishing inner parent.

The book also characterized the ego as “the Judge” with its negative protectiveness, and so I began to review how I mediated my thoughts, experience, and existence.

3. Get in touch with attachment and aversion.

A book I discovered later, Mark Epstein’s Going to Pieces Without Falling Apart reaffirmed and further explored what Borysenko had introduced me to, the dynamic of “attachment” and “aversion”—the two-headed monster of self-induced delusion and pain.

Our ego wants to “attach” to external praise, while it wants to “avert” criticism.

It’s unhealthy to be dependent on outside approval in this way, and it’s also not conducive to healthy relationships. Defensive thinking cuts us off from the present and prevents us from dealing with others authentically, since we’re focused on getting a certain reaction from them, not simply engaging with them.

Also, it’s fruitless to try to avert criticism, since it’s inevitable. And we can’t always be sure someone’s actually criticizing us. As I dug deeper, I discovered that, all too often, I projected my trauma-induced inner critic into the actions or words of people around me.

I attributed random talk and actions to some larger rejection of me, when the only person consistently rejecting and criticizing me was, in fact, myself.

“Even-mindedness,” as Borysenko calls it, is the sure way to peace, since it enables us to disinvest from both external praise and blame.

4. Re-experience the pain behind the inner critic.

After decades of therapy, extraordinary persistence, hard work, and courage, I finally re-experienced the dislocation of my father’s rejection of me. I sat in a room with someone I trusted watching me in silent sympathy and support, as my body convulsed with racking sobs.

I could now be eight again so that I could re-experience the trauma, sympathize with myself, reintegrate, and move on.

In those therapy sessions I learned that my thinking was a defense mechanism. It was a flimsy barrier against the overwhelming pain in my gut, a life-affirming yet almost intolerable pain I could not approach for decades.

Suddenly, after violent re-immersion in that eight-year old’s world, I developed the inner holding tank for feelings that healthy people have so they don’t bounce from emotional gut pain into defensive mind-trapped thinking.

But I could never have reached that place of direct and terrible re-experience without slowly peeling away the layers of defensive thinking.

Allowing myself the direct pain experience without any attempt to rationalize it freed me from the internal critic, the involuntary product of trauma.

I could accept the awful truth: I didn’t have an explanation for my father’s changed behavior, and it wasn’t my fault.

My critic was the tragic misuse of a fine mind never meant to substitute for authentic feeling, whether joy or pain.

When both my sons were born, despite the overpowering stress that my inner critic subjected me to (I thought I’d be a terrible father due to my own father’s behavior), I felt this incredible peace.

It was like gentle submersion into a quiet, clear pool.

The water was warm, the solitude womb-like, and the entire experience felt like perfect peace.

Only emptiness allows such an experience.

Everyone suffers from self-criticism, but the healthiest people temper and compensate for their inner critic with a nourishing inner parent.

If you can peel back the layers of your defensive thinking gently and compassionately, then do so.

If, as was my case, your inner chamber of emotion is so unreachable due to the terrors that lurk there, then bring in a trusted external partner, a therapist, who can be the surrogate you need in order to patiently rediscover the nourishing inner parent who is your birthright.

Observation and mindfulness can be keys to unlock the doors of practiced defensive thinking.

Consistently open the channel to that inner nurturing presence, stay present as you experience life, and get behind the critic’s reason for being.

As a result, you can liberate yourself from a defensive life.

Live free, and find a safe and healthy way to feel the joy of fertile emptiness.

Lars Nielsen has decades of experience helping individuals and businesses discover and share their core message. Whatever your message or audience, grab his Make YOUR Message Matter Cheat Sheet and put his time-tested techniques to work immediately.