People Aren’t Always Out to Get Us: The Good Beyond Appearances
By Ameena L. Payne 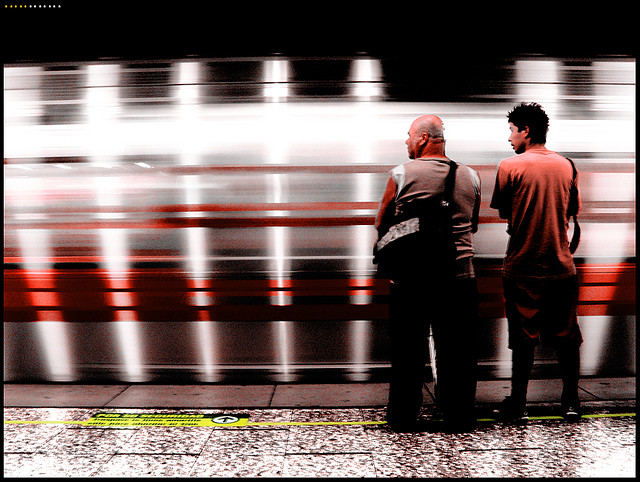 “If you judge people, you have no time to love them.” ~Mother Theresa

Last year, I was on the CTA (Chicago’s public transit) heading to class to take an exam. Rather, I should say that I was rushing to class. I wasn’t running late, but I often got caught up in the hustle and bustle of Chicago during morning rush hour.

Something about the “rush hour” energy made me feel a bit anxious; and, although I, along with others, am at the mercy of the CTA with its frequent delays, rarely do riders strike up conversations with fellow passengers.

After making my usual transfer to another train line, I was able to find a free seat (which is hard to come by during rush hour), and I sat down.

I acknowledged the woman I was sitting near just enough to immediately write her off as being someone I wanted to ignore. She looked at me and smiled, and I gave a half smile back but turned slightly away to make it clear that I didn’t want to engage in chit-chat.

I am a warm person, hardly ever without a smile, and usually very open, but I was having a day where I just felt nonchalant toward other people, and the last thing I wanted was to feel “trapped” in a conversation with a “lowly” woman on the train who might pester me for money.

I pulled out my textbook, clutch in hand, to begin “reviewing” for my exam.

She began engaging me in small talk, and, after a few minutes, my disposition changed. My short answers became longer, and I became genuinely interested in what she had to say.

A year or so later, I have forgotten the specifics of everything she said to me, but I remember getting off the train feeling light-hearted after she told me a bit about her life. We had a short but beautiful conversation.

I got off at my stop, walked the couple of blocks to class, and entered the classroom when I realized I left my clutch on the train.

No time is a good time to lose your wallet, but I was leaving for the Middle East soon and would have to replace everything before my trip.

“Distract someone with small talk in hopes they’ll leave something behind,” a peer commented when I retold the story (after the incident had played out). I actually felt a bit at ease despite the situation, and the thought of trickery didn’t even pass my mind.

My professor excused me, and I headed back to the station, chalking it up to my carelessness, thinking, “I’ve really got to slow down. What was I rushing for at any rate? Life is not about rushing.”

I got to the station, and as I explained that I’d forgotten my wallet/clutch, they informed me that a woman had notified a CTA employee—just as the train left the station where I’d gotten off—that someone had left a clutch on the train, and that I’d gotten off at the specific stop.

I rode the train to its last stop where all the lost and found items are dropped. When the CTA employees handed me my wallet, everything was inside.

I learned a few valuable lessons that day—for one, not to prejudge someone’s character because of their appearance; always be open because you never know who will be in a position to lend a helping hand.

At times, living in the city, it becomes so normal to ignore each other and to write each other off. I am so thankful to have had a humbling experience that showed me that when we allow ourselves to slow down and be receptive to others, we can learn from. And, we can be helped by people from all walks of life.

This experience reminded me (and may remind you) to:

We expect everything to be instant. In fact, when something is “new and improved,” it is always faster. We miss out when we live our lives like this. The quality of our lives cannot be measured by their speed. Rushing produces shallowness because you never have time to dig beneath the surface of another person.

Try to minimize criticism and judgment.

Be aware when you’re judging another. Deeply consider the roots of judgments. Respond to others with compassion rather than reacting on a fearful or indifferent impulse.

Be more receptive and approachable.

We all have those days when we feel like we don’t want to be bothered with others. While I strongly advocate quality alone-time, I feel that when we’re agitated by others, that’s usually when a smile or a kind word from someone else can go a long way.

Be open to others’ kindness. Live with a sense of curiosity; every moment is an opportunity for connecting and learning.

Ameena L. Payne is a soul learning to follow its Divine Path—passionate about encouraging mindful living and social responsibility. The activities I involve myself in are always an expression of the essential part of the person I am—connected, positive, creative, and adventurous. Together we rise in consciousness.

The Surprising Secret to Being on Time