How to Reach Your Goals Faster: A Simple Technique to Try Today
By Maria Brilaki 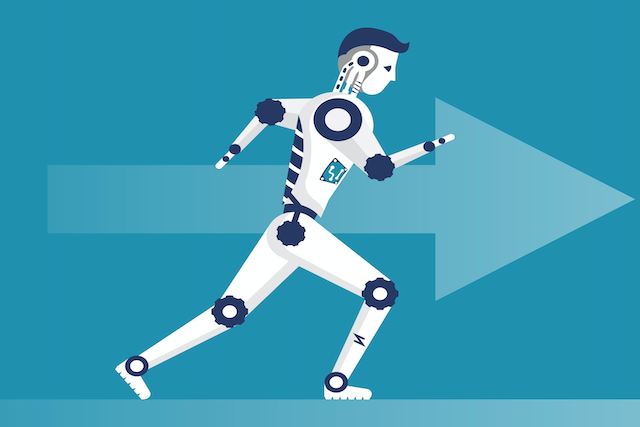 I used to think that getting to a goal only required tangible action. It was a simple equation:

Yet, life is not always that straightforward. It’s not always just about physical action.

Just a few years ago, when I was building my first business, there was something getting in my way, something that had nothing to do with the physical action I took. It was worry.

Building a business has the magical ability to bring any type of fear out in the open. Unexpectedly, I found myself thinking:

It wasn’t long before I realized that these types of thoughts were interfering with my progress. The more I focused on them, the less physical action I took for my business, and the more likely I was to feel burnt out.

Most importantly, the more I worried, the more likely I was to take the wrong physical action, the action that would count more as “busywork” rather than “effective work.”

I knew I had to find a solution out of this. Ugh. “If I were a robot, then I wouldn’t have any of these problems!” I thought.

Think about it: If we were robots, then these simple physical action equations would actually work. We would wake up in the morning, do our thing, stick to our schedule, and lo and behold, our dreams would materialize. No struggle, no “I don’t feel like doing it,” no distractions, no “What if it doesn’t work?”

If we were robots, then our productivity would be close to 100 percent, and we would achieve our dreams two times, four times, maybe even ten times faster! Plus, we would get there without struggle. Aahh, that sounds so nice.

I realized that physical action was no longer enough. We also need to be in the right state of mind—let me say, the “robot” state of mind.

If we only take physical action, then we’ll only be working harder for nothing. For example, if you want a promotion, you don’t to only work harder; you also need to communicate your accomplishments so that others know how valuable your contributions are.

However, if you’re afraid to stand up for yourself, then you’ll be left feeling unappreciated and undervalued.

So the winning equation is: Work harder + develop ability to stand up for yourself = promotion.

But let me clarify: By robot, I’m not referring to deactivating our feelings. Au contraire! We need feelings to march forward. We need excitement and optimism. We even need worry sometimes. What we don’t need though is excessive worry.

Worrying about an issue for five minutes and then doing something to solve it isn’t excessive worrying. When we worry about things we can’t control, ask “What if this and that?” and second-guess ourselves, we just get in our own way.

But how do you worry less? How do you turn self-doubt? How do you think more like robot? The answer lies in this Master Technique.

Here’s what happens when you don’t think like a robot:

Say you want to get leaner and fitter. You go to a yoga class where everyone is doing better than you.

You start thinking, “I’m so unfit, I will never become as good as they are.”

After an hour of berating yourself about not being fit already, you leave the class feeling exhausted, intending to never go back.

Your mind is stopping you from getting to your fitter and leaner dreams.

Now here’s how you’ll get yourself back to thinking like a robot, if only you use this Master Technique.

Use “The BUT Technique” to Reach Your Goals Faster

With “The But Technique,” you don’t let destructive thoughts stop you.

How much time are you already spending judging yourself or worrying?

Once you start practicing this technique, you’ll instead spend this time on things that actually make you productive. Why?

Because negativity, or just aimless worrying, will no longer stop you! You’ll be unleashed! A force of nature!

How does “The BUT Technique” work?

“I’m so unfit, I will never become as good as they are.”

Why This Technique is So Powerful

The “But” Technique doesn’t fight with your negative, discouraging thoughts. Doing so would leave you feeling worse than before. Instead, it accepts them and then it moves you forward.

And then with every “but” you feel better, until you’re able to say, “Everything is alright” and actually believe it.
And that’s exactly how you take mental action to achieve your dreams. The more you practice it, the more you can act like a robot—in a good way!

I’m now using this technique almost daily. Whenever I find myself worrying about anything, I immediately pull it out of my toolbox. Yes, I worry, but, but, but…

So now it’s your turn to practice this technique! Take any negative worrisome thought and add but, but, but. Let me know how it works!

How to Promote Yourself Authentically to Gain New Opportunities