Wanting to Feel Good and Look Good: Why Do We Do What We Do?
By Lori Deschene 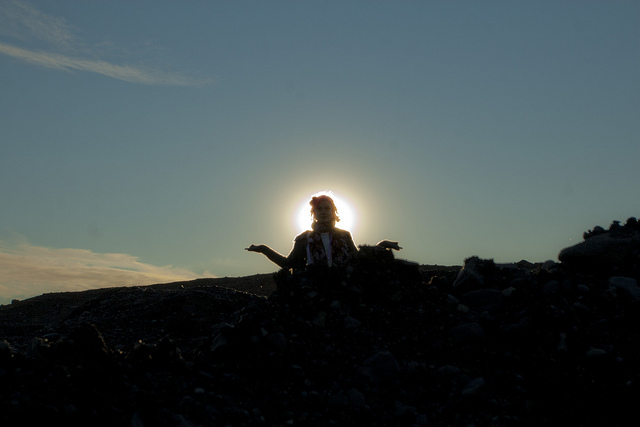 “Nothing is either good or bad, but thinking makes it so.” ~Shakespeare

Have you ever stopped to question why you do what you do? Or how it looks to other people?

I’ve done this pretty much all through my life. In fact, an outsider might say that I’ve spent more time analyzing my place in the world than experiencing it.

In some ways, this is true, and not uncommon for someone who’s chosen to be a writer.

As a young child I used to silently mouth the words of what I’d just said after every sentence I uttered.

Even as a kid, I felt this need to rethink my thoughts after speaking them, and because I was too young to realize it looked strange, I did this while moving my lips.

I wondered why I’d said what I’d said, and how others might have heard it.

This followed me through life, and later manifested in a desire to not only say the “right” thing, but also to do it.

Never was this more important to me than in my mid-twenties, after I’d spent the majority of my adolescent and young adult life self-destructing and unintentionally hurting others—something that, I feared, confirmed that I was a bad, selfish person (ironically, the same fears that led me to self-destruct).

I wanted so badly to be good. To do good. To look good. I imagined and hoped that this was the key to feeling good.

I didn’t want to be selfish—that was bad. So I concluded that I needed to be selfless.

I didn’t want to crave so much attention—that was bad. So I concluded that I needed to be humble.

I didn’t want to be or be seen as manipulative—that was bad. So I concluded that I needed to prove that I had good intentions.

In retrospect, I can see that these realizations and conclusions sparked my initial interest in the personal development industry six years back, and they informed how I did what I did.

When I was spending most of my time helping people, often sacrificing my needs to do it, I felt I was finally embodying everything I should embody.

I was putting other people first. I wasn’t hoisting myself into the spotlight. I was doing the right things for the right reasons.

I was being good. And as a consequence, I imagined, I looked good. And I finally deserved it.

No one in the outside world could possibly reflect back to me the former identity I found so shameful, because I was doing everything in my power to be the opposite of who I used to be.

This isn’t to say this was my sole motivation for making the choices I made; but I realize now these subconscious thoughts and beliefs underscored my conscious intentions and decisions.

Over the past couple years especially, as I’ve gone further down the rabbit hole of what it means to be authentic, I’ve realized that things aren’t quite so black and white.

Who I was before wasn’t bad, and trying to be the exact opposite isn’t good—but more importantly, I can’t be possibly be good to myself if I’m so focused on what’s bad and good.

And I can’t be good for other people unless I’m good to myself.

So what have I learned and changed as a result of this realization?

And I want to ask this question without repeating it my head, like that little girl moving her lips, questioning if it’s bad or selfish to say that.

Because I’ve realized this is the grey area: finding the sweet spot between what makes me feel good and how I can use it to do good.

That means writing some, editing some, and leaving myself time for new projects, both related to Tiny Buddha and otherwise.

Because I’ve realized this is the grey area: knowing it’s okay to want to be seen, so long as it’s not to confirm that I have value, but rather with a confidence in the value of what I have to share.

That means putting myself out there more when opportunities come up, as I did recently when an editor friend invited me to be part of a feature in a nationally distributed magazine.

Lastly, I’ve learned that I don’t need to worry so much about proving my good intentions. Because ironically, when I’m worrying about whether or not I appear to be doing things for the right reasons, I’m disconnecting myself from those reasons.

I now know my intention more clearly than ever before:

I enjoy helping people by sharing my experiences and insights and enabling others do the same; it’s neither selfish nor selfless, neither right nor wrong, neither good nor bad.

It’s blissfully grey, and yet illuminated by a renewed sense of purpose. And as a consequence, I’m no longer metaphorically mouthing those words, wondering why I said them and how they sound to others.

Now I have a why that’s based in joy, not fear. And the clearer I’ve gotten on that why, the more it’s shaped my how.

Why do you do what you do? Does that affect how you do it? And do you feel good about that?