Recovering from a Difficult Childhood: How to Reclaim Yourself
By Katherine Mayfield 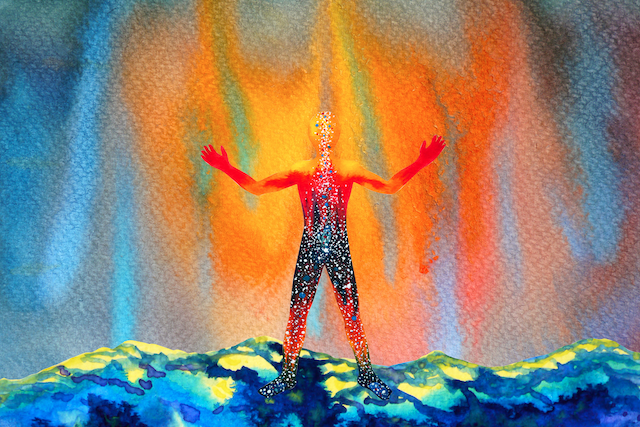 Recently, I had one of those flashes of insight that burn away the illusions I learned as a child in a dysfunctional family and help me see myself in a new light. I saw through an invisible belief that I’ve held for a very long time—the belief that I am not in control of my life.

Standing in line in the grocery store and twiddling my thumbs, my monkey mind ran through the list of what I could be accomplishing if I didn’t have to wait in line doing nothing. And like a bright gift from above, an idea flew into my mind: If our thoughts create our reality, then I could be creating my next experience of reality right then, while I waited.

In that moment, I realized that even when I feel like I’m not in control of a situation, by letting go of resistance and choosing to create the next situation with my thoughts, I can be more in command of what happens in my life.

I grew up with no understanding whatsoever that I could create my life the way I wanted it to be. My father was very rigid in his beliefs and actions, and my mother was very impulsive. Consequently, my world swung back and forth between needing to follow rules and regulations, and suddenly having the rules change mid-stride so that I had no idea what to do next.

I carried the assurance that life could fall into chaos at any time into adulthood, and though I have consistently moved forward in my life, I have never felt truly in control, because of the way I grew up.

The Law of Attraction and the Unconscious

As a long-time student of the Law of Attraction, I’ve had varied success with my attempts to create my own reality. Sometimes it has worked; sometimes it hasn’t.

I wasn’t able to figure out why until I realized that on some deep, subconscious level, I still expected my mother to come along and spoil everything I’d worked for.

That half-buried expectation made it difficult for me to believe in my own creations and receive them, because my “inner child” continued to feel very vulnerable in the face of uncertainty, even if what was unfolding was positive.

I know my mother had a good heart, and I have no doubt that she was well-intentioned, but her own childhood was challenging, and consequently she was a rather unstable person—certainly an unstable role model for me, as the only girl in the family.

My early experience created a general feeling of instability in my life, which made it easy for me to fall under the illusion that I had no control at all over what happened to me.

When we pay attention to the relationship between how we experience life now and what life was like as we grew up, we begin to see correlations between what we learned early on and what we’re experiencing in life now.

By developing the “witness” aspect of our inner selves (some might call this “soul”), we can simultaneously feel what’s happening in the moment, and also get a larger view of what’s really going on deep within the psyche.

This allows for a process of “sorting through” the tangled web of beliefs, behaviors, and self-images we wove as children in order to get along in a dysfunctional family, and allows us to uncover our authentic selves.

Trapped in the Mirror

Sometimes, habitual feelings, actions, and responses are nothing more than an imitation of someone who needed us to be like them. We may have learned early on to “mirror” someone else in order to be safe.

I’m reminded of the incredibly liberating observation I made one day several years ago after experiencing depression for most of my life: I discovered that I didn’t have to be depressed.

I had only developed the habit of being depressed because my mother needed someone to keep her company in her misery. Mirroring her state of mind made her more comfortable, and thus made my life easier.

That realization totally changed my life, and hoisted my self-esteem a few notches as well.

If you’ve ever had a moment where your response to a situation is unexpected and over the top, seemingly out of proportion to what happened, you’ve probably been triggered by an unconscious memory in your psyche left over from childhood.

We don’t generally become aware of these “hot spots” until we spend a bit of time paying attention to why we do what we do, and who we believe we truly are.

So here are five steps that can help you blast away some of the illusions you grew up with and reclaim your authentic self:

1. Pretend you’re a person of the opposite sex, and review your early life from that perspective.

Focus on how the way you were treated in childhood might still be affecting the way you live now. This helps you to truly step outside of your own identity and see the scope of your life from a totally new perspective.

2. List three difficult situations that seem to keep recurring in your life, no matter how hard you try to do them differently each time.

Do those situations remind you of anything (or anyone) from childhood? Uncovering an unconscious constellation of emotions from the past can help you free yourself from persistent difficulties.

3. List five qualities of your identity that you’ve always wanted to change.

4. The next time your reaction to a situation seems out of proportion to what happened, try to figure out whether the situation felt familiar in any way.

Over-the-top emotions can be our psyche’s way of calling attention to old unhelpful beliefs and illusions that no longer serve us. If the situation felt familiar, try to get a bead on why—what does it remind you of?

When you’ve got the answer, release the emotion (I like to grit my teeth and shake a sofa pillow, or open a window and shake my hands), and imagine that you’re releasing that old previously unconscious experience at the same time. Eventually, you’ll notice that the triggers don’t have as great an effect on you.

5. Whenever possible, find a way to express the emotions you’re feeling.

Most of us stored a lot of unexpressed emotion as children, which we may turn against others, or against ourselves in self-sabotage or self-disgust.  I like to express the bigger emotions in private—that way, I’m not “dumping” them on someone else.

The more you can release your pent-up feelings, the more of the past you’ll clear away.  Go to a sad movie and cry buckets, or whack a bed with a plastic bat—whatever works for you. Releasing emotions releases energy, which you can then use to create a more authentic life.

Healing from a difficult childhood is not a quick-fix proposition. In my case, because I experienced emotional abuse, I’ve had to work for many years to let go of the negative self- and world-views I developed.

But with every strand of the dysfunctional family tapestry I unravel, I get more clear on the ways in which I learned to interact dysfunctionally with the world, and as I allow myself to let them go, my life gets better and better.

We can only become enlightened by acknowledging and releasing what weighs us down: the less conscious aspects of the psyche that carry the burden of the past.

The Keys to Finding Happiness After a Traumatic Childhood