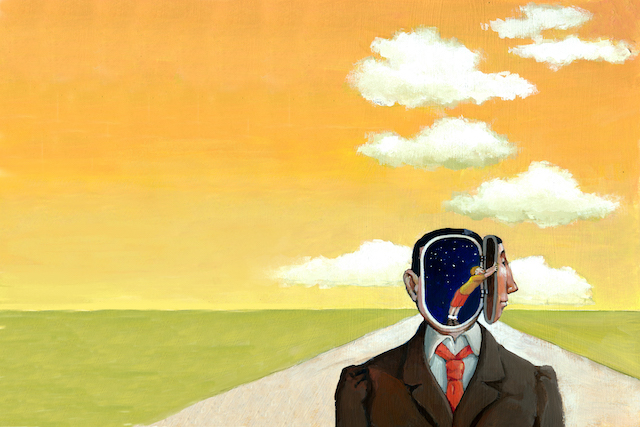 It’s the last place in a million years I ever thought I would find myself.

Stuck in a day job I had originally taken to fund my art and still feed my family when times were lean. It all sounded so logical back then.

Except that after several years, this “I” that was showing up to work had zero passion, was totally unmotivated, and not exactly someone I was too proud of.

Which was very strange since I was always so committed with my dedication to my artistic endeavors, prior to this particular career move. “Who was this guy?” I thought.

But hey, it was all to keep the music train rolling along while I worked on my art and building up our fan base.

Then the band broke up.

Suddenly without the vehicle to deliver my artistic message I was like a ship without a rudder. The job felt like I was still living the joke but couldn’t remember the punch line anymore.

But then I was in a bit of a conundrum.

There was this other “I” who, during this same period, had rediscovered the storyteller I had always been since childhood.

This “I” started blogging, writing posts to inspire others to unearth their own unique story and live their passion. A first eBook was near completion. People were commenting and signing up regularly to my list.

This “I” felt totally alive. Totally confident. Like I was doing some good in the world.

Likewise, when I was playing guitar or producing other musical artists. People were consistently saying thank you whenever I was engaged in this work.

So then who exactly was this “I” who was showing up to that day job? This self that was feeling so stuck? The one with all these self-limiting beliefs?

It was almost like I had a different “I” for different situations in my life. It was really confusing.

Did you ever have that feeling?

I finally found the clarity I was seeking after attending a Buddhist lecture series recently.

The Buddha says that since beginningless time, we have been grasping at a self that doesn’t really exist—a self that changes like clouds passing overhead.

According to Buddha, this self-grasping is the root cause of all human suffering, because we’re clinging to the delusion that this self and our own happiness is more important than anyone else’s.

I know, that sounds scary, right? Clinging to someone who’s not really there?

If our “I” doesn’t really exist then who’s driving the bus, right? Who decides we’re going to wear that blue shirt today? Who tells us to take a shower and get ready for work?

That’s a fair question. (I was thinking the very same thing when this was first presented to me)

But I learned that if you really believe there’s this independently existing fixed self called “you” then you should be able to point to it, right? Like your refrigerator over in the corner. “Yes, there ‘I’ am.”

So to see if this was true we went through the following exercise.

You get to a centered place in your meditation (or just a quiet place, if that’s not your thing) and you contemplate a version of a self you’re very familiar with. Preferably one that feels stuck in some aspect of your life. (Bingo! The guy at work. That was easy)

Then you just try to observe this self in action, as though in your mind’s eye, you’re looking over their shoulder and they don’t know you’re there. Then you ask yourself, “Is this really the person I always wanted to be?”

Well, it was quite obvious to me the answer was no. So then you set out to locate this self to test the theory.

Now if you just use common sense and look in the mirror you basically have only two choices where you might find this self. Either your “I” is located within your body or it’s in your mind, right? Where else could it be?

So this self is not located inside your body, would you agree?

Okay, so then is your “I” located inside your mind?

Well, think about it. You wouldn’t say, “I’m taking my mind shopping” either, would you? As though your thoughts are off to the mall? I’ll just leave my body home since that’s not me. No, you wouldn’t say that either.

And something else: don’t you say, “These are my  thoughts” as though your “I” is in possession of them? Logic dictates that the possessor (your “I”) can’t also be the possessed (your thoughts) at the same time.

So if this self can’t be located in your mind either, then where is it? What are we to conclude?

It doesn’t really exist. It’s an idea, a name you ascribe to this collection of changing thoughts you call “me.” An insinuation.

But fear not. You do exist.

Just not in the fixed reality you thought you resided. You cannot point to this self because it’s nowhere to be found. Really, try to point to it right now.

So if your “I” is really just an “I”dea, then what would you do if you came up with a bad idea? Like say, a self that believed they were stuck in a day job?

What’s the opposite of self-limiting beliefs?

Why not identify with that instead?

When I walked out of that class and began meditating on this concept over the following weeks and months, something eventually happened.

I didn’t view this job in the same way anymore. It’s not that I had any renewed passion for it. I didn’t. But I realized that all the years I’ve been in this field have not been for naught. It served my creativity in a way I never saw before.

I’ve been working in high end audio visual technologies with some of the wealthiest New Yorkers, living in these amazing spaces most only get to see on TV. Some are characters I could never invent in my wildest imagination. So the job has become the muse for a book I’ve been writing over the last few years now.

Writing has opened up a door and shown me new possibilities with my career. Suddenly people are asking to pay me for my writing.

An audience is building. A tiny voice says, “Keep going.” It’s the voice of a different self. One who knows it’s all going to work out.

There’s another premise in Buddhism called patient acceptance. You can’t force life to change. You create the conditions for change to come about. Then you accept that it will come when its time has ripened. Not before.

Maybe you can’t always change a situation by just snapping your fingers and making it go away. But you can change your perception of it.

Change your perception and you change the world.

If you’re free to realize that this self is just an idea, then you’re also free to let go of those selves that don’t serve you because they don’t produce a positive perception of events.

You can learn to recognize them when they crop up. You can even have some fun and give them names. When they show up you can just say, “Take a hike, Larry (or Mary)!”

You’re free to see a seemingly difficult situation as a challenge instead—an opportunity to transform it into something positive.

And you’re free to watch with wonder what happens when you view each moment of your life in this way.

Freedom is yours when you let go of “you.”

Here’s to your freedom!

Acceptance Is Not Passive; It’s the Path to Peace