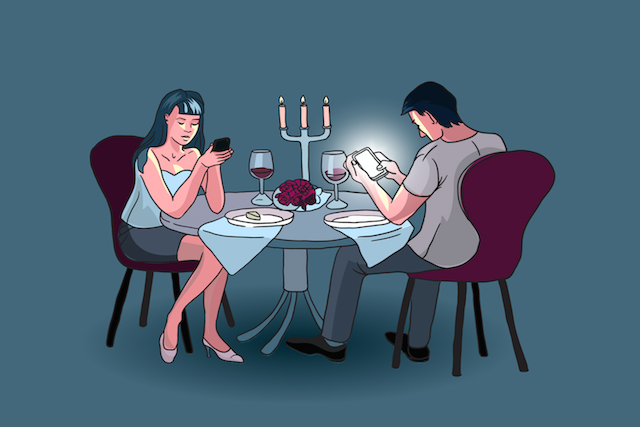 “These days, whether you are online or not, it is easy for people to end up unsure if they are closer together or further apart.” ~Sherry Turkle, Alone Together

There was rarely a time when my partner didn’t have her phone in her hand or, at the very least, in a place she could quickly grab it.

We’d go out for a meal and it’d be there by her plate, positioned so she could dip in and out at any lull in the conversation.

We’d take a walk and she’d have me in one hand and it in the other, ready to take a photo or catch the next Facebook notification.

Even when we were in bed, if it wasn’t glued to her face, it’d be right by her side, lying between us like a small child who’d snuggled in for the night and ruined any chance of intimacy.

It wasn’t good for our relationship, to say the least. Especially considering that, however unhealthy her relationship with her phone was, mine was worse.

I didn’t realize it at the time. But in hindsight, I can see that most the time she retreated into her phone was when I’d long zoned out and been absorbed by mine: some random article or new app I’d downloaded, updates on the game, or a group chat with work colleagues.

In that sense, we were perfect for each other. And looking around us, there didn’t seem anything too strange or excessive about our behavior. All our friends and the couples around us were also interacting with each other from beyond their screens, and they seemed perfectly happy—at least according to their Instagram posts.

But something wasn’t right. Sure, we had our problems, I knew that. But it was something more than that: we were missing that deep feeling of connection. You know, that feeling you get when your partner understands you, without having to say a word. Or the fulfillment of being alone together and feeling like you’re the only two people in the world.

Surely this fundamental pillar of how you feel about someone had nothing to do with our little glowing screens. So, none the wiser to what was going on, things gradually got worse and, eventually, we broke up.

I wasn’t blind enough to see our phones had something to do with it, though. I mean, not being able to talk for two minutes without one of us phubbing the other was clearly an issue. And the non-stop messaging whenever we were apart couldn’t have been good for us.

So when a similar thing started to happen with my current partner—both of us spending more time with our devices than each other and a feeling of disconnection growing between us—I knew there was something going on. And if one thing was for sure, whatever it was, I wasn’t prepared to let it ruin another relationship.

I started to look more closely at our phone use and put it under the microscope: Why was it happening? Why did I prefer Candy Crush over spending time together? Why did we talk more via text than real life?

What I found completely changed our relationship. Not only that, it changed my relationships with friends, family, and everyone I meet. And what’s best about it, I haven’t had to disconnect from social media or give up any of my beloved devices.

I discovered the real issue wasn’t the physical presence of the phone, but rather how it had changed our idea of communication and influenced how we interact together.

A prime example of this is phubbing—when your partner uses their phone while you’re talking.

This was an everyday occurrence in my relationship. My partner would often ask me, “How was your day?” and start phubbing the hell out of me just moments into my response. I always thought she just wasn’t interested and was just being rude, but that wasn’t half the story.

Because instant messaging was now our primary mode of communication, we’d trained ourselves to take words solely on face value—like you would a text or email.

And so we would never stop to look beyond what was being laid out on the surface and consider all the other information-rich signals that make up the majority of communication—facial gestures, eye contact, tone, body language, and the emotions driving them all.

Whenever we spoke, it was more like a means to an end. Something we did because we had to. Conversation was a chore that consisted of generic, predetermined questions and equally humdrum answers. All delivered in a way that was monotonous and unappreciative of the other’s attention and contributions.

So it’ll be no surprise to hear our conversations were never stimulating and meaningful. And because of this, we robbing ourselves the chance to foster that deep sense of connection and understanding that’s so vital to a healthy relationship.

Phubbing was only the tip of the iceberg. But it was enough to realize the fundamental effects phones were having on my relationships and wake me up to how they were undermining my ability to connect with people.

Today, by simply being more aware of how we use our devices, me and my partner are closer than ever.

What’s more, now we don’t use our phones as much as the average couple, but it’s not because we’re following orders from a couples therapist or because some rule from a relationship handbook told us to. We do it because we stay up all night talking and forget about them. Or because we go on a long walk and accidentally leave them at home.

We do it because we’ve got back in touch with those deep, visceral feelings that nothing on Twitter or Facebook could ever come close to. And because there’s no way we’re going to let them fade away again.

Joseph Pennington is a freelance writer, Master's student of Mindfulness, and the creator of the mindfulness voice app, Bebot: The Three Minute Breathing Space. Find out more about the breathing space and hear directly from Bebot, your mindful robot friend, by subscribing to her newsletter.

50 Ways to Show You Care Without Spending a Dime