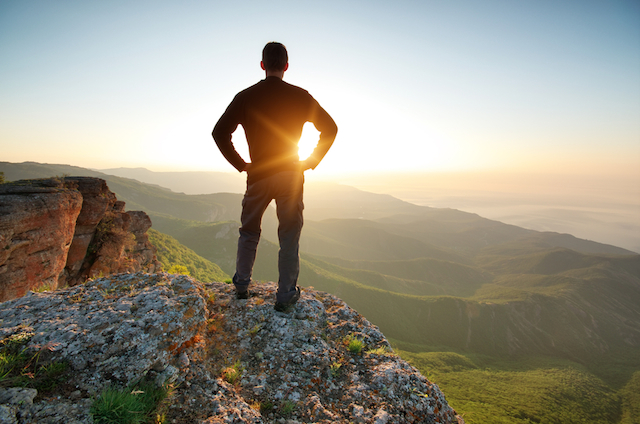 “You are very powerful, provided you know how powerful you are.” ~Yogi Bhajan

Some might say I was a late bloomer. I only discovered how powerful I really was at twenty-nine.

My childhood and teenage years were horrific; I was severely bullied from when I first walked through the school gates to when I left for the last time. In my early formative years I was laughed at, verbally abused, and completely socially isolated.

I was the equivalent of a lepper. No one wanted to be my friend for fear they would “catch” what I had and be bullied themselves. My parents moved me from school to school with the hope that I would be given a fresh start, free from torment.

The bullying continued. Eventually, I stopped telling my parents, as I could see it was visibly upsetting them. I felt utterly powerless to stop the torture for my entire school life.

At twenty-nine I discovered that those childhood scars were actually open wounds. Two years prior I had been engaged to my long-term boyfriend, who was mentally abusive and controlling, but because that was all I knew, I was completely unaware that the relationship—and him—were toxic. Soon after we married his behavior became much worse.

I felt as if there was no escape; after all, marriage was supposed to be forever. I rapidly fell into a deep depression. At my worst point I confided in my parents and they paid for me to go to arguably one of the best facilities in the world.

Suddenly, there I was attending assertiveness and self-esteem classes. I was learning about what my personal rights were and how to protect them. I stopped focusing on what was happening to me and instead focused on what was within my power—what I could personally do about it.

And before I knew it, I changed from being powerless to powerful. Reflecting back, this shift was by no means accidental, there were three universal steps I took that can transport absolutely anyone from a powerless state into a powerful one.

My ex had imposed his opinions on me for years prior to my breakdown. Through his abusive behavior he taught me that my thoughts, opinions, beliefs, and feelings just didn’t count. Eventually, this caused my self-esteem to plummet, which led to my depression.

One of the most valuable things I learned while receiving treatment was that my thoughts, opinions, beliefs, and feelings were significant and mattered just as much as anyone else’s! They taught me to speak up in a way that was both respectful and considerate but also communicated my inherent worth.

Have you ever decided to put off a difficult conversation or chosen not to speak up when someone hurt you? If so, speaking up more often will act as an emotional detox and will serve to boost your self-esteem and confidence.

Most importantly of all, speaking up communicates to others you deserve to be treated with consideration and respect, the cornerstone of any healthy relationship.

The next time you are faced with a difficult situation:

If words fail you at first, simply plan what you want to say before your next meeting. Once you begin speaking up more often, you will transform from feeling powerless to powerful.

One of the first things I did in recovery was to do a life audit. I broke my life down into eight areas and rated each area, one being unfulfilling and ten being amazing, with no room for improvement.

I started to think about what my life would look like if all the areas scored a ten. What sort of job would I have? Would I take more time to relax?

Before conducting my life audit I had forgotten I could change the status quo. I had failed to realize how powerful I really was! For the first time in ages I was actually excited for what my future held.

By getting crystal clear on what you want you will move to being in the driving seat of your life, a very powerful position indeed.

Once I was crystal clear I began thinking about a plan to get me from where I was to where I wanted to be.

One of my main aims was to write a novel. I knew this was a hefty goal and would require detailed planning, so I began brainstorming how I could become a better creative writer. I bought the best creative writing textbooks and dedicated one hour a day to working through them.

Meanwhile, I signed up for a beginner’s creative writing course and researched more advanced courses for the future. Finally, I decided to take private grammar lessons after which I would begin writing my first draft.

As my example proves when planning ahead it is critical to make your plans SMART (Specific, Measurable, Achievable, Realistic, Timescaled).

The more specific your plans are, the more realistic your expectations will be in terms of what is required to achieve success. I also measured my progress every six months and updated my goal accordingly to keep it as SMART as possible.

When planning ahead, it’s vital to design a plan that is achievable, as this will impact your motivation. For example, I found engaging in creative writing for one hour a day totally achievable.

Unsurprisingly, creating realistic plans is key. This doesn’t mean thinking small but rather being honest about the level of hard work, commitment, and time involved and whether that is an investment you are willing to make.

When working out a timescale, look at others who have reached your goal and how long it took them. Your timescale should require you to stay productive and focused in order to reach your interim deadlines. At a core foundational level, this step had the most impact upon how powerful I felt by far.

What are the dreams you desire most that you could start working toward today?

My life looks a lot different these days. The scars from my bullying have finally healed, I’m happily divorced, I have two diplomas behind me, I’ve gotten my driving license, and I’m working through my forty before forty bucket list.

In life we all face challenges (that’s something that will never change), but what has changed for me is that I now face new challenges with confidence.

Since I started speaking up, getting crystal clear, and planning ahead, I know I will approach challenges with dignity by focusing on what’s within my control. I still have my off days, but when they arise I remind myself that no one is perfect and tomorrow is a fresh opportunity to speak up and work toward my goals.

The many years I spent asking “Why me?” taught me that we hugely underestimate how powerful we really are.

In practice shifting from “Why me?” to an empowered position takes consistent effort.

It’s like climbing a tall mountain; there are challenges along the way, but when you reach the peak the rewards are immediate and most of the hard work is behind you.

Having said that, the descent still requires skill. It’s important to choose your steps carefully. By approaching life’s challenges consciously, you can avoid most of the rough terrain and ensure a smoother journey.

Man on top of mountain image via Shutterstock

After weathering many storms Jenny Leigh began creating the life she longed for. Since redesigning her life she became passionate about helping others do the same and so created her personal development and psychology blog, accessiblepsychology.com. Through her blog, Jenny embarks with you on a journey of personal transformation—covering everything from stress management to achieving lasting change.