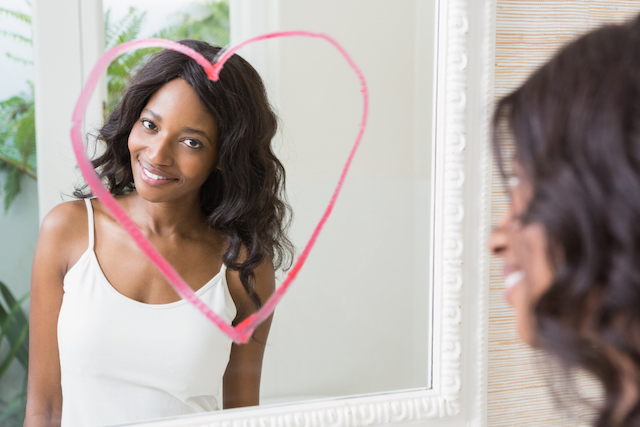 “The thing that is really hard, and really amazing, is giving up on being perfect and beginning the work of becoming yourself.”~Anna Quindlen

“I’m not actually happy,” I heard myself saying.

They were words I hadn’t yet admitted to myself, but I found myself sharing with a friend and mentor several years ago.

I was always working on bettering myself, and I devoted my life to living with purpose. The sentiment I shared with my mentor didn’t fit with the life I thought I had created, and it certainly didn’t fit with the notion of being on the leading edge of consciousness and culture, my organization’s motto.

He listened without judgment, and then he said this:

“This is your life and your spiritual path. It can be anything you want it to be, but it should be joyful.”

In that moment I felt liberated, and I realized that I had unconsciously bound myself to a life my mind had created.

I thought all of my hard work and dedication would bring me to some final place of happiness and didn’t realize that happiness is not a future goal to attain. It’s a relationship to ourselves.

I spent most of my life feeling misunderstood and lonely. In my mid-twenties I found myself at a party with a bunch of people of all ages who appeared joyful and treated each other like family. Over the next few years I became more involved with these people, many of them beautiful, loving people who I still consider friends.

This group was basically a cult, a small gathering of people committed to a spiritual principal.

We would get together and talk about spirituality, the nature of life, consciousness, human development, and culture.

I found myself excited to be so intellectually stimulated, but also intimidated. All of these people seemed so comfortable with themselves. They spoke with intention, and when it was my turn they all gave me their undivided attention.

I found myself in a situation where I was forced to be seen, and in turn I began to see myself.

It would be easy for me to blame the organization, and it’s true that there were things that were not conducive to my growth. Although I enjoyed many of the people, the collective feeling for me was one of judgment.

I felt like my words were being measured each time I spoke so teachers could see how I was growing. While I never felt an insufficiency of kindness, I did feel a lack of warmth and love.

The deeper truth was that I was judging myself. I felt inadequate. I felt like I couldn’t show who I really was because I was terrified of being perceived as less than.

I developed serious anxiety around speaking in groups. I started to shut down. I put pressure on myself to do as much as possible behind the scenes. I felt like there was always so much more I needed to learn and understand before I could add value to the conversation.

Instead of looking inward to discover who I was, I had an idea of who it was I should be. I spent my time striving to maintain that image, and it sucked me dry.

I suddenly woke up to the truth, years in, that I was unhappy. My zest for life was gone.

You might not have had the same cult-like experience, but I’m sure you can relate to the experience of trying to fit it and not feeling good enough.

It’s a burden that we often put on ourselves, one from which we have the power to liberate ourselves.

I have found that people who want to better themselves have a tendency to never be good enough for themselves, and it leads to deep dissatisfaction in life.

I could say that I lost myself during my time in that organization, but the truth is that I never actually knew who I really was. My time there was part of my journey to discovering myself. I walked away from that group and walked into a path of personal exploration.

I found that the things I felt in the organization, the lack of love and fear of judgment, were things I was struggling with within myself. I didn’t truly love who I was, and I was constantly self-judging. The feelings we have in relationship to others are often reflections of our relationship to ourselves.

I have found that those of us most interested in becoming better people are often far too hard on ourselves. We can look at our lives and see that we’ve put in a lot of effort, but we often experience little joy.

We have an idea of who we should be, and we’re constantly attempting to live up to that ideal but never seem to make it. When we attempt to do something to prove our worth, it’s never good enough for ourselves.

Being willing to see that we’re being hard on ourselves is the first step in transforming, but it’s really the big leap between seeing it and doing something about it that transforms our lives.

Soon after I realized I was unhappy I discovered breathwork, an active meditation practice that opened my heart and showed me what it meant to love myself. For the first time in a long time I felt joy again, and I discovered what it means to be truly happy.

I found that I needed to learn to let go, to surrender to my heart and soul instead of continuing to “power through” my life. In addition to my breathwork practice, I started doing more yin and restorative yoga. These tools helped me connect to my body and allowed me to see the truth I had been hiding from.

All of the pressure I put on myself to be this specific kind of person pushed me further away from loving who I already was.

The only way I could live the life I truly wanted was for me to release what I thought it meant to be happy.

Happiness doesn’t come from what we think our lives should be like. True happiness is a deep state of love for ourselves. It comes from awakening to the truth within you, that you are already everything you need to be right now.

When we’re chronically hard on ourselves we’re attempting to be someone other than who we really are. Within the body we find wisdom. We find signs like anxiety, depression, and illness that point to the truth that our systems are being burdened by our minds.

We’re driving ourselves like machines, and we’re suffering greatly because of it. The practice of slowing down and looking inward whenever we find ourselves consumed with who we think we should be gives us the opportunity to surrender.

We have to stop spending so much time trying to be better and see the beauty that is already there. We have to stop striving and start surrendering. We have to begin to acknowledge how incredible we are in this moment, right now, for being exactly as we are, as imperfect as that might be.

Remember, this is your life and your spiritual path. It can be anything you want it to be, but it should be joyful.

If You Want to Be Happy, Do This First

Stop Talking So You Can Start Feeling

12 Habits to Adopt to Make This Your Best Year Yet