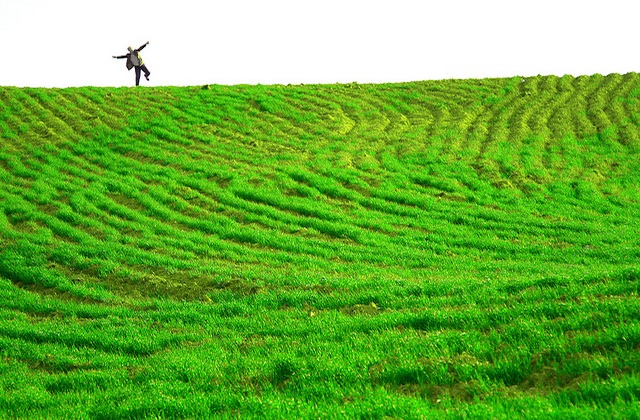 I like to tell the story of how I changed my mind about myself and what I was worthy of, and how that change almost immediately led me to my husband—or, rather, how it led him to me. On Craigslist.

But unlike a fairytale, we didn’t go straight from point A (boy meets girl on a sometimes-shady website) to point B (boy marries girl in the church she was baptized and grew up in, across the street from her childhood home) and happily ever after.

We sorta stalled at first. And it was all my fault.

See, even though we hit it off in a big way and immediately started emailing each other, like, a dozen times a day (seriously, I kept every single email and treasure them all), I wasn’t fully sold.

I didn’t think we had a chance romantically. Even though the poor guy did everything but jump through flaming hoops to get the point across that workdays full of emails was just slightly less than he hoped for, I held him at bay.

Finally after a month of this nonsense, the truth hit me like a bus (funny, since I was sitting on a bus at the time).

I heard a voice ask, “What is wrong with you? You have everything you’ve always said you wanted and you’re pushing it away!” After I looked around and made sure it wasn’t some weirdo randomly talking to me (you just never know on the bus), I gave the idea some thought.

Whoa. Yes, I totally was. I was pushing it all away with both hands.

This was another huge turning point in my life. Right there on the route 36 bus.

I explored this idea as I made my way home that night. For once there was a man in my life who was clearly interested in me, who very obviously wanted to take our relationship to a more serious romantic level. There was no struggle, no game playing, no confusion, no chase (at least, not for me).

And we had so much in common—our values, our beliefs on religion and spirituality, our interests. Sure, there were differences too, but just enough to keep things interesting, to keep us both growing and learning from each other. Enough to give us endless topics to ramble over through countless emails, for sure.

As long as I’m being honest, I was also totally addicted to talking with him. I looked forward to every single email and would get pouty when I didn’t hear from him right away. I had to check in and wish him a good night before leaving work, and had to check my inbox as soon as I got home to see if he wrote back.

I was clearly smitten. But here I was, holding the poor guy at arm’s length, even as he tried so hard to enter my heart.

So what was my deal, anyway?

It boiled down to this: I was miserable with my life the way it was, but it was all I knew. It was what I was comfortable with. I hated being alone, but “alone” was the only way I’d ever known my life.

I still needed to come to terms with the fact I was worth loving. No matter how awesome I told the world I was, I needed to believe that there was someone out there who would love my wacky self as-is, no strings attached, no holds barred, no weight loss needed.

Putting it bluntly: I had never known a man who didn’t require me to change in some way for them to consider me datable. This was a total challenge to my self-image.

I also needed a hefty shot of courage. After all, I’d been hurt in the past—too many times to count.

They hadn’t heard me snore in my sleep.

What if I started a relationship with this man and we broke up? How would I handle that, knowing that there was another person out there who knew all about me? This was a whole new world, and I had no idea how to navigate it.

Still, in the face of all this fear and hesitation, there was a quiet little voice in my heart that pointed out that the easiest thing in the world would be to just give in. To stop fighting it, which took more effort than letting things take their natural course. To believe that I was lovable, if only because this man saw me as such, and to trust that he would never hurt me.

And he never has.

I realize now that this way of thinking affects people in more ways than just the example I gave here.

So much of the time we long for something else, something new, something better, but when the opportunity presents itself, we either miss it completely or we come up with a million reasons why it’s not right for us.

We’re too busy, we’re not smart enough, we’re not lucky enough, or connected enough, we don’t have the money for it. On and on.

We let huge, potentially life-altering opportunities pass us by because at the end of the day we don’t believe we deserve them or that we could handle them if we gave them a shot. Even if we want them with all our heart.

It’s not that we’re lying to ourselves about what we want. It’s that we let fear dictate what we’re worth.

It takes work and a lot of self-awareness, but if we can identify these negative beliefs—all based around fear—we can work on becoming a little more fearless, every day.

Our job is to stop standing in our own way. To drop our limiting beliefs, stop dedicating time and energy to talking ourselves out of what we so richly deserve—fulfillment, love, abundance, joy, peace. To simply open our arms and our hearts and accept the possibility of something more, right there within our grasp.

That’s when things start moving and grooving. I promise.

Let’s stop holding our dreams at arm’s length. Or eventually they’re going to give up on us and continue dating another girl—which is what could have happened had I not texted my man that very night after my fateful bus ride.

In my excitement, I pulled out my phone and sent this super articulate message: You know what? I think I kinda like you.

I have never regretted sending that text. To this day I thank the voice in my heart for setting me straight, and for giving me the courage to take a chance.

Jennifer Bardall believes that life is best lived on purpose. Her book, Delicious, describes her battle with emotional binge eating and encourages others to put down the fork and pick up their life.

Thanking the Thankless: A Little Praise Can Go a Long Way