Taking the Shame and Fear Out of Mistakes
By Sue Adair 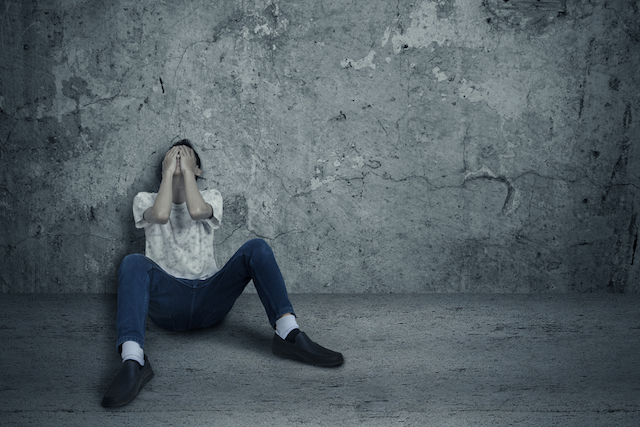 “The greatest mistake you can make in life is continually fearing that you’ll make one.” ~Elbert Hubbard

There have been times in my life when I knew I was stuck, but instead of dealing with it I chose to backpedal to the “safest bet” for me at the time, whether it was the steady paycheck from a soul-crushing job or an abusive relationship.

Then, one day, I suddenly realized that I had spent precious years just going through the motions.

One reason I had gotten so stuck was because I had been trained from early childhood to avoid making any sort of mistake at all.

In the first grade, I cut my ankle playing on a swing set. It quickly became so infected that I had to be hospitalized for many weeks.

I have blocked most of this from my memory, but my family tells me that I became very sick with osteomyelitis, which is an infection that reaches the bone. The doctors weren’t sure if my leg would need to be amputated or not.

My parents admit to me now that they had been very afraid that I was going to die.

Luckily, I recovered after an operation designed to help remove the infection instead of an amputation. Even so, they continued to operate from a place of fear and vigilantly protected me from the possibility of getting hurt.

My five-year-old self misinterpreted their wishes to keep me safe to mean that I was supposed to be perfect.

So, instead of moving forward, learning, and possibly harmlessly tripping up somewhere along the way, I learned to look for the sure thing, the safe harbor. The perfect choice became inaction.

We often won’t change until the situation becomes intolerable.

It’s like the urban legend of the frog in a pan of water under a Bunsen burner in a laboratory somewhere. The temperature of the water is gradually increased until the frog slowly boils to death, unconsciously, or at least until the frog suddenly becomes conscious enough to realize that it is too late to jump.

The frog legend illustrates that if something were immediately intolerable, we would effortlessly change.

But when the change happens so very gradually, we often aren’t aware that the situation has morphed into something completely intolerable.

I was never allowed to skip and fall when I was a child. Although my parents loved me, after my hospital stay they were filled with fear that something would harm me again.

If something went wrong, then one of them would have to rescue me. Worse than that, I was lectured so much about the dangers of failing at something that I often didn’t even try to begin. It was so much easier that way.

Since I never learned how to handle mistakes and failing, I kept doing the things I considered safe, easy, and predictable.

By protecting myself from falling, failing, or feeling uncomfortable, I became stuck in the place of not trying. I inadvertently had set up my life so there were no surprises and no chances of making a mistake.

By doing that, I was limiting my learning and my evolution. Life became predictable and stagnant. I had essentially become my own boiling frog. Only recently have I jumped.

I’ve learned that I need to make mistakes and face failure if I’m going to make any changes in my life. Here is what I have learned about failure and mistakes:

1. View mistakes as learning experiences and stepping-stones to get where you want to go.

We all make mistakes when we are learning. It’s the forward motion that’s important, no matter how small.

2. Stop comparing yourself to others.

“Comparison is the thief of joy.” ~Theodore Roosevelt

We often have unrealistic expectations of ourselves and compare ourselves to those with much greater expertise when we are just beginning. Even the experts made mistakes when they were learning.

“Mistakes are a part of being human. Appreciate your mistakes for what they are: precious life lessons that can only be learned the hard way. Unless it’s a fatal mistake, which, at least, others can learn from.” ~Al Franken

You will live. It’s important to learn to admit that we are human, we make mistakes, and we learn from them. Mistakes are about learning, not about shame.

4. It takes guts to get up wherever you may fall, brush yourself off, and to try again.

“The willingness to show up changes us. It makes us a little braver each time.” ~Brené Brown

If the direction you are going is true to your heart, you simply need to keep honing your skills.

5. If you are truly not learning and you keep making the same mistakes, it may be the truth coming out.

“The most confused you will get is when you try to convince your heart and spirit of something your mind knows is a lie.” ~Shannon L. Adler

Almost always, it doesn’t work because it isn’t beneficial for you. Move on in a completely different direction. At the time, we may consider what happened to be a failure, but it is almost always a blessing in disguise.

The only way we can become unstuck is through movement. And, when we move in any direction, we will invariably make mistakes and experience failure along the way. But is it really a “mistake” or a “failure” if we learn something and move forward?

In the first half of her life, Sue Adair successful raised her four amazing children while managing to keep her sanity working in the corporate world. The second half of her life is blue sky. Sue enjoys making things with her hands, especially spinning yarn, knitting and cooking. Visit her blog about simplifying and self-discovery at uncomplicatedlife.net.