The Difference Between Forgiving and Forgetting
By Sarah Fertig 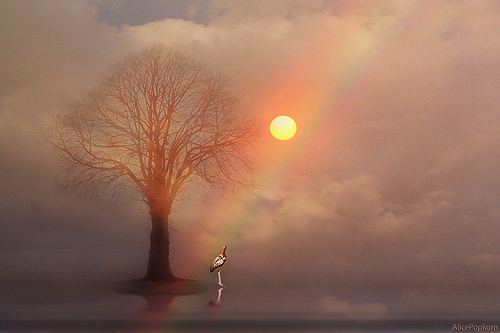 I will never forget the moment my marriage ended.

My husband and I had fought the night before, about many of the same things we’d been fighting about for the entirety of our four-month marriage.

He was dissatisfied with our sex life and my lack of respect for him. I was struggling with bipolar disorder, changing medications, going back to school, and trying to please a man who seemed to find fault with everything I did.

During that fight, he choked me twice to prevent me from screaming and running away. I learned quickly that if I didn’t want to die, I would have to go limp, submit to his power, and hope he would release me from my position, pinned face down in our bed.

When I woke up the next morning, my spirit was broken. I felt as if I had a terminal disease. I knew with great certainty that I would die at the hands of my husband, I just didn’t know how long it would take.

When my husband woke later, he wasn’t satisfied with my newly submissive attitude. Another fight ensued, but this time, he used a different tactic. He insulted me, cutting me to the core with a comparison to a person who had caused me a great deal of pain and anguish.

As it turns out, my spirit had not been fully broken. The tiny scraps that remained rallied together to propel me out the door of our apartment. I ran screaming down the street like a mad woman, banging on a stranger’s door and calling a friend to activate an escape plan.

I collected my dog, moved back in with my mother, and got a lawyer. Our divorce took seven months, almost twice as long as our marriage lasted.

And for the next year and a half after leaving him, I carried around the story of the violence and pain of our short time together like a security blanket.

Sometimes I would be angry with him.

I would wonder what was going through his head when he decided to cover my mouth and nose with one hand and immobilize my arms with his other free arm. I would cry when I compared the gentle, artistic soul I had fallen in love with to the invincible foe I faced at the end.

Sometimes I would blame myself.

If only I hadn’t sought solace and companionship at a local church. If only I had been able to listen unquestioningly to his demands, instead of arguing for silly things like access to psychological care and food and sleep.

If only I had been perfect, he wouldn’t have choked me.

After a year and a half of this mental and emotional racket running through my head and heart on a daily basis, I finally started to see rays of light shining in through the cracks.

Reading Tiny Buddha had a lot to do with it, but the real breakthrough came when I took a road trip to a city I had never been to before, a city my ex-husband had visited before we were married.

Walking around in this city, I looked for the things he told me about. There was the bookstore, where he bought me a card. There was the burrito restaurant. There were the murals he admired.

Suddenly I was able to see my ex-husband in a much more sympathetic light.

He did not wake up one morning and decide that he was going to terrorize me. He did not set a goal of choking the woman he married. He was not a sociopath who enjoyed inflicting pain upon me.

He simply acted on his experiences and emotions, and chose to do what seemed logical at the time. Which is exactly what I had done, what we all do.

Looking back on it, I could see what a mess we were. Our insecurities and flaws became more exaggerated when we were together. We truly brought out the worst in each other.

In that moment, I decided to forgive my ex-husband. I bought a tiny carved elephant, one of his favorite animals, from the bookstore he had described to me, and took it down to a riverfront park. There, by the water, I said aloud everything I had just realized.

I apologized for not knowing myself better, and thereby not realizing how wrong we were for each other.

I apologized for not seeing my ex-husband for who he was, instead super-imposing my own fantasy onto him.

I thanked him for all of the good times—the road trips, the conversations, the paintings he gave to me, the way he encouraged my singing and guitar playing.

I wished for him to find health and wholeness.

I placed the little elephant on a ledge overlooking the water, and walked away.  The lightness of heart that I felt—the relief, the gratitude—all settled over me like the first snow on a pine branch.

And I realized as I drove away that forgiving and forgetting are very different things.

I must not forget the lessons I learned from my marriage.

I must not forget what is most important to me—freedom of movement, freedom to pursue friendships, freedom from fear and control. And I must not forget the warning signs I saw in my ex-husband, which I ignored, that almost cost me my life.

Although I forgave my ex-husband, I will not forget the harm we did to each other. And this is a good thing.  If I forgot, I might walk into another similar situation. In remembering, I am able to evaluate new relationships and make sure I’m not going to re-make the same movie with different actors.

For too long, I resisted forgiving because I had confused “forgiveness” with “approval.”  Nothing could be further from the truth.

I don’t condone my ex-husband’s actions. But he is far from the only person in the world who has done something hurtful without intending to.

We have all hurt people in our lives, and we have all benefited from someone’s forgiveness.

How bleak the world would be if everyone held onto their pain the way I did.

How bright the world can be when we release the burden of anger and resentment, and instead forgive.

And how beautiful the world can be when we learn from our pain instead of wallowing in it.