The Kindest Thing You Can Do for Someone Else
By Guest 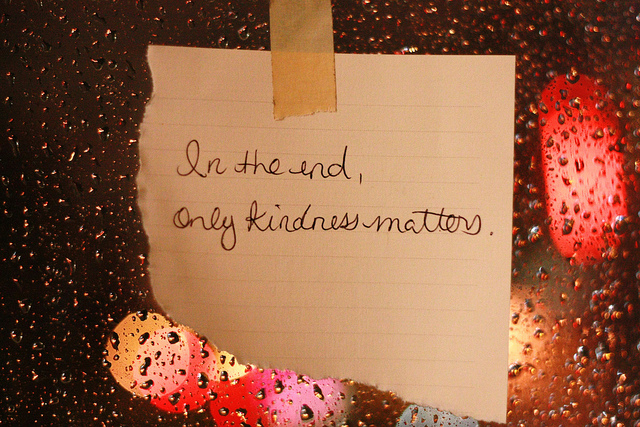 “The kindest thing you can do for someone else is listen without forming an opinion.” ~Lori Deschene

I was standing on Tremont St. looking for a cab, feeling euphoric after a fun night on the town. I had a couple glasses of wine—okay, several glasses of wine—so I was a little buzzed on top of that.

This guy walked by me with a dog, both looking scraggly and unfortunate. He asked me if I could spare some change.

I immediately said, “Sorry I can’t.” He’d probably just spend it on booze, I figured. That’s what they all do, right? Then I started thinking about the dog. He didn’t have a choice in all this. Maybe he’d benefit if I sucked it up and pulled out a few bucks.

I realized I was standing right near a bus line that goes down my street and decided to re-purpose my cab money. So I pulled the guy over, saying, “Wait. That’s a lie. I know you probably really need it.”

I looked in my wallet and took out a five, and he actually said, “Wow!” with tears welling up in his eyes. Damn. He had to go and show his humanity. Suddenly I felt horrible. I wasn’t being kind and generous. I was being judgmental and condescending while pretending to be a hero.

I decided to knock it off. I asked him about his life. Where did he used to live? How did he end up in Boston? Was he trying to get off the streets?

He told me he’s a musician from New York; that they’d been living in a van while he looked for construction work. I asked how he feeds his dog, and he said he manages just fine. Between every two sentences, he said, “God bless you,” still thinking about that five I gave him.

We talked for a good fifteen minutes—he in his threadbare T-shirt and jeans, and me in a dress and strappy sandals. Several men did a double take as they walked by, like something was wrong with the picture. I wondered if my initial reaction had been any better.

I saw the bus approaching down the street. In those final seconds I thought of the most important questions I could ask him.

“Does your mother know where you are? Want me to give her a call?”

“Thank you,” he said, grabbing onto my hand. “She’s not around anymore. But God bless you. God bless you.” One more time. And then he and the dog were gone.

At first I didn’t want to know who he was. I didn’t want to empathize with where he’d been or imagine he had good reasons for ending up on the streets. I wanted him to suck it up, because life’s hard for all of us. To stop feeling bad for himself, get a job, and just plain pull it together.

And then something shifted. Maybe it was the wine or maybe just plain human decency that told me to care more and judge less. So I did. And I’d like to think I made a difference.