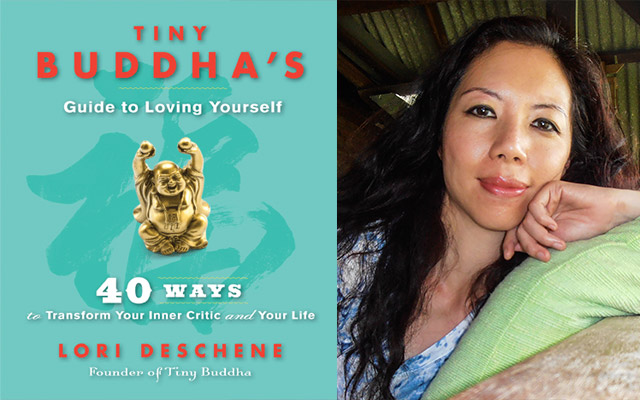 It’s day four in the pre-order promotion for Tiny Buddha’s Guide to Loving Yourself, a book about taming your inner critic that features 40 stories from Tiny Buddha contributors.

Over the next month, you’ll have a chance to meet some of them through daily interviews here on the blog.

Her contribution for the book focuses on feeling our feelings instead of running away from them (and ourselves).

A little more about Amyra…

1. Tell us a little about yourself and your self-love journey.

Loving myself was a perplexing concept, since I had spent most of my life believing that I was unworthy of anyone loving me. I saw myself as “damaged goods” and spent many years abusing myself through self-destructive thoughts and behaviors.

When I first came across the idea of self-love, I really struggled to understand where this love was to come from. My entire journey of healing and spiritual growth has been about finding this source of love within myself.

Through trials and tribulations, as well as unexpected miracles, I met different aspects of myself and discovered, bit by bit, my worthiness.

Years ago, I reached a point where I wasn’t driven so intensely to sabotage myself anymore. Today, I’m still finding new aspects of myself in my ongoing journey of coming home to wholeness.

2. Have you ever felt there’s “something wrong with you”? If so, why, and what’s helped you change your perception?

I remember as a child being very creative and expressive. I saw colors, energies, felt connected to nature, had an expanded understanding of life. At some point, I received the message that it was not okay to be myself, and I started to judge all that I was to be bad.

One of the processes that really helped me in my recovery from depression and addictions is reconnecting to those qualities. In reclaiming them as part of my innate self, I learned to stop rejecting myself.

I realized that in denying my natural traits, I had become someone I was not; that misalignment with my natural self had translated into feeling there was something wrong with me.

3. Have you ever thought something was a flaw only to realize that other people actually appreciate that about you? What was the “flaw”?

When I was a teenager suffering from depression, I felt trapped in a world I couldn’t escape from. So I escaped into my mind, where I pretty much lived for the rest of my childhood. I developed an introspective, deep-thinking ability as I sought alternative ways to perceive the world.

I had a knowing that somehow we are limiting ourselves as people and that what we see isn’t the full picture. In other words, there must be more to life than what we’re putting up with.

Mentally, I became very creative in exploring the philosophy of life, challenging what most people have accepted as the truth. It became my default throughout most of my adult life, as well.

Since it was borne out of the bleakness of my depression, I associated this tendency with being dark, depressing, and too intense. I saw it as a flaw that needed to be eradicated.

It wasn’t until I started being a writer and a therapist that I realized how much people appreciate that about me. It gave me the ability to write good material and create many innovative processes that have allowed me to help many people.

4. What was your biggest mistake (that you’re willing to share), and what helped you forgive yourself?

In earlier years, I was so afraid of people getting close to me that I hurt a lot of people who cared about me. I remember a few of my colleagues organized a small party for me after I had resigned and was about to relocate to another country.

I was so entrenched in my feelings of inadequacy that I couldn’t bring myself to go out and be around people. So I didn’t show up; I didn’t even tell them that I wasn’t coming.

I felt so guilty that I couldn’t bear to talk to them again. Several years later, I was told that my friends were very hurt and disappointed. They’d even bought a cake for me.

For a long time after that, I couldn’t get the image of my friends sitting around a cake waiting for me out of my mind. In time, I allowed myself to feel the full remorse of my actions, and heal myself from the guilt of this and many other events.

I realized that in those days, I simply did not have the resources to act otherwise because I was crippled by pain. Learning to accept this fact helped me to forgive myself.

5. Complete this sentence: When other people don’t like me, I…

…no longer get angry. I used to feel so much rage in me whenever I perceived people to judge me and I would act out harshly toward them. But it only intensified my self-hatred and I ended up beating myself up over and over.

I’ve learned to be calmer about what people think about me. I try to see everything from a spiritual perspective these days, which helps me to recognize the spirit in everyone, no matter how we’re operating in the physical world.

Whenever I find myself reacting internally to others, I know it points to somewhere in me that needs more healing. So I use that as a “gateway” for more healing and transformation.

6. What are some areas in your life where you’ve compared yourself to other people, and what’s helped you let go of these comparisons?

I used to envy others who appeared to be relaxed, light-hearted, and free in expressing themselves in social situations, whereas I would battle constantly with self-berating thoughts, even as I put on a performance outwardly.

The conflict between the anguish I felt inside and how I wanted to be made me perceive other people superficially.

7. What’s one thing you would tell your younger self about looking to other people to complete you?

Looking to other people to complete you is dangerous. If you rely on others to validate you and make you feel good about yourself, the wounds in you are still there.

They are begging to be healed and your soul will bring you opportunities to return to more wholeness. So if you’ve been covering up your inadequacy with external validations, you’ll come to a point where you’re stripped of the false, quick-fix cover-ups.

It could come in the form of people abandoning, deceiving, or betraying you, which are ultimately a loving gift from your soul, but you can avoid ending up in that soul-directed “last resort” by addressing and healing your deep inadequacy before such painful events become necessary.

8. Have you ever felt afraid to show people your “real” self? Why—and what’s helped you move beyond that?

In my mind, I was flawed, and didn’t fit in. It was a lonely place to be in. I wanted to fit in, yet didn’t want to fit in. It made me awkward, being pulled by two opposing forces.

I didn’t know how to be in this world. I didn’t even know who the “real me” was.  Nothing felt authentic about me, so I covered up my insecurity with an image of perfection, decked up with materialism.

For some time, I tried to convince myself that I was happy and secure living this way. But there was a strong drive in me to break out of this false self I had constructed.

Within a relatively short period of time, I managed to deconstruct this life, and I began a journey of discovering who I really was. But what was underneath the façade was all the pain I’d been trying to cover up.

So my “real self” then was really just a person in a lot of pain. It was challenging for me to show my vulnerability: that I am far from perfect, that I haven’t figured it all out yet, that I am still wounded and capable of behaving in stupid ways.

I am still learning, and ironically, it is through this process that I’ve been able to connect with my true beauty and worth.

9. What are the top three things you personally need to do to take good of yourself, mentally and emotionally?

10. What’s something you do regularly that makes you feel proud of the difference you’re making in the world?

I am constantly looking for new, creative ways to help people transform their experience in life and grow spiritually.

My passion to help liberate people from their suffering has come out of my own struggles. Thus, it’s usually easy for me to respond with compassion and empathy whenever I see people in need of some guidance. Being in a position to make a difference in someone else’s life is both humbling and moving for me.

*Note: I edited this post to remove info about the pre-order promotion, which ended on October 8, 2013. You can learn more about Tiny Buddha’s Guide to Loving Yourself here.