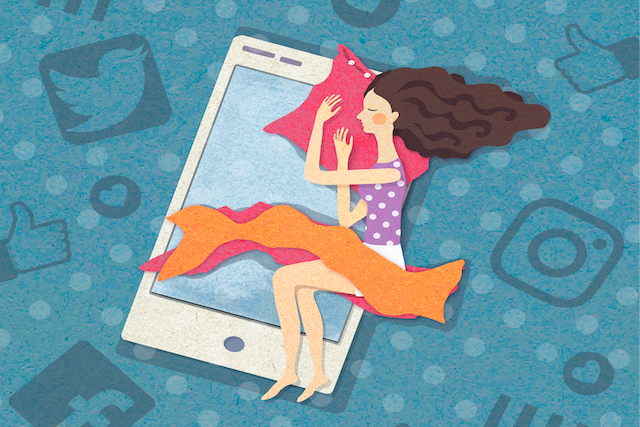 “People are lonely because they build walls instead of bridges.” ~Joseph F Newton

Can you imagine your life without a cell phone?

For most of us, we use our phones every day, whether it’s for talking with others, looking up information, or entertaining ourselves during those lulls in the day.

A short while back, my phone contract expired and I was left without a cell phone. It felt strange at first, since my phone was something that was beside me almost every second of the day.

But a thought came up: What would my life be like without relying on a cell phone all the time?

I decided to run an experiment to see how it impacted me. And what I learned surprised me.

When my eyes weren’t glued to my phone, I was able to look up and notice different things around me. I became more aware of how people used their phones, especially when there weren’t any other electronic devices around to engage them.

One day, I went to a restaurant for a meal and noticed a family of four sitting beside me. Two adults and two preteen children were seated in a cozy corner, gazing at their menus.

It looked like they were out having an enjoyable meal as a family. Wasn’t it the perfect time for them to reconnect with one another and share what was happening in their lives?

But as soon as the orders were given and menus were taken, the dad whipped out his cell phone and began browsing away. The mom followed suit and pulled out her phone as well.

The little chatter that happened over the table died out, and the two children each pulled out their phones to play with the apps on their phones.

A while later, the meals arrived.

Everyone put down their phones to admire their dishes. A few comments were made before digging in. A sip here, a bite there, and soon they went back to staring at their phones again during the meal.

As the meal progressed the table was silent, save the occasional clink of utensils against plates.

Ironic, isn’t it? A device that was made to ease communications can end up being a hindrance to talking with others in real life.

After I left the restaurant, I thought about what happened and couldn’t help but cringe. Not for them, but for its reminder of how I used my phone in the past.

I would use my phone on the subway, at work, during meals, and almost every other spot in between.

My phone usage was especially obvious at social gatherings. When the conversation died down and the silence became uncomfortable, it was easy to flip through my phone as a distraction. It was my way of trying to say: “It’s not that I can’t stand the silence—it’s just that I need to check my phone right now.”

Which, of course, wasn’t true. But it took not having my phone on hand to realize the way I had been using my phone as a crutch. It protected me from uncomfortable situations, from looking bored, and from being unproductive.

When I didn’t rely on my phone, I shared conversations more easily, became more conscious of my surroundings, and found more meaning in my actions. There are four big realizations I’ve come to about phones—and by extension, a lot of the technology that we rely on today.

1. You don’t need to be available every second of the day.

The vast majority of us are in positions that allow us to turn off our phones from time to time. Unless you’re in a job that requires being on call, you can step away and give yourself time off from electronic devices.

I used to worry that if I didn’t reply to someone’s instant message or email right away, the person would become impatient or I would miss out on an opportunity. I felt myself getting stressed when I forced myself to constantly check for updates.

But now I know that if I wait to get back to someone, it isn’t the end of the world. It can actually help me develop clarity in how to respond and also gives me peace of mind.

2. Phones are made for communicating with people, not avoiding them.

Have you ever tried speaking with someone, only for the person to mumble a response while staring at a phone or laptop? Or, maybe you found yourself so preoccupied with your phone that you didn’t notice anyone around you?

It’s interesting how the urge to fiddle with our phones strikes us when we’re put in a strange situation. Like being in a room with new people. Or running into someone we haven’t seen for a while.

If you find an urge to use your phone during these situations, stop for a second. Ask yourself, why do you feel more comfortable using your phone at certain moments? Does it have to do with something urgent popping up on your phone, or an effort to avoid feelings of discomfort?

Not all discomfort is bad. Discomfort can be a sign of growth. It’s an opportunity for you to connect with others and learn something new.

3. A phone is not a substitute for companionship.

I have a friend who enjoys spending his time messaging acquaintances and friends that he hasn’t seen for at least several months. When I asked why he didn’t see them even though they lived nearby, he said, “Why should I? I already message them all the time.”

I admit, I laughed at the response. I believe (and I think you’ll agree) that nothing beats meeting someone in person. Even if we spend months, or years, communicating with someone online or through a phone, we don’t feel like we truly know the person until we’ve met.

I like to keep a mindful balance between the time I’m using an electronic device and the time that I spend with people. If you’ve been staring at something for most of the day, it’s probably time to put everything down and take a break.

4. Phones are useful, but use them wisely.

If you’re thinking about what to do with your phone right now, don’t worry. There’s no need to chuck it in the garbage!

Phones are great for many things, I can attest to that. They’ve helped me reschedule meetings, get access to information instantly, and choose a wonderful restaurant from time to time.

Keep in mind, though: phones, laptops, tablets, and other electronics are made to help your life, not consume it. If we set boundaries between technology and our lives, we can use these gadgets to get even more out of our experiences in everyday activities.

So whatever you choose to do, remember that phones cannot replace the joy of laughing with a loved one, of discovering new places, or the sense of content you feel after making a positive contribution to the world. But if used properly, they can help you get one step closer to achieving those things.

Melissa Chu helps thousands of readers live better and create great work at JumpstartYourDreamLife.com. Check out her guide on transforming your goals into reality here: How To Get Anything You Want.

Attached to Your Smartphone? How to Break the Addiction