We Are All Imperfect: How to Own it & Keep Growing
By Fiona Robyn 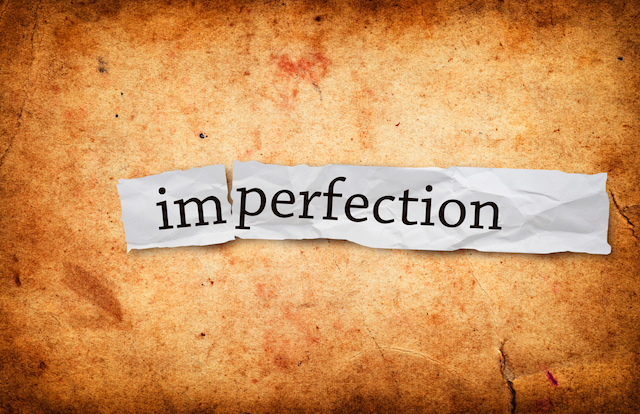 “Be what you are. This is the first step toward becoming better than you are.” ~Julius Charles Hare

A few weeks ago, I made a mistake.

I wrote a newsletter about my relationship with money, explaining that I used to get worried about money, but I feel differently now. I wrote that I’d realized that doing what I love is the most important thing.

As long as I am doing what I loved, I don’t have to feel anxious. I trust that the money will appear, without me having to chase it.

After I sent the newsletter out to the 500 people on my subscription list, I had a funny feeling in my stomach.

The next day, I asked a friend what she’d thought about what I’d written.

She said, “It sounds like you’re still worried about money.”

She was right. That explained the funny feeling in my stomach.

The things I said weren’t quite true. I wanted them to be true because I wanted to be the kind of person who doesn’t worry about material things.

It was true that I’ve made some progress in my relationship with money. But I’m certainly not as serene and trusting as I portrayed myself in my newsletter. I still have mornings when I feel panicky about finances.

I felt uneasy about what I’d written for a few days. And then I wrote another newsletter about money. In this one, I confessed that I’d told a fib in my last newsletter, and that I wasn’t as perfect as I was making out.

Feeling a bit nervous, I sent it out to the same 500 people.

Julius Charles Hare suggests that we should start by being ourselves—by being what we are.

Sending the second newsletter was being honest about who I really was, warts and all. Once I sent it, I felt much better.

It was also a relief that other people felt better, too.

Quite a few people who read the newsletter wrote to me and said they admired what I wrote. It had made them feel better about their own worries about money, or about their own tendency to pretend they were someone they weren’t. They appreciated my honesty.

It can feel like a real risk to be who we are.

If we share the less wonderful parts of our personality with people, there is always a fear that they will reject us, that they’ll stop wanting to spend time with us, or that they’ll judge us.

Sometimes it can even feel risky to be honest about our good qualities. Instead of being proud of being a good driver, or a good cook, we pretend instead that we’re terrible. We might feel shy about ‘boasting,’ or we might think that people will disagree with us and put us down.

Really being who we are is the only place to start. When we can be honest with ourselves, it becomes much more possible to change for the better. We know where we’re starting from, and we don’t have to use up any energy hiding the truth from ourselves.

These six suggestions may help you become more honest about who you really are, as a first step toward becoming a better person.

1. Begin by acknowledging the little fibs you tell yourself and other people about yourself.

You might notice yourself boasting about something that isn’t quite true, or you might lie about your good qualities, protesting that you’re no good at baking even though everybody raves about your carrot cakes.

You don’t have to confess everything to the whole world. Begin gently, by telling a good friend that you’re more worried about your exams than you’ve been admitting. Once you’ve told one person, it’s easier to stay honest with yourself.

3. Realize that it’s braver to own up and admit when you’ve got something wrong than to pretend otherwise.

It will also make you feel much better, and although other people might feel annoyed or disappointed in the short term, they will be more likely to trust you in the long term. We like it when people are honest with us, even if we’d prefer things to be different.

4. Remember that trying to hide something doesn’t mean other people don’t see it.

My friend could read what was behind my first newsletter, even if I thought it sounded pretty convincing. Why exhaust yourself trying to be a seen a certain way when it’s often fruitless?

We all make mistakes all the time, and get things wrong. We’re all human. Be kind to yourself. If you find this difficult, imagine that you are your own best friend. What would you say to your best friend if they were in your situation?

You could spend a few minutes every evening reviewing how well you’ve managed to be yourself during the day, or you could explore this question in your journal.

Giving ourselves permission to be what we are is a huge relief. Try it and see!

Fiona Robyn is also on a mission to help other people to connect with the world through writing. Visit her free community where all are welcome.

If You Want to Be Happy, Stop Pretending