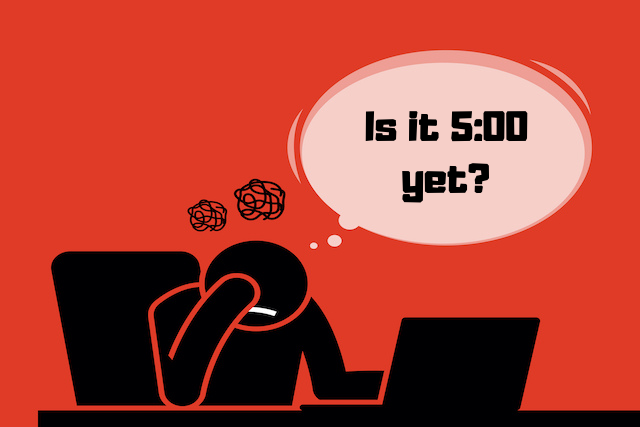 “You don’t need anyone’s affection or approval in order to be good enough. When someone rejects or abandons or judges you, it isn’t actually about you. It’s about them and their own insecurities, limitations, and needs, and you don’t have to internalize that. Your worth isn’t contingent upon other people’s acceptance of you—it’s something inherent.” ~Danielle Koepke

Imagine you’re in your early thirties, in a job you enjoy at a company you love, and you just got promoted (without lobbying for it), so you’re living a great life.

All of a sudden, you’re bombarded with negative feedback from your manager. Despite previously being commended on how you demonstrate accountability, maximize relationships, and a whole host of other “leadership dimensions” there is now not one area you’re strong in, and everything you do is regarded as not good enough. You’re devastated, stunned, confused, hurt, embarrassed, lost, scared, and basically frozen with fear.

This was me back in 2007. At the time I had been with this large corporation for nine years in a variety of roles, steadily progressing up the corporate ladder. I started with them immediately out of college; I had essentially grown up there.

I remember feeling so happy and proud when the job offer came; my excitement and enthusiasm for going to work each day was a little freakish. Each day I’d get up early and be bubbling with energy because I couldn’t wait to get there.

My family was impressed with my landing a job at that corporation; it was the first thing they’d tell people who asked about me. I always identified myself first and foremost as being a team member at that company. It was who I was at my core.

I initially started in a role more focused on data, analysis, and inventory planning, and maintained this focus for seven years. This aligned well with my analytical and logical mind. It wasn’t until I tried my hand at project management, teaching others to lead projects as well, that I started to grow more comfortable focusing on the people aspect.

I remember being so scared when I first decided to diversify my skillset and make this shift, but proud that I’d had the courage to take the chance.

Even though initially the nerves were almost overwhelming in the coaching role, I was really enjoying working with a broad set of people from analysts up to directors. I was someone they turned to for help, guidance, and advice. I started to feel more and more comfortable and was eventually told there was a promotion coming my way.

Shortly after the promotion things started to suddenly go downhill. I was constantly being questioned about what I was doing to change and how I was addressing my opportunities. Nothing I did was right or good. It was such a sudden shift that I ended up very confused, scared, and doubtful.

To hear that I was no longer good enough for this company I’d grown up in, loved, and identified with so deeply was devastating. I started to think I wasn’t good enough in any aspect of my life and became depressed. I was constantly anxious and scared to do anything in case I made another mistake that would be pointed out or somehow jeopardize my job. I was literally scared that my whole world would be taken away.

I leveraged those around me to try to understand and get through this. My work friends would try to convince me that I wasn’t bad at everything, that I was doing a good job. They could see the impact this criticism and negative feedback was having on me. I worked with my human resources partner to develop a plan for how to address all these sudden performance issues.

Things were so bad that I realized I needed professional help and started seeing a therapist. I couldn’t concentrate, I couldn’t sleep, I was even starting to have panic attacks.

It was then that I started taking anti-anxiety medication and something to help me sleep. While I started to feel numb to the emotional stress, I also started to gain weight at an alarming rate. I gained thirty-five pounds in a matter of maybe two months. Now I wasn’t just worthless because I couldn’t do my job but my health was really starting to suffer.

This was one of the lowest points in my life. The company I’d grown up in, loved, and tied my identity to was now the biggest source of pain. Sure, over the years I’d imagined a different life, one where I wasn’t tied to a desk, staring at gray cubicle walls and trying to fit into the company mold, but I always settled back in my role because it was familiar, comfortable, and who was I if I wasn’t someone who worked there?

I’d like to say that this was a moment where I had some sort of epiphany, found myself, and completely turned things around, but it wasn’t quite like that. I survived, bounced back, and learned a lot, but it was a slow process. Some of the things I learned didn’t actually come until years later.

What follows are some of the lessons learned from this time in my life.

You determine your own worth. Don’t let others do this for you.

When I was feeling so beaten down and horrible during this time, I allowed myself to believe what someone else was telling me about my worth, abilities, and value. I didn’t have enough self-confidence to know that just because one person thought I wasn’t good enough that didn’t mean that I was.

I was still the same person as I was before getting promoted. When reflecting on this, I realized that I was putting a lot of stock in people liking me and I sought external validation to feel I was a good person.

I now know that it’s okay if people don’t like you. People are different, and everyone doesn’t like the same thing, so why would you expect everyone to like you? While I still sometimes struggle with wanting people to like me, I’ve learned to trust my own abilities and I know what I’m good at.

You don’t need to be someone you’re not in order to fit in.

My company had the attitude that everyone had to display certain characteristics and conform to their mold or you would be coached on all your “opportunities.” I experienced this myself and I saw it happen to many others as well.

Twice a year we went through reviews and rated ourselves on leadership dimensions. I was consistently told I was too passive and quiet, that I needed to be more assertive. I even went to assertiveness classes!

I’m an INFJ, I am quiet, and I will always be quiet. I’ve since found a career that allows me to be myself and help people in a way that makes me feel good. This doesn’t mean I’m getting external validation about my worth, just that I have the confidence to know I’m enough.

Don’t be afraid of the unknown or be too scared to move out of your comfort zone.

My identity at this time was so tied to the company that there was too much fear to leave; I didn’t know who I was, so leaving this identity felt like leaving me. Even though I was miserable I was not uncomfortable enough to make a change.

It wasn’t until years later that I felt good enough to leave this company. I was actively pursuing a consulting career when I got laid off during their largest lay off in history. I knew it was coming, had even planted the seed with my manager, so I wasn’t upset and didn’t have the feelings some do when in this situation.

It’s not easy to let go of a role that feels like part of your identity, but it’s far harder to hold on to something that leaves you feeling miserable or unfulfilled.

You are not your job.

Even though, if you’re like most people, you spend much of your time at work it doesn’t mean that you are your job. Your job is just one piece of your life. There can be so many other facets that have nothing to do with work like family, friends, hobbies, volunteering, etc. Cultivate those things so that when you are having a tough time at work you can get away from that and focus on things that give you joy.

You have to know yourself.

This was huge for me. Even though I was miserable, I didn’t know myself well enough to feel good about my abilities or to know what else to pursue. I couldn’t list the things I was good at or liked. I couldn’t even think for myself and would second-guess my decisions.

Throughout my life I never really had a plan, just followed the standard path that everyone followed—graduate high school, graduate college, get a good job. I never stopped to spend time learning who I was; I was whoever I thought people expected me to be.

Eventually I spent some time learning about myself through journaling, exploring personal development topics through podcasts, books, blogs, etc., taking online courses, and working with a life coach. I also leveraged a personality test and asked those around me for feedback.

Sometimes people are going through things you have no idea about.

Although to this day I still don’t know why my manager seemed to turn on me, I do have some theories. I believe that deep down, he wasn’t a mean or bad person; he was someone who was scared and unsure and chose to use his authority to exhibit power over me to make himself feel or look better. Eventually he separated from the company, and I don’t believe it was by choice. I have empathy for him because I believe he didn’t know how to handle his feelings, so he did what he felt was the safe thing for him.

While it took a great deal of reflecting and contemplation to understand the lessons that were presented, going through this very difficult time in my life made me a stronger and more resilient person. When you realize that you’re stronger than you thought it gives you power to handle even greater challenges.

Leah is a Life Purpose Coach. She empowers courageous and determined professionals who feel lost, burned out, and unfulfilled in their life to rediscover themselves and create the freedom to live their life purpose. Sign up for her free personal vision workbook and check out her coaching programs at leahmasonick.com.

Losing Your Job Doesn’t Have to Mean Losing Yourself