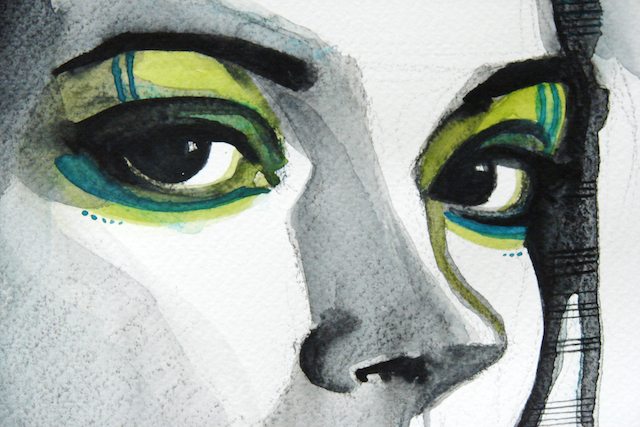 “It is in the character of very few men to honor without envy a friend who has prospered.” ~Aeschylus

Your best friend enthusiastically shares some big news. You say all the right things and display the right emotions. But inside you’re burning up. Instead for feeling truly happy, you’re filled with uncontrollable envy.

When the Green-Eyed Monster Took Me Over

A few years back my closest friend told me she was pregnant. I responded with appropriate excitement, said the right words, and showed the right emotions. But with each smile, word, and act of joy, I died a little bit inside.

The first chance I got to be alone, I wept bitterly. It seemed so unfair that while I’d been trying unsuccessfully for over four years, she got pregnant within a month of getting off the pill. She wasn’t even sure if she wanted a baby yet!

Bad as all this misery was, I felt worse that I had these feelings in the first place. She’s always been a good friend to me, and here I was, seemingly incapable of being happy for her.

I tried applying conventional wisdom—replace my envy with gratitude, look at all the good things I had, and stop worrying about what I didn’t. But I found out the hard way that’s not how it works in real life.

I was worried. I feared that if I didn’t get over this feeling I might lose a very good friend. Worse, I might lose myself and become a bitter, resentful person.

It took quite some effort to finally come of the situation without ruining my friendship or letting it poison my soul. Here are some of the lessons I learned along the way:

1. Envy is a strong involuntary feeling that you cannot get rid of by just wishing or willing it away.

Nobody gets up in the morning thinking, “Today I’m going to feel unhappy for my friend’s happiness.” (At least, I hope not!) And yet, sometimes when we want something bad and find that our friend got it instead, it fills us up with envy. It’s not pleasant. It’s not welcome. But it’s there.

Just because you don’t like it, you can’t wish or will it away.

Research has found that thought suppression is often ineffective, and can actually increase the frequency of the thought being suppressed.

In an experiment, researchers found that subjects asked not to think about a white bear paradoxically couldn’t stop thinking about it. Other studies explored this paradox further, and support the finding that trying to suppress a thought only makes it more ingrained.

So first thing, stop trying to get rid of these thoughts. Accept them for what they are—normal feelings that arise in a normal human being.

2. Nail down the source of your envy to let the person who made you envious off the hook.

At first glance it may seem like the person who made you envious is the source of your envy. However, if you dig a little deeper, you may realize that the reason you feel envious has little to do with the person who brought out the feelings.

In my case, the real source of my feelings was that I desperately wanted a baby. Sure, the fact that my friend got what I didn’t triggered the feeling of envy, but the source was my want and my fear that my want won’t be met.

3. Let this knowledge lead you toward personal growth instead of resentment and bitterness.

At this point you have a choice. You know that there is something you want but can’t have. Will you become resentful of those who can, or will you make peace with the way things are?

I knew there was nothing that my friend could do about my inability to get pregnant. I also realized how illogical it was to expect that nobody in this world have a baby just because I couldn’t.

It didn’t mean that I stopped feeling envious instantly; I still desperately wanted to have what my friend had. But separating the source of my feeling from the person made it possible to feel happy for her, in spite of my continued feelings of envy.

Ever so slowly, I started to feel excited about her pregnancy and the opportunity to experience the miracle of a baby through her.

4. Focus your attention on addressing the source of your envy, instead of trying to eliminate the feeling.

Your envy is probably here to stay—for a while anyway. Instead of fighting it, address the source of it.

I knew deep down that four years was a long time to wait to have a baby. But I hated to face it head on. When I realized how easily I fell prey to the green-eyed monster, I knew it was time to take my head out of the sand and deal with the issue.

I started infertility treatment. My friend was right there by my side as my biggest source of support through this emotionally exhausting roller coaster. In turn, I was able to share with her the excitement of her pregnancy. In fact, it was a huge motivation to keep going on rough days when all I wanted to do was give up and curl into a ball.

I finally got lucky. Five months after she delivered her son, my daughter was born. Our friendship had survived the difficult test.

The Green-Eyed Monster Is Never Too Far Away

I could probably stop right there, and that would be a fine place to wind this story up. But I promised to keep this real, so here’s the rest of it.

The year that I had my daughter, three of my other close friends had their first kids too, in addition to this one. It was as if the stork had declared a “friends and family” promotional event.

In the subsequent years, however, it was clear that my little tryst with the stork was over. All my friends had their second kids, but my attempts at growing the family further just did not pan out.

As my friends got pregnant one after the other and had babies, I looked at their growing bellies and subsequently, their tiny little bundles of joy with longing.

Even though it’s been years since we’ve decided to move on, I still wish at times that my daughter had a sibling to share her life with. And at odd times, I still feel pangs of envy about my friends’ perfect families.

Then I remind myself: while you really can’t stop feeling a sense of envy every now and then, you can choose how you deal with it.

A Mindful Way to Find Relief from the Pain of Envy

8 Tips to Move Beyond Envy and Start Thriving