Why I Stopped Apologizing for Being Me
By Jacky Exton 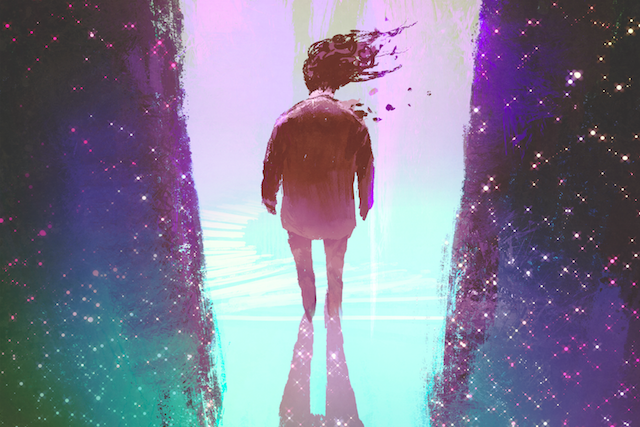 “Never apologize for showing your feelings. Never regret being who you truly are.” ~Unknown

Ever felt like a square peg in a round hole? A fish out of water? A knife in a fork drawer?

That was me growing up.

On an emotional scale of one to ten (where one is cold and ten is super-sensitive), I hovered between seven and nine on any given day. The rest of my family resided around four.

As a result, I spent a large part of my youth feeling disconnected. An outsider. Alone.

As the youngest sibling, I was always the last in line, which meant getting the dregs of the pudding. The hand-me-down clothing. Cold bathwater.

But that’s how it rolls in families. Age carries authority. I accepted this as just how it was.

I grew up and started finding my voice, embracing my emotions, and having opinions.

It wasn’t really a shock when no one listened or took notice. They wrote me off as oversensitive and dramatic, which I’d come to believe was true. And that’s when I started apologizing—for my opinions, for my moods, for just being me.

After all, I was young and desperately wanted to fit in and be accepted.

I was the anomaly. Surely that meant that I had to change? To be like them? Then I’d be normal. Then they’d all accept me, wouldn’t they?

Thus began a long period of inner conflict. When I felt emotions bubbling up, I would inwardly chastise myself and try to suppress them, much like shaking a bottle of champagne and trying to hold the cork in. Yup, it’s almost impossible. And potentially messy.

I really believed that I needed to be someone other than my authentic self in order to be loved.

It didn’t end there. The same hodge-podge of confused inner perceptions bubbled over into my romantic relationships too.

I believe that we attract people who mirror our inner beliefs about ourselves. This meant that over the years, my “significant others” were just as confused about their own identities.

I desperately reached to each of them for acceptance, for a sense of worthiness, for security.

But how could someone as conflicted and disconnected as I was offer anything other than more conflict and amplified feelings of unworthiness?

It was a vicious cycle—endless, futile, and disastrous.

The turning point wasn’t instantaneous. There was no “A-ha” moment. It was a gradual awakening. A yearning to understand. The rising dawn after the dark.

Over time I read many books, attended a multitude of courses and lectures, and meditated, always thirsting for more.

And slowly I re-connected with me. The real me.

I learned about self-compassion and self-love. And I patiently peeled away each layer of defensive protection until I finally embraced the fullness of being unapologetically me.

These are a few of the principles I’ve embraced.

There is only one version of me, and it’s special and amazing. Nobody else in the entire world is like me.

I have scars on my knees from tripping on trail runs.

I have an insatiable love of dark humor.

I prefer white wine over red.

Each preference and choice, like or dislike, is mine and mine alone. And that’s perfect!

I’m comfortable with other people’s discomfort.

I totally accept that I am not responsible for anyone else’s beliefs or perspectives. Those are entirely their own choice. If anyone dislikes or disapproves of me or anything I say or do, it’s their judgment, from their perspective. Not mine.

If they feel bad, I don’t have to fix it.

And I’m okay with it if they do.

I chose to spend last Christmas away, something that didn’t please my father. In his world, the festive season is for family. No Exceptions. Until now I’ve humored him and played along to keep the peace—to please—and resented every minute.

But last year I didn’t. I put my own needs first.

He tried self-pity and anger, but I stood my ground, respectfully.

I let him behave as he chose to, without it affecting me or my choices.

His reaction was his choice, and it led to unhappiness and distress.

His discomfort was his own. Completely.

He subsequently spent the holidays with friends, and had a really good time too.

So we both got to enjoy new experiences and grow a little. I’d say the discomfort was worth it.

My opinions are valid, and so are yours.

We’re all different, with different ideas and thoughts, and the way we see things is unique to each and every person.

It’s good that we differ. That’s how we expand our awareness.

And we don’t have to all agree. Ever.

We can share our thoughts and opinions, and we can listen to each other with curiosity. Just because it’s interesting, not because anyone has to be right.

That means that every opinion is valid and worthy of being heard, including mine.

I recently met a friend of a friend. She’s a first grade teacher and incredibly passionate about her work.

Somehow the conversation shifted to religion. Always a dangerous path, especially when it became apparent that we represented two opposite ends of this particular spectrum. I believe in a “higher being” and she doesn’t.

She asked me intently about every aspect of my beliefs, yet at no point did she try to counter or persuade me otherwise, nor I her.

There was just mutual curiosity and respect for the other’s right to choose. We agreed to disagree.

No egos. No need to be right.

It was a truly unique conversation. She definitely left an impression.

I love my emotions.

My emotions are my inner guidance system at work, which means I embrace each and every one of them. Especially the uncomfortable feelings.

As a young adult, I was a “pleaser.” It felt good when I made others happy, even if was at my own expense.

I would tolerate other people’s bad behavior, to keep the peace.

Around that time I was dating a guy. A really awesome guy, or so I thought.

He had a recreational drug habit, which I ignored. And it made him really moody, which I stoically tolerated.

It also meant he could be verbally abusive, and he would often not arrive for dates, unapologetically.

If I confronted him he’d ignore me for days, sometimes weeks. Classic passive-aggressive, but I knew no better.

Over time, I began to feel bad and resentful.

Wasn’t I being the perfect partner? Didn’t I deserve better?

But the unhappy feelings continued, unabated.

Something had to change.

We “pleasers” generally lack boundaries, of any type. In this case I needed some, desperately.

So I got clear on what I deemed as acceptable behavior and then I set some rules for myself, which I then implemented ruthlessly, without negotiation.

Not surprisingly, the relationship ended. But here’s the thing: I felt good and powerful!

My uncomfortable feelings had guided me to better ones.

It’s the perfect system (when we allow it to be).

We are who we are.

And we owe it to ourselves to love and embrace who we really are.