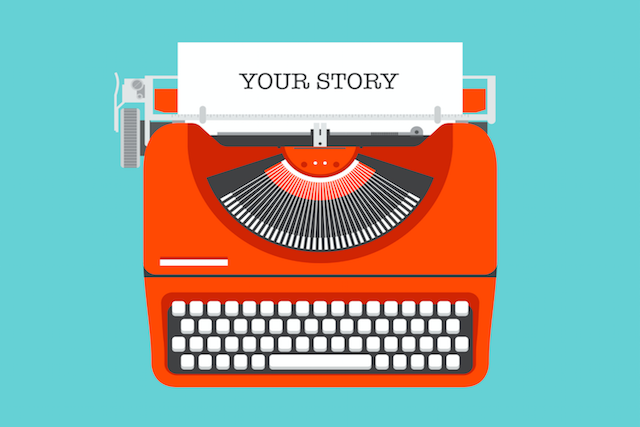 “When writing the story of your life, don’t let anyone else hold the pen.” ~Unknown

I grew up without a TV in my household. While most of my friends were talking about their favorite shows, I’d pretend to understand, nod along, and try to laugh at all the appropriate times.

While I had missed out on most of the shows and movies available during my youth, I didn’t miss out on all of them.

Whenever my dad would need to work late, my mom, sister, and I would head to his office and get set up in a conference room with a rented movie. It was during one of these times that I was first exposed to the Star Wars trilogy.

For many different reasons those three movies carry so much sentimental value for many millions of fans. For me, it was never the action, science, or acting that drew me in, it was the story.

It was about someone being whisked away from the boring life they knew, and some external force thrusting them into the middle of an amazing story.

Having witnessed this as a child, that was the plan I created for my own life. It wasn’t until much later that I could articulate this reality, but it always was there.

I was living my life expecting that at any moment I would be whisked away into an exciting and meaningful existence. I was living as if I was someone very important and was just waiting for my time to come, for my adventure to begin.

Fast forward to twenty-nine years old, almost eight years as an engineer with the last three wishing I could quit my job, and my fantasy wasn’t panning out.

I was beginning to get suspicious that nobody was coming, that my great adventure, the one that I just thought I needed to wait for, wasn’t going to show up. It was then that I started to consider the reality that I would need to change my strategy.

I still wanted the adventure and the meaningful life, I was just now realizing that what I had hoped for—that it would be given to me—was less and less likely to happen.

The mental switch I made was to move from being the main character in someone else’s story, to the author of my own story.

It was no longer that someone else hadn’t started writing the life I wanted, but that each day I would be responsible for writing it.

If it wasn’t what I had hoped for, it was my doing. One problem that I immediately realized was that I’d never written a story like this before, so where was I to start? That took some introspection.

Fast-forward three years and I’m improving as a writer, at least of my own story. My main character is engaging with risk, he’s growing, and he’s learning a lot.

I don’t necessarily know what the next few chapters look like, and I have no idea what the ending will be, but I’m hopeful, because right now my story is a good one, and I like where it’s headed.

What kind of story do you want for your life, and what are the principles and values that you hold for your main character?

Imagine at the end of this life we’ll all be comparing stories and someone will ask to see yours. When you look at what you’ve written so far and what you’re currently writing, will you be proud to show them, or wish there was more there?

Chances are if you’re reading this you’re privileged with an amazing amount of freedom, opportunity, and financial power, certainly when compared to most of human history and much of the world today. All of those are ingredients for an incredible story; what will you write with them?

Your story image via Shutterstock

Samuel founded The Little Yes coaching services to help professionals who feel stuck in their jobs find meaningful and fulfilling work. In addition to coaching clients, He writes to empower others to explore what meaningful work looks like, and help them understand how we became stuck in our careers.

How to Turn Everyday Life into an Adventure