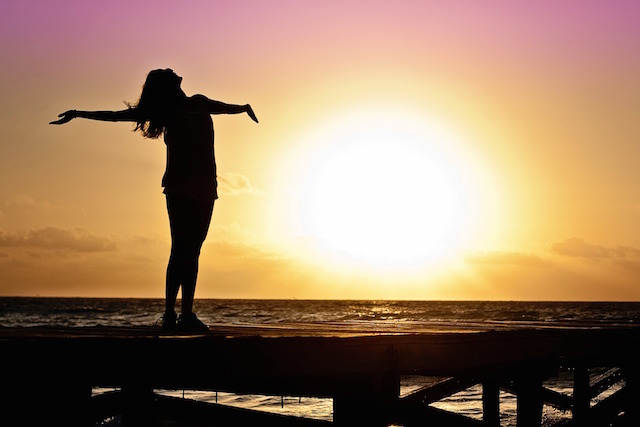 “Your time is limited, so don’t waste it living someone else’s life. Don’t be trapped by dogma – which is living with the results of other people’s thinking. Don’t let the noise of others’ opinions drown out your own inner voice. And most important, have the courage to follow your heart and intuition.” ~Steve Jobs

Two weeks ago, I pulled a muscle in my back. It was really scary in the moment, and initially I thought I was much more badly hurt—though it ended up healing miraculously quickly, after a couple days of intense pain and a couple more of moderate pain.

The morning that it happened, I sobbed on the bed as I laid motionless, telling my husband I couldn’t believe I’d hurt myself and that I maybe had a herniated disk or whatever it is people talk about, and I’d probably need surgery or at the very least, weeks of physical therapy, and how the hell was I supposed to drive to work that day, and then oh my God, the medical bills?!

After a little while, I calmed down after I realized I could move a little, as long as I didn’t move or rotate my spine, and my husband said it sounded like a pulled muscle rather than something skeletal.

After a little while, I drove in to work, in a lot of pain, and apologized to my co-workers in advance about the whining.

That night, sleeping on it made the pain even worse, and the next morning I bemoaned, “I can’t belieeeeeve I’m going to work. I’m in so much pain, how am I supposed to be present with a client? But I have to go.”

Normally, I’d have stayed home without too much of a fuss, but we were flying out to Texas that night to visit my family, and I hated the thought of missing an extra day when I was going on vacation for the next three workdays.

It also meant that I might not get to say goodbye to one of my clients who was discharging, which I felt sad and guilty about.

My husband has learned better than to tell me what to do, so he encouraged me to do what I thought I needed to. What I was subconsciously thinking in that moment was that I wanted him to give me permission to stay home, dammit, so I wouldn’t have to feel guilty about it!

I started driving into work and then called one of my colleagues (my Work Wife) and told her what was going on.

She thought of another solution where I may still be able to see the discharging client, and told me in no uncertain terms that I should stay home. I immediately turned around and drove home.

She had given me permission. I was relieved.

When I got home and my husband seemed surprised to see me, I got angry. He went about his regular day (as a teacher, he’s home for the summer) while I fumed on the couch, silent and in pain.

Finally, I broke the silence: “I’m upset because I wanted you to give me permission to stay home, and you didn’t, and then when I came home you looked surprised, which makes me feel like you think I should be at work even though I’m in a lot of pain, and it makes me think you don’t think it’s that painful, and IT IS!”

Of course, he did the patient husband thing where he says no, that’s not what he was thinking, and of course I’m in a lot of pain but he doesn’t want to tell me what to do.

So I continued to sit, slowly cooling down (it so helps me to articulate the story in my head like that) reflecting on this issue of “permission.”

It happened again today on a conference call with a couple peers in my industry, when I told them about a training I thought I needed to do to.

In talking it out with them, it became clear to me that I was just dealing with classic Imposter Syndrome, and was looking at an expensive and unnecessary training to try to alleviate that by making me “more legitimate.”

They gave me permission.

I was able to acknowledge that’s what I had been looking for, even though I hadn’t consciously realized it at first, and we laughed about it on the call.

One of the other women—further along in her business than me, with a booming, successful practice—shared that even with where she is in her business, she still struggles with this stuff, too, and still wants permission until she eventually circles around and realizes that it needs to come from herself.

I never would have thought of permission as something I struggle with, because I don’t hesitate for a moment to give myself permission for dessert or a new shirt or book. But it shows up in other ways—subtly, quietly, and then all the sudden I look up and it’s waving its arms going, “You’d better pay attention to me!”

The biggest is the permission to let myself slow down. To not be “productive” all the time. (And, news flash, this actually ends up working against me, because it turns out when you try to work on fifteen things at once, not much gets done!)

I am grateful for the people in my life who have given me permission when I was not in a place to give it to myself, and to other people who remind me that giving it to myself is possible, too.

If you’re like me, sometimes you need life to put an issue right smack in the middle of your path a few times before you really take notice.

The signs I got, courtesy of my injury and obsessing over feeling “legitimate,” helped me to see that I was struggling with an issue I didn’t even think I struggled with!

So if anything in my story resonated with you, consider this your sign: Whatever that thing is that you feel pulled to do, try, quit, or let go of, you don’t have to wait for permission from someone else.

Valerie Martin, LMSW, is a therapist, coach, writer, and singer who blogs about the intersection of mind, body and spirit. Her passion is helping people shed the behaviors and beliefs keeping them from being fully awake to the wonder and mystery of life. For hand-selected blog posts for Tiny Buddha readers, plus two free meditation gifts, visit http://wakingupinwonder.com/tiny-buddha-reader/.

Live Your Life Out Loud: 30 Ways to Get Started