You Don’t Need to Fix the Past in Order to Have a New Future
By Dr. Amy Johnson 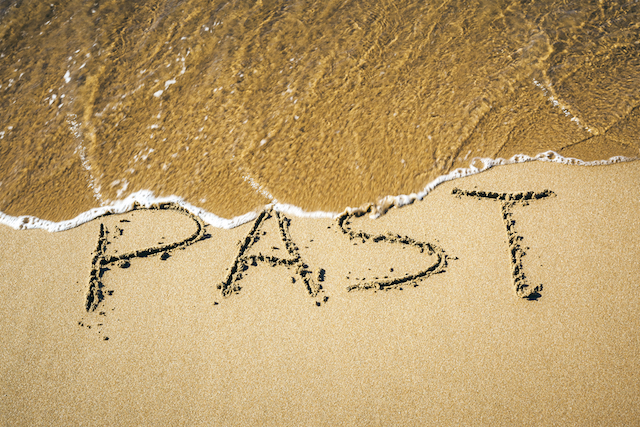 Note: The winners for this giveaway have been chosen! They are:

“The future is completely open, and we are writing it moment to moment.” ~Pema Chodron

My family recently drove from Michigan to North Carolina—twenty hours roundtrip. To entertain themselves, my five-year-old daughter Willow taught my three-year-old son Miller to play rock-paper-scissors in the backseat.

Miller learned the hand signals and got the overall concept pretty quickly, but he had a hard time with the fast speed of the game. Willow narrated, “Rock-paper-scissors…go! Okay, next round!” But Miller wanted to linger.

When he chose paper and Willow chose scissors, he’d see her scissors and quickly try to change to rock so that he could win the round.

Or if he chose rock and she chose scissors, he’d want to stop and hang out in his win for a while. He’d celebrate, gloat, and become frustrated when she was already on to the next round.

My husband and I tried to explain to Miller that it was a quick game with no time to hold on to what was already done. There’s also no need to hold on—each round brings a brand new chance to win or lose.

While we tried to teach him that it made more sense to leave the past behind and look toward the next round, his let-it-go-and-move-on wasn’t up to par compared to his older sister’s.

Miller turned rock-paper-scissors into a slow, thought-heavy emotional roller coaster, where every move felt important and meaningful. What could have been a fun and easy game was not very fun for him.

It was clear to see how Miller was getting in his own way. And then it hit me that I—and most people I know—do the same thing in our adult lives. We innocently get in our own way as we focus on what we don’t like and try to make it better when it would be far easier to leave the past behind and look toward the “next round.”

Life is always moving through us—nothing is permanent. New thought and emotion flow through us constantly, creating our rotating and fluid experience of life.

Sometimes we stay out of the way and let our experience flow. Willow was staying out of the way as she played rock-paper-scissors (and she was having a great time, I might add). And sometimes we’re more like Miller, innocently blocking the easy flow of life with our opinions, judgments, and disapproval. We don’t pick up and move on as much as we focus on righting what is already over.

In hindsight, I can see how I’ve dammed up my own flow of experience at times in my life, especially when I was struggling with things I wanted to change.

When I was facing a confusing and uncontrollable binge eating habit, for example, I thought what I was supposed to do was to examine it, analyze it, talk about it, and focus on it with a whole lot of emotion and energy until I made it go away.

But more often than not, that created more suffering. It left me even more convinced that my habit was a serious problem that I needed to solve, and it left me feeling hopeless because I didn’t know how to solve it.

Of course, there’s a lot to be said for understanding ourselves and our experiences in a new way and taking action where action is needed. Those are absolutely necessary. But keeping our “problem” under a constant microscope, trying to use our intellect to solve it as if it’s a crossword puzzle, is not the way to freedom.

If new thought, emotion, and insight are always flowing through us like a river, doesn’t it make sense to look upstream at what’s coming next, especially when we’re experiencing something we don’t like? It’s just like we told Miller in rock-paper-scissors: if you don’t like what happened in this round, let it go and look toward the next round.

But we forget this when it comes to the big things in life, don’t we? It seems responsible, necessary, or adult-like to hold the problem tightly until we fix it.

If our moment-to-moment experience of life is like a river rushing through us, our “fix-it” attempts are the equivalent of standing in the middle of the river, filling a bucket with the water that has already flowed past and carrying that bucket with us everywhere we go.

We obstruct the momentum of the river and analyze that old, familiar “problem” water to death, not realizing that if we only turned and looked upstream we’d have an excellent chance of seeing something new and different.

Looking upstream we might see with fresh eyes—looking downstream, we’re just looking at more of what we already know.

With regard to my binge eating habit, I realized that my best chance for change would come from letting go of everything I thought I knew and being open to fresh, new insights and ideas. Not carrying around the past or analyzing the problem; instead, being open and unencumbered.

As I began to see my habit-related thoughts and behaviors as things flowing by me that I didn’t need to grab ahold of, they passed by more easily. Each and every day I found myself less in the way, realizing that I was very separate from those unwanted thoughts and urges.

When my habit-related experience looked more like leaves floating on the surface of the river than like gigantic boulders, life took on a new feeling of ease. I saw that I could gently dodge some of what was coming down the river rather than stop and fight with or fix it. The healthy “me” was more visible than ever.

Not staring at your problems is not ignoring or denying the issue any more than Willow was ignoring or denying the previous rock-paper-scissors round when she easily moved on. Take note of how your experience feels. When life—which really is very game-like—feels like a difficult, not fun, emotional rollercoaster, you’re holding on to something, innocently getting in your own way.

Maybe even the bigger issues in life really aren’t so different than rock-paper-scissors—you get what you get, but you don’t have to stay there and try to change the last round. Let life flow and as you do, the healthy, clear, peaceful version of yourself will be more visible than ever too.

NOTE: Amy has generously offered to give five copies of her new book, The Little Book of Big Change: The No-Willpower Approach to Breaking Any Habit. Leave a comment on the post for a chance to win! You can enter until midnight, PST, on Friday, February 5th.

Past in the sand image via Shutterstock

Finding Peace: Take Power Away from Your Thoughts and Emotions