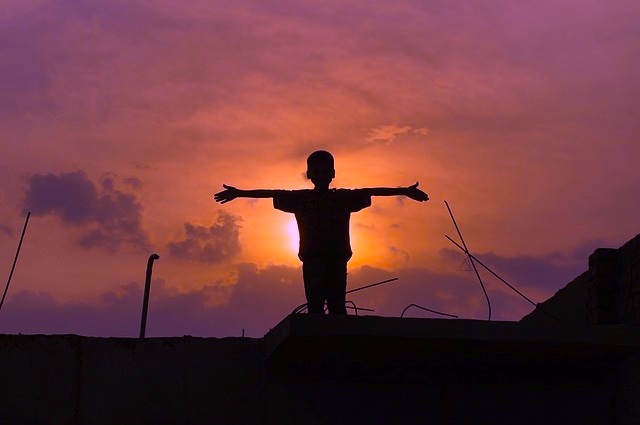 “You alone are enough. You have nothing to prove to anyone.” ~Maya Angelou

I sat on a big, cold stone on the beach next to Lake Ontario and watched as the waves lapped upon the shore.

To my right, there were swans and ducks floating on the water. The swans were graceful and beautiful as they glided along the shoreline, and the ducks were being their usual kooky selves.

It always made me laugh to watch them dive underwater, kick their webbed feet in the air, and wag their feathered bums back and forth. They were so natural, so unaware of my presence, so carefree.

I admired them for their untroubled lives and yearned for what they had—the complete and total lack of care for what I thought of them.

To my left in the distance, I saw the CN tower and the surrounding high rises of Toronto. I was in college studying acting for film and television, which had always been my dream.

But now, sitting next to the vast open water under the clear skies and watching as the waves slowly rolled up and receded, breathing in the fresh air, I realized this was the most content and peaceful I’d felt in weeks.

All of my life, I wanted to be an actress. I wanted to see my face on the big screen, my name credited in large, bold letters; to be a guest on talk shows and able to meet all of the successful actors I admired.

I also loved the craft of acting itself and thought that connecting with other people was so beautiful. But since coming to college four months ago, all I’d really felt was judged.

Rosalind Russell said, “Acting is standing up naked and turning around very slowly.” That’s exactly how I felt in my program, every day.

Day after day, I would pour my heart and soul into a performance for my professor and my classmates. I’d receive some small praise but buckets and buckets of criticism on top of that—what I could have done better and what was wrong with what I did or how I looked.

Deep inside, I knew that that was how I’d learn, grow, and become better, but the constant flow of negative feedback was really taking its toll on me. Most days I would go back to my small residence room and cry about how terrible I was.

I never felt good enough. I hadn’t yet realized that I was so afraid of judgment from other people because I was constantly judging myself.

Flash forward to exam week and I was sitting on the beach. To my left was the city. The hustle and bustle, the crowds, the competition, and the never ending flow of judgment and criticism.

To my right was the gentle blue waves, the soft stones and pebbles strewn along the sand, the ducks in all their carefree and content splendor, the swans with their heads held high, floating peacefully along the shoreline.

I knew in that moment that I would have to make a choice.

I either had to dedicate myself wholeheartedly to this profession, with all its criticism, or walk away and find something new. Both choices were equally daunting.

I always loved nature, and being immersed in it made me feel so calm. Life became simple and easy in those moments and it was okay to be me.

But I also loved performing—the sound of applause and the times when the light shone on me and I was approved. The brief moments when what I did was good enough.

The ducks didn’t need anyone to tell them that they were good enough. They didn’t have to memorize a script, work on it for hours, find the perfect costume, and perform their guts out to earn a single head nod.

The ducks were simply themselves. They didn’t care that there was someone on the beach. They didn’t instantly attempt to straighten their feathers or worry about whether or not I liked how they were swimming. They were completely at ease. Free.

I knew that if I continued down the path an actor takes, judgment was going to be with me every step of the way. It would be there for every performance, every agent I met, and every audition room I entered. What everyone else thought would always matter.

I decided that I would much rather be a duck with ruffled feathers and happy with myself than someone constantly striving and working toward validation from others, which was how I felt as an actress.

I had also started to hide behind the characters I was playing as a way to avoid being myself. That day, I resolved to find a different path, one I could walk down as me.

I gathered up my courage and withdrew from my program, which was terrifying. Dropping out meant letting go of the image I had of myself, and the image everyone else had of Stacey, the actor.

I had to let go of the idea of me, the idea I loved, the idea of who I wanted to be, in order to accept who I really was as a person.

Just as I was judged when acting, I knew I could also be judged for leaving it behind. But that simply didn’t matter anymore.

The truth is there will always be judgment in life. There will always be someone to tell you that you aren’t smart enough, thin enough, or successful enough. You can’t change what people think. The good news is you don’t have to. If you believe in yourself, nothing else matters.

Sitting on that rock alone, appreciating the breeze in my hair and smiling at the ducks, I finally embraced the truth. I was already good enough. And it was in that moment of acceptance that I was truly free.

You can’t change people but you can change how you respond to them, which is what I did. Now, I acknowledge the criticism when it comes and immediately let it go. When someone offers support, encouragement, and love, I bring it in and allow it to raise me up higher.

The wonderful part of self-love is that once you know you are good enough already, there’s no way to go but up. The negativity fades and the positivity grows. Embrace the security, contentment, and inner peace that come with accepting yourself.

How can you accept yourself today? My best advice is in three small words: be a duck!

Let the judgment and criticism from others slide off your beak like water, swim how you want to swim, look goofy with your bum in the air, make silly sounds, do whatever makes you happy without caring what anyone else thinks, knowing you are wonderful exactly as you are right now.

Shout it from the rooftops and let the whole world know.

Because you really are. So, give yourself permission to be you. Accept, believe in, and love yourself knowing you are already enough and you don’t need anyone else to tell you that. It is only once you accept yourself that you’ll be free to live the life you’ve imagined.

“Be who you want to be, not what others want to see.”

I learned that lesson from the ducks. And for that, I’ll be forever grateful.

Stacey Lance is a lover of nature, animals and kettle cooked potato chips. She is an aspiring writer who would love to make a difference in the world and help people in whatever ways she can. She dreams of one day living by the ocean and owning an English bulldog.

The Antidote to Criticism: Turn Others’ Doubt Into a Standing Ovation