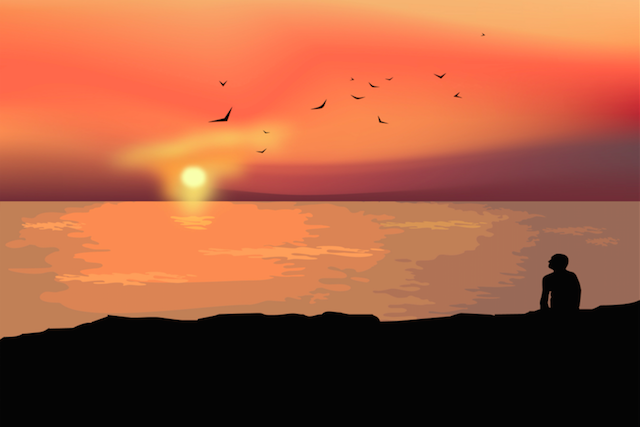 “When you are not honoring the present moment by allowing it to be, you are creating drama.” ~Eckhart Tolle

Well into my twenties, all of my friendships with women looked a lot like junior high.

One day, we’d be codependent and attached at the hip, sending incessant play-by-play emails throughout the workday like one too many notes in class.

The next day, we’d be dragging each other by the hair into a heap of combined emotional issues, complete with nasty suspicions, unfounded accusations, and a dramatic reconciliation that would inevitably be short-lived.

Shortly after one toxic friendship eroded, I found a new one, like a mythological creature that regenerates its head immediately after it’s cut off. Things weren’t much different with the men I dated.

For a long time, I lamented all the damaging relationships I’d been in, as if I was some kind of victim who always got the short end of the stick.

Then one day I realized there was a reason I always found myself in dramatic relationships: I was attracted to drama like a moth to a flame.

Chaos was the status quo for the majority of my life, and when it wasn’t there, I panicked. I didn’t feel comfortable unless I was fighting someone, or at the very least, fighting myself.

The things I said and did contradicted because it was easier to blame the world and stay the same than it would be to really see myself and make a change.

Maybe your close friend has as many catastrophes as there are days of the week. Maybe you’re the person everyone calls with their problems. Or maybe you unknowingly turn small issues into major crises and you’d like to stop feeling so overwhelmed.

Whatever the case, you probably have at least a little drama in your life that you’d like to minimize.

With this in mind, I recently asked on the Tiny Buddha Facebook page: How do you minimize drama in your life? I took a sampling of the 183 responses and formulated this guide to defusing drama:

You get what you put out. If you act in a way that is positive and minimal drama, you attract the same kind of positive situations and people. ~April Myers

Drama usually comes from my reaction to other people’s actions. I stop to think: Does this really matter in the long run, or am I just trying to be right? ~Anita Grimm-Hohl

I minimize drama within myself. When I’m focused and calm, so is the world around me. ~Cynthia Ruprecht Hunt

If there’s drama in multiple areas of your life, be honest with yourself—you’re the constant. Are you creating it? We don’t do anything repeatedly unless there’s something in it for us, so, what’s the payoff?

Are you looking for attention or excitement? Did you grow up with drama and you just plain feel best when there’s some around you?

Now aim to find alternative solutions. If you’re looking for attention, can you get it more directly? If you’re bored, what new adventure can create in your life?

Be happy about little things, let the big stuff go because I can’t change any of it. ~Grace Foo

I zoom out in my mind to a point far enough away and above so that I can see things in my life for what they are. By doing this, I can see from a distance how small and unimportant the situation is in the big scope of the universe. ~Larry Stilts

Is this situation going to matter a year from now? If not, it’s not worth worrying about. ~Angela Orr

A lot of the drama takes place in our own heads, and it’s usually because we’re too deeply immersed in a difficult situation to recognize it isn’t as dire as it seems.

If you feel yourself getting overwhelmed by a situation, step back and realize this feeling isn’t permanent—nothing is. Then focus on action steps—on the things you can control. What can you today to proactively create a solution?

3. Don’t feed into other people’s drama.

Build a reputation for not participating in drama. ~Addy Rodriguez

Just be. Anything you resist persists. Don’t add any negative or positive focus on it. ~Nikki Star

Speak less, listen more. You have time to hear and see the drama and sidestep it. ~Alexis Benjamin‎

Be an observer. Not everything needs a reaction. ~Angelina PhouGui Chan-Ong

If someone repeatedly comes to you with catastrophes, give yourself a window of time when you’ll listen, and then take care of your own needs by walking away. Also, resist the urge to jump into a pity party. Oftentimes people calm themselves down when other people don’t validate their complaints.

Lastly, focus on your breath. Your calming energy may even help them let go.

I realize that spending time by myself is always preferable to spending time with someone who wants drama. Nothing wrong with a dull day. ~Stephanie Goddard

Remove the source of drama from my life. It really is that simple. ~Claudia Jacobs

Take an inventory of which people in your life leave you feeling stressed and unhappy more often than not. If you don’t want to completely remove a toxic relationship, minimize the time you spend together.

If you don’t want to change how often you see each other, recognize drama triggers. When the conversation moves toward her horrible mother, steer it somewhere else.

5. Be clear and straight with other people.

Be as open and honest and communicative as possible. Listen without reacting. ~Faith McGregor

If I have an issue with someone I go straight to them to talk about it, and I don’t talk to anyone else about it if they aren’t involved. Gossip breeds drama! ~Kristie Sherman

Drama comes about because of either misunderstanding or overreaction. Be as honest and open in all cases as possible. Quell your own negative emotions, which will in turn diffuse the negative emotions of others. ~Vito Ruiz

A lot of drama comes from poor communication and confusion. Eliminate it by finding the courage to say exactly what you mean. It may be harder in the moment, but it can save a lot of heartache in the long run.

On the flip side, let people know that they can be honest with you. If someone thinks they need to walk on eggshells around you, they’ll likely hold things in—but they will come out eventually, if not in words, in resentful actions.

6. Be slow to label something as “drama.”

When it comes to people you know you love, always take an extra moment to reconsider, if the “problem” is actually a problem, if it’s worth making a big deal out of it. ~Christian Andersen Hauge

I realize that life is a roller-coaster and my problems are much like others’ at different times. ~Margaret I. Gibson

Love them a little more. It’s who they are. It might even be you. ~Ed Pulsifer

Don’t speculate, good or bad. Simply deal with what’s actually in front of you. ~Michael Stodola

Sometimes what we’re labeling as drama is just someone who really needs us. Instead of expelling mental energy judging the situation as good or bad, focus on being there and being a friend in the moment.

Then be a friend to yourself and let the drama go when you walk away.  A lot of the drama we experience in life comes from our interpretations of the things we experience—particularly after the moments have passed.

I attempt to allow the inevitable episode, extract any potential meaning or lesson, and equally allow it to pass. ~Joel Olmstead

I try to see the learning experience in the drama. And I think of the sentence “Without rain you can’t enjoy the sunny days.” ~Anja Feijen

Accept it, learn from it, and go on with life. ~Vincent Neerings

Sometimes it seems like drama happens to us, and we’re powerless to remove ourselves from the cause. Another perspective is that every time we find ourselves immersed in something that seems overwhelming, we have an opportunity to learn how to deal with challenges better.

Life will always involve mini fires that we feel desperate to put out. If we can learn not to fan them, they may actually be able to light our way.

Some of the Facebook responses were slightly edited for spelling; some were part of longer responses with more detail.