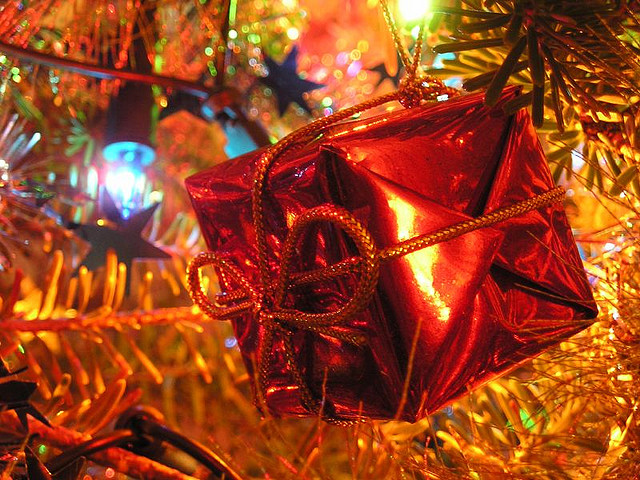 There’s something magical about this time of year, and it has nothing to do with the Santas posted like soldiers at various points throughout the globe or the million volts of electricity that light up Main Streets the world over.

I’ve always loved Christmastime because the season inspires people to focus on everything that’s important in life.

The usually harried slow down just a little to stop and smell the mistletoe, while humming along to redundant Christmas songs they secretly enjoy. Fighting relatives shelf their differences to share egg nog and brandy, bonding over the shared experience of wearing atrocious holiday sweaters from Christmas gifts past.

I know holiday euphoria well. Since I always spend at least two weeks visiting my family around Christmas, the season packs double the punch—the infectious excitement of Yuletide energy and the joy that comes from sharing it with people I appreciate all the more for seeing them less.

And then there’s the gift component. People may lament the commercialization of Christmas, but there’s something about it all that appeals to me. I love watching shoppers give to the Toys for Tots stand in the mall, recognizing just how many people do good things without needing recognition or reward.

I also love the opportunity to mass-gift my family at a time when positive feelings are already heightened. Historically, I’ve devoted hours to plotting which gifts I’d give them, imagining how their eyes would light up when they opened them, like Ralphie’s teacher’s when she read his essay about wanting a Red Ryder BB gun.

It might be the least meaningful part of the holiday season, but I’ve seen a lot of loving purpose among the humming shoppers scouring the shelves for people they love. Something about the fleeting magic of it all seems to make people more mindful; after all, the holidays come but once a year and they are, in fact, for giving.

After years of surviving on meager paychecks, I’ve learned having less money can actually help us give a lot more. Some of the most meaningful gifts I’ve given or received have cost little to nothing.

I’ve dug through the archives of my holiday memories to share a few ideas for meaningful gift-giving: 1. Appeal to a niche interest.

In college, I spent a semester abroad. Knowing my mother collects coins, I saved a handful from each of the twelve countries I visited, totaling a few American dollars in worth.

I bought a carved wooden box in Italy, where my great grandparents were born, and used this to hold the change. To my knowledge, this is the only gift I’ve ever given my mother that she still has and shows to people.

You don’t have to have a Eurail pass to appeal to a hobby. EBay is a virtual treasure trove when it comes to collector’s items. Regardless of what the gift is, this shows you notice and respect someone’s interests.

2. Think outside the mall.

My father loves seafood almost more than he loves his children. It’s okay; we all get it. We have an unspoken understanding that it’s every man for himself when lobster hits the table.

One year, I bought him a couple of huge lobsters the day before Christmas. I wrapped up a butter dish with a note that said, “Your gift is in the fridge downstairs.” It wasn’t a present he could wear or save forever, but I know he lot more enjoyment out of that meal than the tie I could have bought him.

Any time we show people that we’ve paid attention to what actually brings them joy we let them know how much we care.

One year, while I was touring the country with a marketing campaign during the fall, I decided to make an afghan for every member of my family. I had three months-worth of ten-hour drives—plenty of time to make it happen.

Each blanket took me roughly twenty-five hours, for a combined seventy-five. To this day, my brother has that Italian flag afghan on his bed. I love knowing that even though I live 3,000 miles away, he still has something I made for him while missing him on the road.

If you’re into handmade gift-giving, I recommend checking out this article with 100 homemade gift ideas.

When my brother was about five years old, he was all about Teenage Mutant Ninja Turtles. I can’t tell you how many times a pint-sized Ryan somersaulted and then jumped on me with plastic nun chucks while shouting, “Cowabunga Dude!” The other day, I saw a DVD set with all three turtles movies.

I expect this blast from the past will tempt him to toss his twenty-four-year old body into a tumble, though this isn’t a fool-proof plan. The year I bought my mom magazines from her childhood on eBay, I’m pretty sure she said, “Oh yeah, cute.” Though she clearly contained her excitement, I suspect she was ecstatic inside.

For Valentine’s Day and last Christmas, I channeled my inner nine-year old and made my boyfriend “holiday coupons.” The first book contained a bunch of different limited-time offers, including a back massage, a homemade dinner (which he respectfully declined—something about frozen chicken patties I burned), and a “You’re right, no questions asked” pass.

Well, for Christmas it was actually twenty “You’re right” passes. He requested those specifically, and he’s used them with abandon.

Coupons don’t have to be a romantic gift. If you plan to back them up, you can give anyone a book of intentions for the future—walking their dog, babysitting for a night out. There’s something soothing about getting messy with markers and glitter, and I believe that joy passes on with the gift. (Note: you can find and print gift coupons online, as well).

This is also a great way to give people what they really want from us—our time and attention.

6. Show them their kindness.

Earlier this year, my mother let me use her timeshare in Vegas with my sister and our boyfriends. We had a week in massive four-room suite. It was the first time my sister and I vacationed together without the rest of our family, and we couldn’t have been more grateful.

The four of us got a picture in Mandalay Bay in front of the dolphins and found a colorful Vegas-themed frame. This was actually a birthday gift. Regardless, I know my mother enjoyed the reminder of the adventure she facilitated.

Some other ideas to remind people of their own kindness: invite your sister, who taught you to cook, for a homemade dinner at your house; take your aunt, who fostered your love of theater, to see a play; or write a blog post for your cousin who helped set up your site.

My sister and I had a major falling out in our teens that culminated in a two-year silent treatment. All growing up I wanted to be around her and be like her, and I felt devastated when our mutual loathing grew far beyond than normal adolescent angst.

Though we eventually resumed a functional relationship, it was only a few years ago when we started getting close. Two Christmases back, she wrote a poem for me. She listed all the ways I impress and inspire her and ended by calling me her hero.

It’s not that hard to get me teary-eyed—I’m a big puddle of love and I spray it around liberally—but this touched me more than any other gift I have ever received. I will never forget how much it meant to me that she not only felt that way, but took the time to write it in iambic pentameter.

There are limitless ways to give back to the world while giving to people you love. You can donate in someone else’s name, or buy a gift that supports charity. Some resources to explore:

What’s the most meaningful gift you’ve ever given or received? Have any suggestions to add to this list?

How to Reduce Holiday Stress by Setting Strong Boundaries