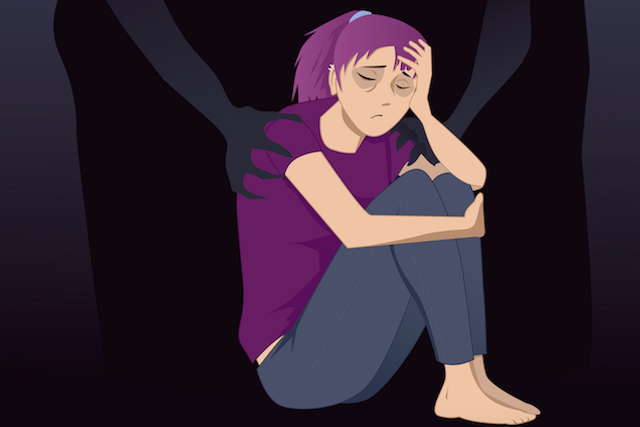 “Sometimes just being there is enough.” ~Unknown

It felt like I couldn’t breathe. Like someone was holding me by the neck, against a wall, and the floor might drop beneath us at any moment.

I’m describing a panic attack, but this has actually happened to me before—being held by the neck against a wall, that is, not the other part. Growing up I experienced many moments like that, moments when I felt unsafe, physically and emotionally.

There were countless experiences that reinforced to me, over the years, that I couldn’t let my guard down, because at any moment I could be hurt.

And I learned to see minor threats as major problems, because that’s another thing I learned as a kid: Sometimes seemingly small things could make other people snap.

Unsurprisingly, I grew into an adult who snapped over small things all the time.

Got bleach on my interview outfit? No one will ever hire me now!

She doesn’t want to be my friend? Why doesn’t anyone love me?

Okay, so that last one isn’t actually a “small thing,” but the point is I was constantly scared. Life was a string of lions to tame, and I lived in a land without chairs.

I believe my early experiences, being mistreated in varied environments, led to my years of depression and anxiety. For you or your loved one, there may be other causes.

Some people are genetically predisposed to anxiety, some struggle because of stressful circumstances, and for some, physical conditions play a role.

Anxiety can completely overwhelm your mind and body, and we often exacerbate our pain by being cruel to ourselves in our head.

“Get it together!” we scream at ourselves. “What’s wrong with you? Why are you such a mess?”

But none of these thoughts are helpful. Though the people who love us are generally not as cruel, they sometimes say less than helpful things, as well, solely because they don’t know any better.

Even as someone who has experienced anxiety, I have said some of the things below to others because it feels powerless to see someone struggling. And when you feel powerless, it’s hard to think straight.

All you know is that you want to fix it for them. You want to have answers. But sometimes when we’re in fix-it mode, despite our best intentions, we inadvertently add fuel to the fire.

So, as someone who’s been on both sides of the coin, I’d like to share some phrases to avoid when someone is dealing with anxiety, and offer a little insight into what actually helps.

Things Not to Say to Someone Who’s Struggling with Anxiety

1. What you’re stressing about won’t even matter in a year.

In many cases, this is true. If someone’s worrying about a minor car accident, it’s entirely likely what they’re stressing about won’t really matter in the grand scheme of things. But this isn’t a universally true statement.

It’s not reassuring to tell someone the worst-case scenario won’t happen because sometimes, it does. But more importantly, in that moment when someone is in the midst of anxiety, it feels catastrophic, and you can’t rationalize those feelings away—at least not immediately.

They also need a reminder that in this moment, they are safe. And that’s all they need to think about right now: breathing and grounding themselves in this moment in time.

All this does is create more anxiety, because in addition to whatever that person was initially stressing about, they now have to worry that they’re missing out on life because of an emotional response that feels beyond their control.

Yes, life is short. And we all naturally want to make the most of it. But you wouldn’t tell a diabetic “Life is too short to have too much sugar in your blood.” Sure, you’d encourage them to make healthy food choices, but you’d realize this phrasing would vastly oversimplify the effort required from them to manage their condition and maintain healthy habits.

The same is true of anxiety. Anyone who’s struggled with it understands there are far better ways to live, and this knowledge pains them. What they may not know is how to help themselves.

“Calm down” is the goal, not the action step. It’s what we all want to do when we’re panicking. It’s the shore in the distance, and it can feel miles away as we gasp for air in the undertow of emotion and struggle to stay afloat.

If you know any good methods that help you calm yourself—deep breathing exercises, for example—by all means, share them. But it’s probably best not to get into much detail in the moment when someone is panicking.

Imagine someone hanging off a cliff, about to fall into a pit full of tigers. That’s what anxiety can feel like.

If you were to stand at the edge and scream, “COME TO YOGA WITH ME TOMORROW! DID YOU KNOW THAT YOGA CAN HELP YOU…” that person would likely be too consumed by their terror to hear you your convincing argument.

What they need to hear in that moment is “Take my hand!” And the same is true of anxiety. Hold their hand. Help them breathe. Help them come back into the moment. Then, when they feel safe, that’s a good time to tell them what’s helped you.

That’s another important thing to remember: We all want to hear what’s helped other people deal, not what someone who’s never experienced our struggles has read about. Share your experience, not your expertise. None of us need a guru; we need friends who aren’t afraid to be vulnerable.

This comes back to the first point: In that moment, it feels like a big deal. A very big deal. It feels like the biggest, scariest, worst thing that could happen, and you can’t turn that fear off like a switch.

When someone says, “It’s not a big deal,” the anxious mind translates this as “You’re overreacting—which is further proof that you’re broken.”

Instead, try, “I know it’s hard. And scary. But you’re not alone. I’m here to help you get through this.”

It’s amazing how much it helps when someone reinforces that it’s okay to be scared—it’s human, even—but we don’t have to face it alone.

Yes, thoughts and fears all originate in our head, but that doesn’t make our feelings any less real. The anxious mind translates “It’s all in your head” as “Your head is defective,” because knowing that thoughts fuel anxiety doesn’t make it any easier to stop thinking anxious thoughts.

When we’re thinking anxious thoughts, what we need is a reminder that they often arise naturally—for all of us. We don’t need to worry about changing them. We just need to practice accepting them when they arise and disengaging from them.

So try this instead: “I can understand why you’re thinking those thoughts. I’d probably think some of the same things if I were in your shoes. If you want, you can tell me all your anxious thoughts. They’re trying to protect you in their own way, so maybe they just need to be heard and then they’ll quiet a bit.”

I have, over the years, written many posts with advice on letting go. I believe it’s healthy to strive to let go of anger, resentment, fears, the past, and anything else that compromises our ability to be happy and loving in the present.

I think, though, letting go is something we may need to do repeatedly. It’s a practice, not a one-time decision, and certainly not something we’re well equipped to do in a moment when we’re gripped by fear.

Jon Kabat-Zinn wrote, “It’s not a matter of letting go—you would if you could. Instead of ‘Let it go’ we should probably say ‘Let it be’.”

That’s what we need in the moment when we’re panicking: We need to give those feelings permission to exist. We need to give ourselves permissions to be a human being experiencing those feelings. And we need to know the people around us love us enough to accept us as we are—even if it might make them feel more comfortable if we were better able to just “let it go.”

7. Things could be so much worse.

Yes, things could always be worse, we all know this. Like many statements on this list, this phrase does little other than evoke guilt. And for the anxious mind, guilt can lead to more anxiety.

Now, on top of their initial fears, they’re worrying that they’re not a good person because they can’t rationalize their anxiety away with gratitude.

I’m not suggesting that it never helps to put things in perspective, but coming from someone else, this almost always sounds condescending. Condescension leads most of us to feel inferior, and it’s even worse when we’re already feeling ashamed because of our struggle, as many of us do.

Anxiety isn’t just about negativity. For many of us, like me, it’s a learned response from a traumatic past in which we felt persistently unsafe. You can train your brain to be more optimistic, and in doing so, minimize anxious thoughts. But this involves far more time, effort, and support than the phrase “be positive” conveys.

Also, “be positive” suggests that “positive” is something one can become—permanently—which ignores the reality that lows are inevitable in life. No one is positive all the time, and often the people who seem to be are actually being passive-aggressive.

Phrases like “Look on the bright side” and “See the glass as half full” can seem incredibly patronizing when you’re hurting. They minimize just how hard it can be to see the world optimistically, especially when you’ve experienced trauma.

So instead, show them what it looks like to be positive. Be loving and open and calm and accepting and supportive and present. This probably won’t heal them of their struggle or banish their anxiety in the moment when they’re panicking, but it’s amazing how you can affect someone for the better by being a healthy mirror.

After reading this list, you might think I’m suggesting there is no way to heal from anxiety; we just need to help people accept it and get through it. But that’s not actually my point.

There are tools out there to help people. You can find some of them here. (I personally recommend therapy, yoga, and meditation, as these three tools combined have helped me learn to better regulate my emotions.)

My point is that even when someone is making the efforts to help themselves, it takes time, they may still struggle, and in those moments, they simply need love, acceptance, and, support.

We all do—even you, loved one who tries your best and has only the best intentions.

If you’ve said some of these things in the past, know that we recognize you’re imperfect, just like us, but we still appreciate all that you do. We also appreciate that you read articles like this to better understand and support us.

The world can be a scary place, but knowing that people, like you, care enough to help us makes it feel a whole lot safer.