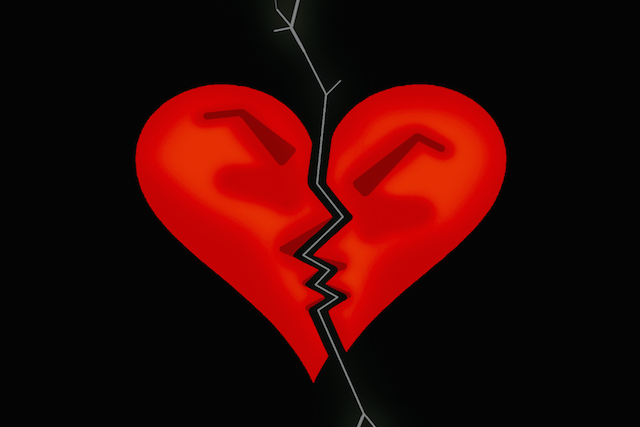 “When the wrong people leave your life, the right things start to happen.” ~Zig Ziglar

The end of a relationship triggers many grief emotions, but when a couple breaks up because one person decides that it’s over, there is a very distinct pain: the sting of rejection. It doesn’t matter whether things had been difficult for some time or if the split came out of the blue; either way, rejection feels cruel.

At the end of my marriage eight years ago, I had no idea that the breakup was coming. On top of the shock that the relationship was suddenly over, I carried the intense and overwhelming feeling of rejection; I was no longer valued, wanted, or needed.

Rejection can trigger feelings of shame, low self-esteem. and diminished confidence as well as helplessness and victimization. If you are left for another person (which was my experience) the intensity of rejection increases further. I experienced anger and resentment about betrayal; this makes healing feel much harder than in those cases where a decision to split is mutual.

When I began move through my initial grief, I found that the biggest shift in moving forward came through changing how I viewed rejection. I realized that by identifying with the feeling of rejection I was telling myself that something was wrong with me; that the marriage was over because I hadn’t come up to scratch and, therefore, needed to be let go.

Of course, this was not true but in the mind of the injured party, it was natural to feel this way. By shifting my perspective, I eventually began to realize that my husband’s decision to leave was not a reflection on me.

It is always hugely important to acknowledge and process feelings of grief; reframing is not about burying your emotions. However, as I’ve learned from my experience, rather than simply waiting for time to be your healer, you can move through pain far sooner and more effectively by viewing your situation in a different way.

Here are five ways I helped myself reframe the rejection.

1. It’s not necessarily about you.

It’s almost impossible not to take rejection personally. My ex-husband said he left because he wasn’t getting what he needed from our relationship; he needed to follow his “truth,” which no longer included me. His narrative of the breakup became about my inability to be what he needed.

This is where shame really kicks in. Rejection tells you that you weren’t enough to keep your partner from leaving and, in some cases, you’ve been replaced with someone who can make them happy.

But what if it’s not all you? As personal and hurtful as the rejection feels, sometimes it happens because the other person is unable to give enough or be enough of what the relationship needs. When someone is unable to love you fully, they will either reject you, or stay in the relationship and treat you badly or indifferently enough until you decide to end it.

We are all human and it’s very rare that one person is flawless within a relationship. I felt far less rejected when I realized that my ex-husband had his own considerable struggles and issues that led him to choose to leave; it wasn’t all about me.

There is a spiritual school of thought that views the people in our lives as lessons. The theory goes that we meet no one by accident; we are all in relationship to further our growth and deepen our connection to ourselves and the universe/each other. Partnerships with a significant other are huge vehicles for growth, but when the learning has gone as far as it can go with one person, it must end.

Sometimes people leave our lives naturally and comfortably, other times we face the pain of rejection. The lesson is not always obvious at first, especially through the pain of grief, but what is initially perceived as rejection can also be viewed as a release from a completed assignment and an opportunity to learn.

Consider that you still have much more to achieve with your life, and maybe your partner was not the person to show you the way. Perhaps being released from your relationship will allow you to find what you really need to become the person you are meant to be.

This reframe can be wonderfully comforting if you choose to find love again in the future. If you learn your difficult lessons from the old relationship, you will grow, and the person you share the next stage of your path with will bring more fulfilment and easier challenges.

When someone chooses to leave you, they not only decide that the relationship is over, they also determine “the story” of why it ended. So, why did my marriage end? The event that ultimately broke us apart was his leaving to be with someone else. However, on another level, there was more to it than that.

I had changed within the marriage; I had been working through a deep personal issue a year or so previously, and had come out of the other side stronger, more content with life, and ready for a happier future with our family. I had grown, but my husband had not changed with me.

When I became aware of this, I started to view the ending as less about rejection and more about an incompatibility between who we both were. It was an empowering reframe because it allowed me to feel far less victimized. The way he ended the marriage was not excusable, but it held far less of an emotional grip over me.

Think about ways that you might have been rejected, not for anything you did “wrong,” but for something that altered the nature of the relationship.

If you can view the ending in a way that empowers you, even a little bit, it can really ease your pain.

4. Remember you are still whole.

The feeling of rejection is greatly fuelled by the beautiful, romantic idea that two people “complete” each other. The conclusion is quite demoralizing; are we are no longer complete because someone doesn’t want us? What is our role in life now that we are not required to complete the other person?

Losing a partner is painful and the grief of loss is real, but the pain is heightened and prolonged unnecessarily when we believe that we have been rejected by “the other half of ourselves.” It can feel like life has no purpose or meaning anymore. When I began to accept that I was still whole and valuable, it took away the feeling of despair that I was somehow diminished and “less than” because my husband had decided to walk away.

I love using gratitude as a tool for helping to shift into a more positive state of mind. Admittedly, in the early days of grieving, it’s not easy to feel grateful for anything at all, so I found it easier to start with making a list each day of the small blessings in my life—the day-to-day things we usually take for granted. I really recommend this as a practice.

As your mindset starts to shift, you will come to realize that there are genuine reasons to be grateful that you were rejected. Mine included:

A heart broken by rejection can be a perfect example of a blessing in disguise. The best way to move forward is to allow yourself to feel the pain, then go on to reframe the loss as an opportunity. Trust that the right things will start to come!

Marissa Walter is a counsellor, coach and author of Break Up and Shine. Her 30 day online programme Stop Focusing On Your Ex  helps transform the way you think and feel in order to move on from break-up and divorce. Visit her website Break Up and Shine for inspirational blog posts, free resources and details of 1:1 support for healing from heartbreak. You can also follow Marissa in her free Facebook group and on Instagram.