Free Up Your Space: Two Simple Questions for Easy Decluttering
By Kelly Ramsdell 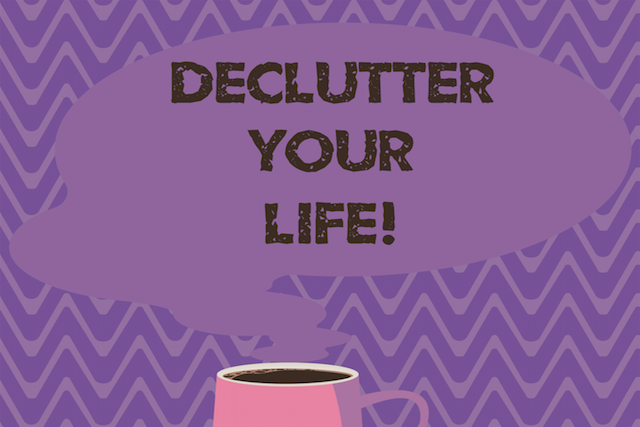 There are lots of reasons to declutter—to free up space, to pare down belongings in advance of a move, to release any possessions that weigh you down emotionally, and to make room for new things to come into your life. And there’s another reason, though people don’t usually realize it: to reduce stress and overwhelm.

The more stuff you have, the more time, energy, and money you need to devote to maintaining it, and the more likely you feel anxious in your cramped and potentially disorganized space.

I declutter two to three times a year now, but my biggest decluttering was the one I did five years ago prior to moving in with the man who is now my husband.

We each owned fully furnished three-bedroom houses. After much negotiation, we had decided to sell my split-level house and keep his rancher.

My first step was to create two wee signs for myself. Both read, “Official Policy: Get rid of anything that does not bring pleasure, beauty, or purpose into my life.” On days when I became a bit muddled, those signs helped.

My second step was realizing that there really are only two options when decluttering: “keep” or “get rid of.” There are, however, subsets to each of those categories.

For “keep,” you must decide whether it’s being kept in storage of some sort (and what that might be—attic/basement/garage or rented storage space—or incorporated into your space.

For “get rid of,” you have to decide whether it’s going to a specific person, being donated somewhere (and, if so, where), being sold, or being thrown out.

Having worked into the “whats” of decision-making, I figured it might make sense to talk a bit about how to make these sorts of decisions, since it’s the rare person who is going to decide based solely on “what I like best” or “what fits in my new place.”

One of the things my sweetheart and I did was decide what we were going to keep based on what we called a “must have” list.

For each room, we decided what items we must have for the room to function properly. For our master bedroom, we decided we needed a bed, two nightstands, a TV stand with a TV, and one dresser.

Once we had our list together, we focused solely on our necessities and figured out which items from where we were going to use to fill those needs. Only after we made those decisions did we add extras (like, say art for the walls, candlesticks, and the part of my hoard of crafting supplies that I kept).

Making the list was simple. Deciding whose stuff got to fill the role of “dining table” or “dresser” or “bed” was a bit less simple, but we worked through it with love and dogged persistence.

Here’s what I learned after decluttering and downsizing two full homes to merge them into one: You really only have to ask yourself two key questions:

1. Do you love each object that you are considering?

2. Do you use the object in question?

You can actually start these in either order, because every single item has to jump through both hoops.

You really ought to. Because life is too short to be surrounded by things you dislike or that you find oppressive to your spirit.

If you despise an item, why would you want to keep it? (And yeah, I get “familial guilt” and all, but still. if you don’t have space in your new place and you don’t like it, this is the sort of stuff that you should be thinking of liberating, in hopes it will find someone who really does like it.)

For clothing, optimally you should love the color, the style, the fit, and the way you feel in it, but realistically, I go with “what I like and wear and don’t mind being seen in.”

For items, it means you should enjoy seeing them or using them. It’s kind of hard to love a can opener, but say you have two, and one hurts your hand and the other doesn’t, it’s pretty easy to decide you love the pain-free one. (If you have two and they both hurt your hand, which happened to me, then do what I did and get rid of them both!)

And for items you’re keeping for nostalgia, a box of letters from an ex, for example, you’ll have to dig deep and be honest with yourself about whether this actually serves you, or just drags you down. You may have loved them in the past, but is it self-loving to hold on to them?

If you’ve asked yourself if you love something, or if you at least don’t dislike it, you still have to proceed to the next question:

For clothing, this means “Do you wear it?” And not in an “ever in life” way, but in a “within the past twelve months” way.

If not, you probably ought to let it go, although I do believe in making the very occasional exception for this category as long as you have the storage space. That last caveat is very important.

If you are crowding all of your stuff in order to keep a bunch of “maybe/just in case/but I can’t get rid of that dress/sweater/coat” items, then you are making every single day of your life harder than it needs to be. Because when your stuff is jam-packed, you can’t readily get to the stuff that fits, and that you wear.

For every other usable item in the house, the same “within the past twelve months” rule applies. Possibly you only use that huge platter for turkey on Thanksgiving, and that’s cool—when next Thanksgiving comes, you’re still going to need it.

If there’s “stuff,” though, that you haven’t used in ages, then you aren’t using it, and it’s a prime candidate for going. This was true, for example, of the ice cream machine I got rid of. On the one hand, it had been in the house for about thirteen years, so it was old; on the other hand, it had never been used—not even once—so it was brand new.

As for stuff that has no practical purpose, like décor items, some people might think those are non-essentials, or are somehow non-functional. The purpose that they serve is to decorate your space and bring joy into your life. If they are something that brightens your life, and both you and your partner love it and have space to display or store it, you should keep it.

Lastly, this tip from Yoda (sort of):

Lots of decluttering gurus advocate creating a “maybe” pile for things that you can’t make an immediate decision about. I chose not to allow for it when we were downsizing as well as decluttering.

The reason I chose not to use a “maybe” pile is because if you say “maybe,” you are essentially making a decision now to make the decision later, which isn’t really solving anything.

It’s kind of like the advice when sorting through mail to not handle things twice if you can avoid it. If it’s trash/recycling, put it there right away, so you don’t have to go through the mail again later; if it’s filing, file it. So I opted as much as possible for immediate “keep” or “get rid of.”

Five years on, there isn’t a thing we got rid of that my husband and I miss. There are, however, some things that we initially kept that we’ve since let go. Such is the way of decluttering.

3 Ways Decluttering Can Help You Accept Yourself