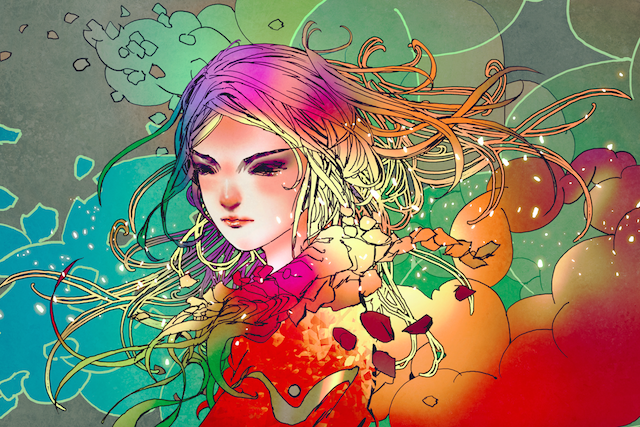 “Do not fight against pain; do not fight against irritation or jealousy. Embrace them with great tenderness, as though you were embracing a little baby. Your anger is yourself, and you should not be violent toward it. The same thing goes for all your emotions.” ~Thich Nhat Hanh

For a long time, heaviness and dark feelings were very familiar to me. In a strange way they were comforting; I felt safe in darkness. The light felt more painful to me, but I also wanted to change because I wanted to free myself from the limitations of staying in the dark.

I first started struggling with depression when I was young. From an early age my mother told me there was something wrong with me, particularly when I dared to express “negative” feelings, like anger. It became a mantra that filled my mind all the time. This one statement pervaded my entire life and dramatically affected the choices I made and didn’t make, well into adulthood.

In my early forties, after much searching, I hit rock bottom. I was lying in bed, wanting to die, my thoughts telling me how wrong I was as a human being, when another thought popped into my mind: “What if depression is a gift?”

Depression had felt like this never-ending darkness that clouded everything in my life. Even at times that I should have seen as positive, the depression prevented me from enjoying them. Depression was an old friend, one I not only tolerated but believed was the whole of who I was.

I found my identity in feeling like a failure, and not moving forward meant that my identity was correct; I was confirming that this was who I was—until I understood that I was meant to be so much more than this depressed woman, sad, sorrowful, constantly grieving and frustrated. There had to be more to life.

Instead of looking at what was wrong with myself, I started looking at the feelings that came up, noticing that my aversion to them was not only perpetuating them, but was affirming that I was not worthy of love, acceptance, or even acknowledgement.

I could no longer fight who I was. I had to start looking at myself as a whole, including the pain and trauma, so I started to imagine that my repressed emotions were small children—and not just any small children, but orphans.

They lived in a large orphanage, where nobody cared for them and the only adults that came in to see them were mean, critical ones who would beat them if they showed anger or leave them to cry if they were sad.

There were many children in there, cowering in their cribs, with no one to hold them or reassure them that they were safe.

Some of my “orphaned children” were shame and embarrassment. I’d felt these feelings many times in my life, and they’d prevented me from sharing my skills or even recognizing that I had any at all.

I also had angry orphaned children who had been made to believe that anger was negative and bad, not positive fuel for creativity and healthy boundaries.

And then there were my sad orphaned children, who had not properly grieved the loss of their father, who’d passed in my late twenties.

These parts of me didn’t need to be alienated; they needed my love, care, and attention.

I’d orphaned these feelings because I didn’t want them to be part of me, but because of this, I lived a half-life for a long time. Rejecting my feelings, ironically, fueled my depression, because you can’t selectively numb your emotions. When you numb any, you numb all.

Instead of embracing these suffering children, I’d created diversions to avoid them.

As a child, I used food to avoid feeling lonely, rejected, and broken. In my teens and early twenties, I was a binge drinker, consuming huge amounts of alcohol four days a week to repress my emotions. As an adult, this meant too much coffee and sugar, or I overworked to avoid feeling anything.

At one point I used “positive thinking” to distract myself from these neglected aspects of myself. This was probably the most powerful distraction, because by thinking I needed to be grateful and happy all of the time, I was automatically rejecting all other emotions.

It was easier to pretend than to make friends with these aspects of myself.

I eventually realized that I couldn’t do this to myself anymore. I no longer wanted to lie or consider a huge part of my nature, my shadow, wrong.

Self-compassion and self-acceptance are so important if we are to be balanced human beings. If we are unable to acknowledge and accept the pain inside of ourselves, how can we ever expect that things will change? How can we be less judgmental of other people if we judge ourselves harshly most of the time?

Embracing pain isn’t easy. It takes courage and commitment to take this transformative path, to begin to reframe depression and other mental health issues as a gift, as an awakening, to help us return to who we really are, which is loving, kind, compassionate, and accepting.

Though the darkness had felt safe, I eventually realized that I was afraid of the light because it illuminated those dark corners where my orphaned emotions live.

It was time to stop fighting my feelings and give them a new home in my heart. Here’s how I did just that.

The first thing I had to do was to acknowledge that I had been avoiding my pain, and to accept that it was okay that I did this. If I beat myself up for deserting parts of myself for so long I’d just be putting further shame or blame into that orphanage.

I had to accept that sadness, fear, anger, and rage were healthy emotional experiences, sometimes necessary, and that I’d previously rejected these feelings as a way to protect myself until I was ready to face who I truly am.

If you’ve also abandoned your most wounded, fragile parts, decide to break the cycle now. Acknowledge what you did but also why, and have compassion for yourself.

2. Get to know your feelings.

Take the time to get to know these pain feelings, but do so as an unconditional mother would, without judgment, without needing to fix or make the feelings anything other than what they are. When sadness or sorrow comes up, take a quiet moment to witness this child within with loving attention.

3. Accept them as gifts.

Our feelings are not there to make our lives miserable; they’re there to show us what may not be working in our lives, or what needs to change.

When I accepted that depression was a gift, I began judging myself less harshly and embracing the feelings I’d repressed for so long. Essentially, I started accepting all of myself.

I’d gotten comfortable viewing myself as a failure, and I thought my unconventional life confirmed that’s what I was. I was living with my best friend who was in his seventies. I was single, poor in my eyes, and unattractive. I believed that because I didn’t have my life together in my forties—I didn’t have a home of my own, a partner, or a successful career—I wasn’t acceptable or enough as I was.

My depression was a sign that I needed to change how I viewed myself. This enabled me to see not only that I am enough as I am, but others are enough, exactly as they are right now.

Instead of stuffing down your depression, anxiety, shame, loneliness—or whatever emotion you’re tempted to resist—ask yourself: What message is it trying to send to me? What would I do differently in my life if I listened to this emotion instead of suppressing it?

When I first started owning my shadow I found it challenging to stop my avoidance practices, but I initially tried to rush through this process. I thought I could immediately accept all feelings, whenever they arose, without ever giving in to my old habits.

I eventually realized I had to be kind to myself and to take each new step as mindfully as possible. I also had to understand that I would probably fall back into old habits at times and accept this was all part of the healing process.

It takes regular practice and persistence to welcome those unwanted emotions time and time again. It takes time to internalize that it’s not about getting rid of any feelings, but about welcoming them as part of self-love and personal growth.

Becoming aware of our painful emotions is only one step. Until we are able to fully welcome and embrace them, life will trigger us to love them further. Things will happen that evoke all the feelings we want to avoid—challenges in our work, relationships, and other aspects of our lives.

We can turn back and ignore the triggers, or we can trust that whatever shows up is meant to teach us unconditional love. It takes faith and trust to love shame, anger, and fear. We need to trust that this is worthwhile and that we’re capable of re-parenting ourselves in a more wholesome way.

I know that my old ways of avoiding and distracting myself from the pain never worked—that I had to go through it to go beyond it, and that going beyond it does not mean I will never feel sad or despairing again. I will, but I can do so from a place of trust, knowing I will be okay, because I now understand that all of me is lovable, and I am enough exactly as I am right now.

Kelly Martin is the author of When Everyone Shines But You, a mental health blogger, podcaster "Kelly Martin Speaks" and radio producer of the new mental health and music station Peace Within Radio. Kelly is on a mission to help those suffering with depression, anxiety, and PTSD feel good enough exactly as they are. Visit her on Facebook / Twitter.