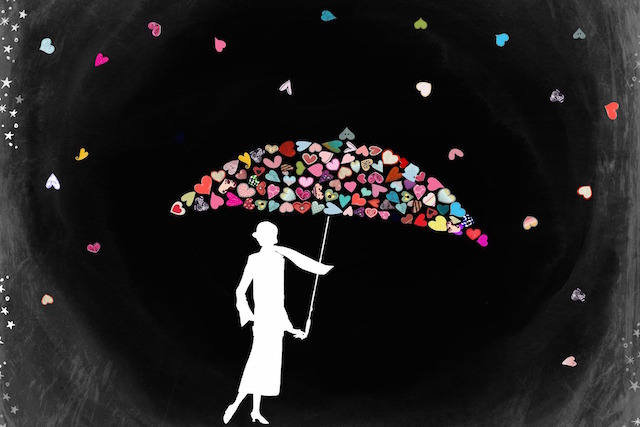 “You may be deceived if you trust too much, but you’ll live in torment if you don’t trust enough.” ~Frank Crane

I’m heading home with a latte in hand, listening to This American Life through my headphones when a woman sitting on a bench outside the café waves me down. She looks like she’s in her sixties with grayish brown bangs and a worn pink winter jacket. I pull my headphones out of my ears.

“Excuse me, can you tell me how far it is from here to 77 Westwood?” she asks. I take my phone out, Google map the address, and see that it’s thirty-seven minutes away in the suburbs.

“Aw, shit,” she mumbles. Spit collects at the corner of her mouth. Her teeth are yellowed and I wonder if she’s a smoker.

“What’s wrong? Where do you have to be?” My eyes rest on two leg braces leaning on the bench beside her that I hadn’t noticed before.

“My handicap transport cancelled on me at the last minute and you have to book those things like three or four days in advance, so now I’m stuck here and I need to get home.”

I ask if there is anyone that can pick her up. She shakes her head and proceeds to ask me, “How come people can be so mean?”

Apparently the person she asked for help right before me had sworn at her and told her to leave him alone, which shook up whatever faith she had in humanity.

With a heavy heart, she asks me questions I am not sure I have answers to like, why don’t people have more compassion? I can feel my heart inching out toward her. She has spoken to something in me that feels compelled to reassure her that not everyone is cold and heartless. There are good people in this world and it is important that she knows that.

Pointing to her legs she says, “This could happen to anyone.” She recounts how she had an accident but would do anything if she could just walk again to get from the bench where we were to the home where she longed to get back to.

In the five minutes I stand beside her this is what I learn: She’s getting her PhD in Child Psychology at McGill. She once had a diplomatic passport because her father used to work for the Prime Minister. She traveled all around the world with her parents and lived in Japan for many years. She is half Greek and half eastern European.

“My grandmother used to make the best gefilte fish.” Because it turns out her grandmother used to cook for the Steinbergs­, a prominent Jewish family that founded grocery store chains in Quebec in the early 1900’s. At this point I take out my wallet and look at the two $20 bills lying in there side by side.

Whoever I encounter that day or whatever happens, I believe in some way I am led to them. So for whatever reason, this woman sitting outside the café was put in my path.

When I hand her the bills she takes my hands in hers, and they are warm and soft. “God bless you,” She says. I look into her pale blue, kind eyes and am reminded of my grandfather’s eyes. A survivor of the holocaust, he had eyes that were deep wells of untold pain and stories and kindness.

I’m happy to prove that there are good people out there, that the universe is a kind place.

She tells me I did a “mitzvah,” clearly familiar with Jewish vernacular. I ask her how to say thank you in Japanese and she proceeds to delight me with a few sentences. I say goodbye and head home to tell my husband Dan about the woman on the bench I just met.

The story could have ended there, but it’s what happened the following day that threw me off balance.

I was walking back from doing some errands when a woman caught my eye. She was sitting on a ledge outside the YMCA talking to another woman standing beside her. I positioned myself so that the sitting woman couldn’t see me, but I could still overhear their conversation. It went something like this.

“I’m sorry but my transport cancelled and I need to get home. Can you check on your phone how far it is?”

My heart dropped and I could feel my face getting hot. I stood there for a moment in shock watching as stranger after stranger continued to stop for her, wanting to help.

I went home and recounted the story to Dan. As I spoke, I felt my emotions transform from anger to utter confusion. I asked myself, was she really disabled? Was she really a student? What was true and what was just a story to pull at the hearts of strangers passing by? Did it even matter? I wasn’t sure.

Tears streamed down my cheeks as I spoke. I suddenly felt naïve and foolish. “How do I respond to those in need from now on?” I asked him. “How do I know who really needs my help? Do I close my heart in protection? Do I stop giving because maybe I’ll be fooled again? Do I confront her?”

Dan held me and assured me I didn’t have to close up. He told me that there was no harm in giving to her. I didn’t put myself in danger. I didn’t get pulled into a thousand dollar scam. I lost forty dollars to someone who probably needed it a lot more than I did, and maybe next time I wouldn’t be fooled again.

After sleeping on it, I realized that what angered me most was the feeling of being deceived. I hated feeling so vulnerable and pulled into someone’s story that I couldn’t distinguish truth from scam.

Every day in my work I hear my client’s stories of pain and struggle, and in order to empathize with them, a part of me needs to feel into that part of myself that they are struggling with. And what I realized was that, while I have a gift for empathy and a soft spot for people’s vulnerability, it can also be my kryptonite.

If I’m not aware of the shadow side of the innocent part of me that wants to be helpful, I can easily be taken advantage of.

The innocent is an archetype that we all have as children. We see it in every Disney movie when the film begins with a child, an orphan– someone who naively steps out alone into the forest to greet the animals without knowing who is a threat and who they can trust, which might lead them to befriend a wolf who lures them into the dark forest by pretending to be a grandmother who looks shockingly like a wolf.

The innocent is the part of us who is naturally open and trusts that people are who they say they are. It is the part of us that might give another chance to a date whose been treating the waitress poorly, or excuse the behavior of someone who serves our own interests. But maybe we should take Maya Angelou’s words to heart, “When people show you who they are, believe them.”

Once you know that you’ve been tricked, it’s natural to feel angry, and there is always the possibility of becoming cynical.

I could have gotten mad and, in the extreme case, called the cops on her, or I could have warned all the other strangers not to approach her because she was a liar and a swindler. It is far easier to react out of fear or injured pride and exact our revenge.

We promise ourselves we will never be swindled again—“Fool me once, shame on you; fool me twice, shame on me.” If we start to believe that everyone is motivated by self-interest or that everyone is out to get us, we risk closing our hearts instead of opening up to compassion.

What I learned was even after all that, the woman on the bench still deserved my compassion. I still had the privileged position of being able to walk away, come back home, and have dinner with my loving husband.

I had a choice whether to give to her at all. No one would be the wiser if I chose to walk away. But in practicing being a loving and compassionate person, I learned that I want to give without attachment to how it will be received and without expectation that I am owed something in return.

I can’t control how the money is spent once I choose to give it, and if I wanted to do that, I could have bought her a meal instead.

I don’t think it is my business to judge anyone else’s life and circumstances. Instead, I want to be able to give and let go, and walk away with my heart a little lighter. Let go of needing to hear a thank you. Let go of the gesture being appreciated. Let go of the attachment to a particular outcome. Let go of judgment. Let go of control.

I know that the only thing I can ever be in charge of is myself and my own response—my thoughts, my words, my actions, and the decision to show up every day and try and keep this heart of mine open when it is so much easier, and more tempting, to keep it closed.

Have you ever been deceived? Have you been more discerning since then? What’s helped you hold on to your compassion?

Fullness Coach and Pattern Disruptor Myrite Rotstein helps women stop filling up with food, people pleasing, and self-doubt and learn to fill themselves up from the inside out, so they can stop dimming their light and remember their ‘nuf'ness.’ She leads monthly Fullness Circles to help women elevate one another, speak their truth, and spark connection. Visit her at myriterotstein.com.

Why Someone Else’s Success Isn’t a Threat to Yours

How to Heal a Broken Heart Using Mindful Self-Compassion