How to Be Like a Tree: Still, Strong, and Uniquely Beautiful
By Meredith Walters 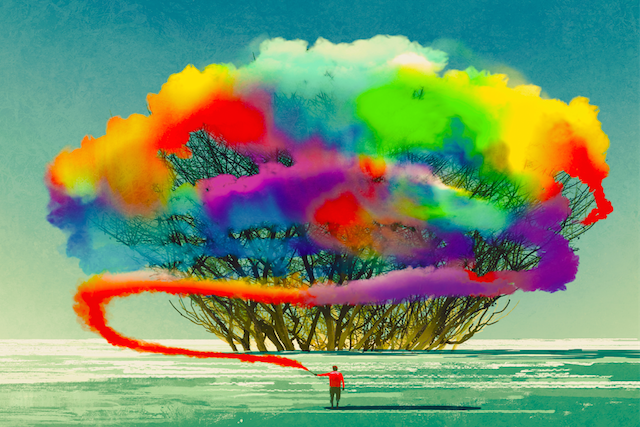 “This oak tree and me, we’re made of the same stuff.” ~Carl Sagan

I was hugging trees long before it was cool.

Recent research suggests that spending time in nature can reduce your blood pressure, heart rate, and stress level, not to mention cut down your risk of type II diabetes, cardiovascular disease, and premature death.

But when I began hugging trees, it was an undeniably weird thing to do.

I risked the odd looks of strangers, however, because trees felt so calm and welcoming to me. When I wrapped my arms around their broad trunks, it felt like I was being gathered into the protective embrace of a beloved elder, as if their steadfastness imparted strength, and their rootedness helped me find my own solid ground.

Recently, however, I’ve realized that their benefits extend far beyond momentary stress relief; it’s from trees that I’ve learned the most powerful lessons about how to deal with chronic depression and anxiety.

Here are the biggest and most unexpected things I’ve learned so far from trees:

Every time I hug a tree, I’m struck by how still it is. There’s a silence, a spaciousness, and a total lack of movement that boggles my mind.

I mean, it can’t be easy to be a tree. If you’re not getting enough sunlight, you can’t just pick up and walk a few steps to the right. If some animal builds its home too close to your roots, you can’t do anything to move it.

I, on the other hand, respond to any perceived threat by jumping into action. That’s the nature of my anxiety; when I’m afraid, I want to do something—anything.

But because I’m not acting out of clarity or wisdom, and because listening to fear makes the fear grow stronger, almost every action I take just makes things worse.

Like the time when I was anxious about leaving my therapist because I was about to move back to Atlanta after fifteen years away. Jumping into action, I decided to go off my anti-depressant medication before I left so I would have her help, but I did it at a time when I was also changing careers, starting a business, and getting ready to move cross-country. Needless to say, it made a difficult time even harder for me.

When I don’t get the results that I want, I feel even more out of control, my anxiety grows—along with my compulsion to act—and the negative cycle reinforces itself.

Trees show me how to break this cycle by demonstrating the value of not doing.

When I’m smart enough to imitate a tree, I get still. I feel. I listen.

When I do this for long enough, one of three things happens: Either the problem resolves itself, or a wise response becomes clear to me, or I realize that it wasn’t really a problem in the first place.

I’m often awed by how much trees give to the creatures around them, from the moss that grows on their bark, to the birds and squirrels they feed and shelter, to the humans who breathe their oxygen and enjoy their shade.

When I’m depressed and anxious, I usually feel both overwhelmed by my own misery and guilty that I don’t have the resources to give more to others.

It’s another negative cycle whereby my misery makes me unable to focus on anything or anybody else, which causes me to feel horribly self-centered, which makes me feel even more wretched and less able to give. What makes things even worse is that supporting others is one of the few things I’ve found that reliably helps me feel better.

The effortless generosity of trees offers a way out.

When trees have something to give, they share it with everyone, no matter how small or undeserving. But they don’t beat themselves up for not having acorns in the spring, or leaves in the winter. They simply extend whatever’s there to extend.

Sometimes all I have to give is an apology for not being more considerate. Other times it’s a smile, or appreciation for someone’s support. Over time, if I give what I have, I have more to give, but the key is never to believe that it should be more than it is.

That way, I can support all life, including my own.

I’ve never been one to take up too much space.

I’m talking physically: I’m over six feet tall and always felt awkward jutting up above most of the people around me, so I subconsciously slouched and made myself smaller.

But I’m talking emotionally and relationally as well: I never used to like to call attention to myself, ask for what I needed, or speak up about my opinions. I went out of my way not to negatively impact anybody else, even if that meant sacrificing my own happiness or well-being.

After years of always making other people’s needs and opinions more important than my own, it was hard not to feel depressed, helpless, and hopeless. By that point, however, making myself small wasn’t so much a choice as a well-ingrained habit.

When I began to hang out with trees more, I started to notice how unapologetic they are about the space that they take up. They don’t worry that growing tall will cause somebody else to feel inadequate, or that stretching their limbs out wider will mean they’re taking up too much room. They just are who they are. When I stood next to them, I could feel their expansiveness begin to bloom in my own chest.

Acting on this newfound sensation, I gave myself permission to get big. When I needed something, I asked for it. When I had an idea, I shared it. When I wanted something, I moved toward it. Not worrying about how others might perceive me, I stood tall and enjoyed the unique view.

The best part is, after a long time of feeling powerless over anxiety and depression, I finally saw that I was bigger than either of them.

4. Being crooked is beautiful.

I’ve made plenty of wrong turns in my life.

I used to feel ashamed that I had ten jobs over ten years before finally finding one that felt like a fit. Or that I had so many failed relationships before getting married nearly a decade after most of my friends. Or that fear made me wait twenty-five years to write a second novel when I knew after finishing my first at age twelve that I was born, in part, to write.

Most of us (including myself) tend to think that the straight path is the best one. We beat up on ourselves for our false starts and slow progress.

But have you ever noticed how beautiful trees are? And how crooked?

I’ve come to believe that it’s precisely because of their odd angles and unexpected curves that trees appear so graceful. A tree made of straight lines would hold no appeal.

Looking back, I can see that every job I had taught me more about what I wanted and brought me one step closer to work that I loved. Every relationship prepared me in some small way to be with the man I would eventually marry. And every time I negated my desire to write, that desire grew stronger, and I had more material to work with once I finally was ready to say yes to the call.

We can’t undo our wrong turns, but we can appreciate their gnarled beauty.

When I was younger, I thought that it was what I did that made me worthy. I pushed myself hard to do well in school, excel in sports, and achieve as much as I could.

Eventually that strategy led to an unsavory mix of perfectionism, anxiety, and depression. Desperate, I got help from others and re-evaluated my beliefs. I soon concluded that it wasn’t what I did but who I was that mattered.

At first this new belief seemed helpful, but eventually it brought its own set of anxieties. I was trying my hardest, but was I really calm enough? Or kind enough? Or wise enough?

Then one day when I was hugging a tree, I tapped into a truth that made such questions irrelevant.

I’d just gotten curious about what a tree’s energy felt like. Opening up to it, I was immediately flooded by a sense of expansive serenity. Peaceful as it was, it was also vibrant and strong. Welcoming and warm, it pulled me in. Suddenly I felt as if I were filled with, made of, and surrounded by sunlight.

The energy was coming from the tree, but I realized that I could feel it because it was stirring something already within me. In other words, the tree and I shared the same true nature. Beneath my body, beneath my personality, and beneath my small identifications, I am this beautiful energy. So are you. So are we all.

Unified in this way with every other living thing in the world, even I have to admit that the idea of being unworthy doesn’t make any sense. It’s not only irrelevant; it’s impossible.

That’s when I realized that the magic lies not in what we do or even who we are, but in what we are, and how often we remember that.

Being Happy in the Present: See the Tree

4 Lessons from the Forest on Dealing with Difficult Times