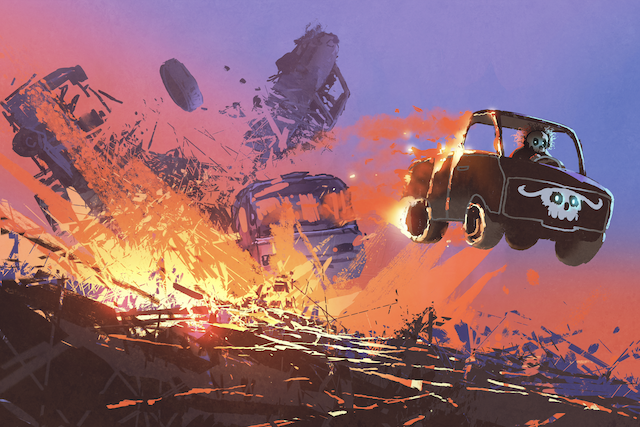 As a Lyft driver, I once spent significant time out on the road—a setting rife with provocations and stressors.

Driving can feel like a constant challenge to employ mindfulness instead of giving way to destructive emotions like impatience and frustration. Meditation can be difficult to practice when you’re navigating a vehicle (demanding as both activities are of your full attention)—try channeling all your senses into it, and you’ll likely plow over a pedestrian or end with your car in a ditch.

Navigating the road mindfully, though, doesn’t have to mean closing your eyes or adopting any of the other classic “meditative” stances. I think it involves something simpler: momentary detachment—both from everything that’s happening around you and from your own internal reactions as you watch from an ever so slight distance while they ebb and flow.

Here’s some of what I’ve learned about maintaining equanimity when out there on the stress-inducing road.

The importance of keeping in mind that sometimes there’s something we’re not seeing.

Driving down Market Street through downtown SF, I once noticed a number of pedestrians stopped inside the crosswalk in the middle of the street. They didn’t have the right of way; the light was red for them and green for us drivers who were trying to get through. Cars were honking.

For maybe a second my impulse was to add to the honk melee. Then I took a closer look and saw what was actually going on: a lady had dropped her bags, causing their contents to spill to the pavement. The people in the street were passersby who had run to help her pick them up.

Once they were finished, I noticed how they stood and raised their hands in apologetic gestures [to the perturbed honkers] that seemed to say both “Just wait one minute please” and “Sorry, sorry, sorry.”

Witnessing this got me thinking about how often in this fast-paced world we jump to reactivity before even understanding what’s going on first. We’re especially primed to do this out on the road, I think.

As Shankar Vedantam said on his podcast Hidden Brain, “This woman didn’t bump into you maliciously; she’s blind. This soldier standing in formation didn’t pass out because he doesn’t have what it takes; he’s diabetic and needs his insulin. This woman isn’t heartless because she didn’t help the elderly person who had fallen; she’s paralyzed from a spinal cord injury.”

Often in life, crucial pieces of a larger whole are unavailable to us—yet sometimes we act or respond as if under the assumption that we have access to all of them.

Particularly when a driver in front of me is moving very slowly, or randomly stops, I sometimes feel the impulse to honk. I wonder why they’re being “so inconsiderate.” I ask them, in my head, if they’ve forgotten where the gas pedal is located. My immediate instinct is to cast blame on whoever’s holding me up.

Yet I have to remind myself that I’m missing information. Maybe the driver in front of me is stopping to let someone cross the street. Maybe there’s a red light in front of us that I can’t see. Maybe… [insert any other number of possibilities here].

I can’t see any of that though.

I’ve also been on the receiving end; for instance when I stop to let a baby animal cross the road. Unable to see the road-obstructing animal, the cars behind me get annoyed and honk their disapproval.

Willingness to admit when I am wrong (similar to the point above).

Once when driving home across the Richmond Bridge, I thought there were only two lanes, which led me to assume that the guy next to me was cheating by driving along the shoulder.

In response, my mind wove an entire narrative involving an entitled driver that does whatever he wants—weaves in and out, causing near collisions; uses the shoulder as his own lane, so that he can accelerate past the mass of stopped cars before cheating his way back into the pack once he’s gained a clear edge.

To the driver he has endangered [through this behavior], who has responded by honking, he says, “Why don’t they just chill out?”

I pictured the people out there who engage in similar behavior when not in their cars. The ones with blinders on to their own actions, who maybe call out others for “being too sensitive” while refusing to acknowledge their contribution to eliciting this supposedly sensitive response from them.

Outraged, I honked at the driver—yet he kept driving along the “shoulder.” I shot him a look of disbelief; he didn’t look back. He seemed to not have even registered that my honk was directed toward him.

That’s when I realized why: the “shoulder” was actually a legitimate lane.

Remembering I’ve been wrong in the past helps me practice equanimity when I’m tempted to get outraged on the road.

I think about those cars that get stranded in the middle of the intersection during high-traffic hours—usually because the light turned red when they were halfway through it. I think about how the cars around them often unleash an ambush of honks to signal their disapproval.

I say this to myself when I’m about to become an angry honker: The trapped driver made a mistake. He or she is probably already aware. Your honk won’t teach him something he doesn’t already know.

I realize that all my honk would have added was more noise to an already overly raucous road, compounding the driver’s shame while maintaining my own stress and self-righteousness.

On somewhat of a side note, I’ve noticed how at times the most reckless drivers can also be some of the most intolerant of other drivers’ mistakes. One time a man who’d been driving eighty on a commercial street seemed very disgruntled when I changed into his lane (even though my doing this wouldn’t have been a “near miss” to someone who’d been following the speed limit).

First he slammed the brakes. Then he wove theatrically around me into the lane next to us. From there he proceeded to change lanes three more times in the course of one block, dodging cars like they were opponents in a high-speed chase video game.

If we can remember we all make mistakes, it will be easier to offer other drivers grace.

Practice gratitude. When you do have a smooth ride, acknowledge it to yourself. Hold onto that moment and remember how it felt.

A metaphor comes to mind each time I drive over a trafficless bay bridge (which happens very rarely but when it does, feels magical). Cruising over the smooth pavement without a car in sight conjures a wintery, white Christmas feeling.

This calming and cleansing sight contrasts starkly with the default state of the freeway: normally a long stretch of cars, constant reminders of overpopulation and limited resources. It feels similar to gliding down a ski slope when the snow is fresh, pristine, newly plowed, and un-scuffed by other skiers.

I made a note to be grateful for it.

Even machines like Siri can be recipient to your gratitude. When traffic clogs the freeway, for example, I appreciate how she escorts me onto an alternative route. On one, we drove down bucolic side roads past fields of sunflowers while country music played from my car speakers (and bugs splattered against the windshield). On another, a river gushed a few feet away from us, providing a peaceful backdrop both visually and auditorily.

Don’t force it, but when a moment that might be worthy of some gratitude does present itself, register it (even if it’s extended toward an inanimate object). Acknowledge it, if only to yourself.

Humanize the other drivers around you.

I think part of what exacerbates and heightens road rage is the ease with which we’re able to dehumanize the drivers we’re sharing the road with because we see cars first, people second. Attuning to certain visual cues, though, can reinstate a human component.

I’ve found that making eye contact with another driver can at times quell any road rage that’s starting to bubble on my end. Other little things, like keeping my corgi stuffed animal visible, also help (when drivers get mad, the sight may calm them).

One time when driving, I came upon a car stopped in the middle of the road. Just as I was about to get annoyed at the hindrance, a little Latino boy eating an apricot stuck his head out the car window. Juice dribbled down his chin while he waited for his dad to fix their car (which was why they were stopped). The innocent sight instantly calmed me. It was almost Hallmark-card level of sweet and centering.

Another “tempering” visual cue: when a dog sticks its head out the window to feel the breeze against its face. Irritation was beginning to mount one day when I saw them: those big, brown eyes—opened wide, earnest, and slightly damp—shining above a golden snout in the back window.

Once again I was calmed, my anxiety diffused by our eye contact—reminded that we’re are all flesh and bone, even when stress pushes us to reduce each other to the metal contraptions we cart ourselves around inside of.

Take your time, Sir. I’m just going to have a moment with your sweet fur baby in the meantime, if that’s okay…

In the absence of visual cues, use your imagination.

Whenever I start to feel impatient with the slow driver in front of me, but I can’t see their face (or no other visual cues are present to temper the impatience), I take a deep breath. Then I gently counsel myself to envision the human inside the car.

The specifics of whichever person pops into my head don’t really matter. What matters is that I recognize their humanity and extend patience toward whoever does.

If that doesn’t work, try picturing one of your family members. What if the driver was your uncle, or your kind elderly neighbor, or your mom? Use your imagination to see inside the 2,000 pound metal machine that’s obstructing your path. Draw features onto the faceless foe inside it. De-objectify its operator.

Driving and traffic can be stressful and draining. During the times when it feels like the surrounding cars and I are basically just crawling to our destination, I feel like I might as well be outside the car, pulling it with a rope—at least that way I’d get some exercise and Vitamin D.

Sometimes I wish someone would invent a car feature that would allow the driver to switch to “pedal mode.” It’d be a great way to release endorphins through exercise (thereby reducing stress levels) during these inherently stressful situations.

Until those innovations get brought into existence, though, we can work on controlling our own internal responses to whatever external road frustrations come our way.

Dealing with Other People’s Road Rage & Letting Go of Anger