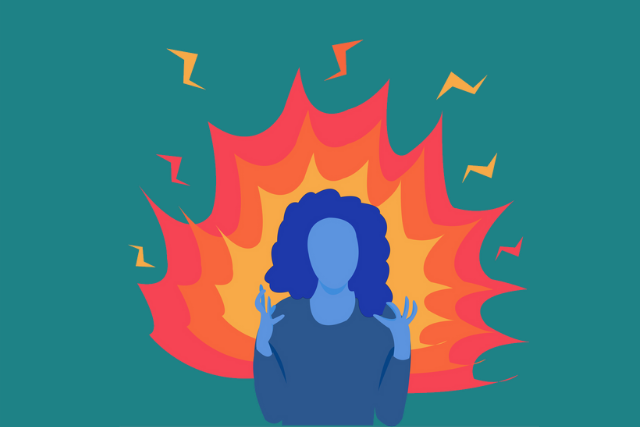 “Freedom is taking control of the rudder of your life.” ~Yukito Kishiro

“What’s for dinner?” It’s a simple enough question. Yet it’s one that has made me lose my mind at my husband on more than one (or ten or twenty) occasions.

It’s not the question itself. It’s a valid question and one that needs an answer (at least by one of us).

A trigger of mine is being asked to answer a question when I’m already in the middle of something, feeling overwhelmed, emotionally exhausted, or just sick of answering questions.

So then I snap and overreact.

I’ve come a long way in my personal growth journey, but I’m by no means perfect. I still react in anger but to a lesser extent and less often. I get mad, but I don’t stay there. I screw up, but I can apologize with humility and forgive myself.

When we’re in reaction-mode to life’s challenges, we aren’t in control. We react in ways that are not in tune with how we want to be.

Learning to navigate our triggers not only enables us to take back control and enjoy life more, it has an amazing trickle-down effect to those around us too. It better connects us in our relationships and models for others or our children what it looks like to be gracefully resilient so those in our circles can mimic the same.

So, what does it look like to react in anger?

Someone at work criticizes you and you instantly get defensive.

Your partner asks you to do something when you clearly have your hands full, so you immediately get pissed.

Plans change unexpectedly, and you panic or get irritated.

Someone in your life is controlling or manipulative, so you either get scared and shut down, or feel livid and lash out.

Someone does something that goes against your core values like being mean or inconsiderate or lying, and you explode.

It can also mean reacting to your own thoughts or actions and getting angry with yourself for “doing it again,” being lazy, or failing.

And all that leads to feeling guilty for saying things you don’t really mean or making a mountain out of a molehill, or maybe even rehashing past events.

It can lead you to beat yourself up again for how you handled things in the past.

And it can leave you feeling misunderstood because you recognize that your reaction stems from something deeper than this one incident;  a culmination of events, or some underlying fear created this trigger for you.

Why We Are Reactive in the First Place

We are reactive or over reactive when our stress response is triggered sending us into fight, flight, or freeze mode.

We react on autopilot. In this space, we aren’t in full control, and it’s hard to see things clearly and objectively.

Sometimes our triggers relate to events from the past. For example, you may get triggered when someone ignores you because your parents frequently neglected you when you were a kid, causing you to feel unimportant. Other times, our triggers are events that make us feel out of control.

For example, one of my triggers used to be slow drivers on the highway. I would instantly snap into fight mode and get angry. I’d drive too close to them or shake my fist (or special finger) at them, honk my horn, or speed past them in a fit of rage.

Sitting here calmly as I reflect back on my past, reactive self, I’m a little embarrassed and shocked remembering the actions I took while angry. That’s because I’m in a calm place and my fight mode is not initiated, so I have full control at the moment. I wouldn’t do any of those things when I’m in a healthy mental space—those choices don’t reflect the kind of person I want to be.

When we react from a place of fear and anger, we rarely feel good about the things we say and do.

We don’t have to let our fear and anger control us. At any time, we can make a choice to respond to life from a calmer place. Here’s how.

Prioritize self-care so you’re less likely to feel overwhelmed, exhausted, or on the verge of snapping.

If you overextend yourself or regularly neglect your needs, you’ll likely feel triggered by even minor annoyances because your default state will be imbalance and agitation. And you’ll find it nearly impossible to handle major issues because you won’t have the inner strength to handle them. Take good care of yourself, mentally, physically, and emotionally, and everything will feel more manageable.

Set yourself up to not be reactive by identifying your stress triggers.

What things lead you to react in anger or fear? Awareness is key here! Create a list of things that you know trigger you, and why.

Then describe how you typically react when those triggers occur.

For example, a trigger of mine has always been other people getting angry at little things that I don’t think warrant being angry about.

Funny enough, my reaction to their anger was anger! I would get mad that they are angry and yell at them to be calm. Obviously, this strategy didn’t work for me.

Then ask yourself, “How do I want to respond instead”?

As I reflected on how I usually reacted to my triggers, I realized I would rather remain composed than lose my cool and flip out. If I could pick any response to other people being angry, it would be for me to stay calm and in control.

And that’s one of the main reasons I realized I have such a strong reaction to other people’s anger. I think that the “right” way to be in this world is to be calm, kind, and compassionate. When someone reacts in the polar opposite way, it conflicts with my values, and ironically, I end up getting angry with them.

This is why this step is so important. We often react in ways that are not in tune with our values when emotions are running high, so we need to consciously decide, in advance, how we want to respond in stressful situations.

From there, think about what you are trying to control that you have no control over.

At a certain point, I realized that some people are going to get angry, and I won’t agree with their behavior. My anger stemmed from judging their reactions and wanting to control how they were feeling and behaving. I have no control over other people. I may be able to influence them, but I will never be able to control them.

Now, ask yourself, “What do I have control over?

Since I don’t have control over what other people do, and wanting to control them was creating anger within me, in order to reach my desired response of staying calm and in control I had to shift my focus to myself. Because the only thing I have control over is what I do.

So when someone else is angry and I think they’re overreacting, I can take some deep breaths, step away from the situation, and ask the other person how I can help (in an effort to help calm them), or just sit back and allow them to process the situation however they need to in that moment.

I started to notice that as I stopped reacting to anger with anger, the people around me showed less anger over time. And when they did get angry, they didn’t stay angry as long.

I started to realize that they were often mimicking me, whether they realized it or not. Of course, part of it was that I was no longer adding to the anger and fueling it from my end too. But seeing what it looks like to stay calm and in control is an important skill to witness. It shows others what it looks like so they can do the same.

We all get triggered at times, but we don’t have to say and do things we regret, which will ultimately damage our relationships and leave us feeling bad about ourselves. With a little self-awareness, we can stop reacting on autopilot and start responding to life from a calm, neutral place. Maybe not all the time, but more often than not, and we’ll feel a lot more peaceful and in control as a result!