Learning to Have Faith That All Is Well
By Jen Picicci 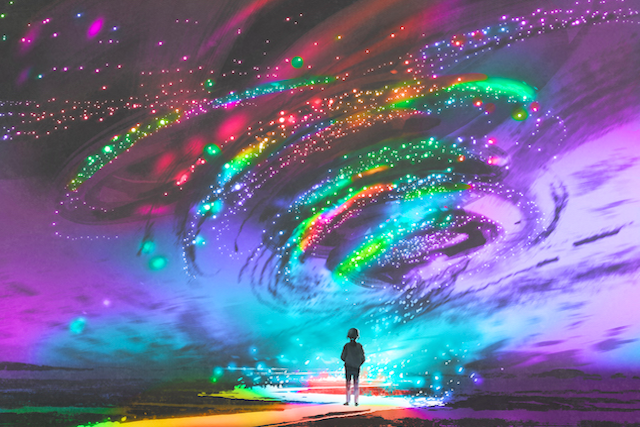 Gwen and I first met at a lactation group for new moms. She seemed like someone I’d get along with, and we talked here and there, eventually becoming Facebook friends, but nothing more.

Fate (or just good luck) intervened, though, when we met up again months later at the first birthday party of a mutual acquaintance’s daughter.

Gwen was the only person I knew at the party (other than the hostess, of course), and I was the only person she knew, so we started chatting. I was quickly reminded of how much I liked her, and after she told me she was desperate to hang out with someone other than her retired next door neighbor, we made a plan to meet up.

We clicked immediately. We talked parenting, politics, relationships, and more, and on a really deep, intimate level. I felt like I’d known her forever, and by the end of our first playdate she said something along the lines of, “I really like you and I’m so glad we had the chance to meet again!”

I felt so happy and full, and our relationship continued along this way for more than a year. Our kids were close in age, so we’d play at each other’s houses, meet at a playground, or do some sort of activity. One time we went away to a lake for a few nights and I had more fun (and talked more) than I’d had since I was a teenager.

Then things changed a little bit. We both got busier, and the fact that we lived about forty minutes away from one another made it challenging to hang out. Our visits dwindled to about once a month instead of once a week, though we were always happy to see each other.

A few months after this shift, we went more than a month without seeing each other. I had contacted her at one point, but she had said she wasn’t available on any of the days I was free.

Two more weeks passed and I heard nothing. Finally, with her birthday on the horizon, I texted her to say that it was weird not talking to her, and that I missed her. No response.

I texted a childhood friend, someone whom I’ve known for decades, and asked her what she thought I should do. She said Gwen was probably just busy, and I shouldn’t worry about it.

A couple of days later I sent another follow up text to Gwen, one that simply said “Hello?” and heard nothing once again.

I started to get really down whenever I thought about the situation. Even though we’d both been much busier lately, each taking on part-time jobs and working on side businesses of our own, I felt gloomy and worried. I thought we’d be friends for the long haul.

One night, while I was lying in bed, I talked to myself about just letting it go. Being mad wasn’t going to do anything, being hurt wasn’t going to help, and I’d done my best to reach out.

And then you know what? I woke up one day and there was a text from her.

It said, “Did you get my texts?? I think something is wrong with my phone, because I haven’t heard from you at all, but I just saw that all of your recent texts had gone to my iPad!” I immediately texted her back, and we realized the issue had to do with her getting a new phone a technological glitch.

We happily texted each other back and forth, me even telling her how I was wondering what the heck was going on, and quickly made plans for the next week.

When I went online later that same day, I saw she’d posted a message on my timeline that said something similar to her text: “I don’t think our texts are getting to each other, message me!”

Here’s what struck me when I read that: Gwen had faith. In herself, in our friendship, perhaps in life in general.

Why did I automatically assume she didn’t want to be friends with me anymore after she didn’t respond to just a couple of texts? Why didn’t I send her a message on Facebook? Why didn’t I try calling her? Why did I just give up?

I realized this was a pattern with me; I was often looking for the bad in things rather than the good. Looking for reasons why things wouldn’t work out rather than why they would. This was something I needed to change.

The incident with Gwen happened nearly two years ago now, and thinking back on it, I see how much I’ve changed and how much better my attitude is.

First of all, I’ve realized how much my thoughts and outlook impact every single area of my life. In this scenario, I could have told myself something kind instead of assuming the worst. I could have thought, “It’s been a long time, I bet Gwen misses seeing me, too!” instead of thinking she didn’t want to be friends anymore.

I had and have no control over someone else’s thoughts or actions, so even if it was true that Gwen didn’t want to have a friendship anymore, I could have looked for things to appreciate instead of automatically jumping to the bad.

Thinking about how thankful I was to have had the friendship when I really needed it while at home with a young child, or being appreciative of meeting someone I could talk to so easily, regardless of how long the relationship lasted, would have both been more beneficial stories to tell myself than the negative ones.

Second, I’ve developed more faith in myself and in life. I’ve often struggled to believe that things can work out, regardless of the area of my life I’m thinking about (career, relationships, finances), and focusing on what’s working rather than dwelling on the negative has made a big difference.

Sure, things can go wrong, but my deep sense of believing it’s going to be okay regardless of what’s happening in the moment has caused a big shift in my world. If the same thing happened today, I have confidence that I would tell myself, “All is well, and no matter how this works out, I can handle it.”

Third, I’ve worked on changing the “I’m not good enough” story that makes me question my worth as a human being. Talk about a recurring theme in my life! Whether I was stressed about my performance at work or worrying over a guy I liked, I often had the “not good enough” story on repeat in the background. This affected the Gwen situation in a big way, because I was letting myself believe I was somehow unworthy of our friendship and believing something was wrong with me.

This is still a work in progress, but I’ve come a long way. Catching myself when I have these thoughts is important, as well as reminding myself that it’s just something I’m making up, and humans all have similar thoughts. Getting stuck in them makes things worse; doing something positive for myself, like going for a walk or taking a nap, can make them better.

Lastly, I’ve tried to just stop worrying. About everything. Yes, that’s a tall order, and no, I’m not completely there yet, but being aware of my worry allows me to channel it into something else.

For instance, if I found myself worrying over my friendship status with someone now, I’d stop, take a step back, and ask myself if there’s anything I could take action on in that moment. If I decided yes, I’d take that action, whether it was picking up the phone or sending an email, but if I decided no, I’d be diligent about changing my focus to something else. Worry doesn’t solve anything, it only digs you into a deeper hole.

It can feel difficult to shift deeply ingrained thoughts and patterns, but when you realize they’re making your life harder and sadder than it needs to be, you’ll see they’re worth the work to change them.