How to Stop Worrying: 5 Things to Try When Nothing Else Works
By Meredith Walters 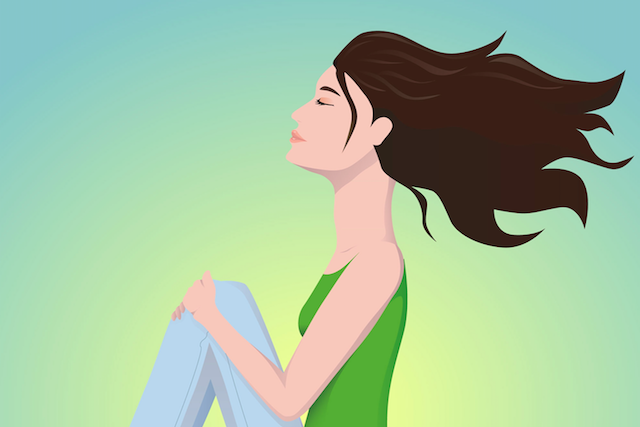 “I’ve been through some terrible things in my life, some of which actually happened.” ~Mark Twain

If you’re like me—a worry prodigy from a young age—you hate when people say, “Don’t worry about it.” As if it were so easy, as if I hadn’t already tried.

I’ve used many of the tips and tricks out there. Some of them helped for a while, but few did much for long.

The trouble is, most of the advice out there only addresses the symptoms of worry. It’s like taking cherry-flavored cough syrup when you have bronchitis: tempting, and probably the most palatable option, but not likely to do any lasting good since it doesn’t address the real issue.

I’ve been a worrier ever since I was seven years old and slept with my covers over my head because I was afraid that foxes and burglars would attack me at night.

What I’ve learned over the years of working with worry—a nice way to phrase it, though it could also be described as obsessively thinking, planning, and catastrophizing, forgetting to breathe, and grinding my teeth—is that resisting it only makes it grow stronger. In order to find freedom from apprehension, you have to get to its root.

So here are five things you can try if you’ve meditated, said your positive affirmations, and smelled your grapefruit (yes, it’s a thing) and your worries still haven’t gone away:

1. Get curious about why you worry.

As I got older, I began to notice what a big drain worry was on my time and energy. I saw how it never helped me feel stronger, more innovative, or more able to respond. I also began to read about all the negative impacts it has on our health and well-being. So naturally I started to worry about being worried.

A much better response would have been to get curious about why I did it. Because we all get something out of worrying or we wouldn’t do it.

In my case, I realized that I do it most when I feel powerless. The act of worrying helps me feel like I’m doing something, like I have some sort of control over an uncontrollable situation.

Worry can also distract us from even scarier parts of our lives, or from our own intense emotions. And it can help us feel like we’re protecting ourselves and what’s important to us just by thinking about them. Though worrying can’t actually change anything in reality, it can promise to help us feel more empowered and secure.

We worry because we think it helps. When we see what worry promises, we can also see clearly what it fails to deliver. Without this clarity, letting go of worries can feel too scary for most of us to attempt. With it, we can find new, more effective ways of dealing with uncertainty in a world where so much is out of our control.

In some ways, worrying is an attempt to avoid what you fear, which is really an effort to avoid fear itself. Feel the fear, and the worry becomes unnecessary.

I experienced this recently when I had the idea for a novel. For the first couple of months, everything was great. I kept getting ideas, writing them down, and feeling more and more excited about the project.

And then when I decided to actually start writing the novel, I had a breakdown. Suddenly I couldn’t stop thinking about the story line, going over and over it in my head, worrying that something was wrong with it, and trying to get it right.

Every spare moment I had, I was in my head trying to solve this imaginary problem. I couldn’t relax, I could barely sleep, and I certainly couldn’t write.

Finally it occurred to me that the reason I was worrying so much was because I was terrified. I experienced what felt like a huge rejection of my writing when I was young, and it devastated me. This was the first major project I had attempted since then, and part of me was scared that the same thing would happen all over again.

Once I became aware of it, I felt a tidal wave of fear waiting to wash over me. And though part of me wanted desperately to avoid it, I knew I needed to let it in. So I did.

It wasn’t pleasant. Fear can be very uncomfortable, and we avoid it for a reason.

But similar to storm clouds that look dark and sinister on the horizon, once the feeling actually arrived on my shores, it washed over me like rain. I was reminded that fear is really just a bundle of uncomfortable sensations that I can handle. And then it’s gone.

When you let yourself feel your fear of whatever outcome you’re trying to avoid, it loses its power over you.

The best way I know to do this is to name your fear, exactly what it is that frightens you. Then you can let yourself feel it, by sitting quietly, or dancing it out, or moving and noticing where you feel it in your body. If you can let it be there, knowing that it’s temporary and can’t harm you, you can free yourself from the need to distract yourself from it with worry.

Our worries are really just trying to help us. They can usually point us towards something worth paying attention to, so it’s worth listening to them.

You can do this by asking yourself:

In the case of my fears about writing a novel, I realized that the worry was trying to make sure that I wasn’t hurt or disappointed again. It wanted to protect me from possible rejection. It felt like my entire self-worth was at stake, that if I failed, I would know with certainty that I had nothing of value to offer the world.

The worry wanted me to protect myself. It wanted me to make sure that what I did was so good that it couldn’t possibly be unappreciated.

These realizations led me to do two things: first, I reminded the part of myself that was scared that though there will be people out there who don’t like what I write, there are a lot of others who will. Nothing appeals to everyone, and though disappointment hurts, it’s also temporary. Regardless, there’s always value in what I create from the heart, and my worthiness doesn’t depend on the result of one project.

And secondly, I committed to going slowly. Part of myself felt very scared, so rather than push myself out of my comfort zone all at once, I resolved to take baby steps and give my vulnerable self time to feel it out and adjust.

I also promised myself that I would only share it when I was ready, and would start with the people and communities who were most likely to appreciate it. When I did this, I no longer felt the need to obsess about the story.

Sometimes listening to worry’s hidden wisdom and taking action on its behalf is enough to convince it to lay down its arms.

This is easier said than done, but it’s one of the most powerful ways to undercut worry.

I had to do this big time when I made the decision to get married.

At the time, I was so worried about making a mistake that I could barely think about anything else. (And just to be clear, this had nothing to do with my lovely husband-to-be. I was so scared of committing at the time that I could have been dating Prince Charming and I still would have had doubts.)

It was only when I came to terms with the fact that our relationship might not last forever that I was able to stop worrying and take the plunge. Don’t get me wrong—I sincerely hope that we’re happy together ever after, but I also know that we may not be. And that’s fine. Splitting up would be painful, difficult, and sad—and I also know I would survive and ultimately be okay.

Many of the things we worry about (failure, rejection, embarrassment, inconvenience) are pretty much just temporary challenges when you get down to it.

But even for those things that are more painful or permanent, there is a way to accept them and know you’ll be okay. No matter what happens, you’ll have options for moving forward. Other people will always be there to help. And regardless of what goes wrong, you can count on all the incredible internal resources you have (compassion, loving-kindness, wisdom, strength, intelligence, resilience, humor, joy) being there to support you.

Being willing to accept anything isn’t easy, but it’s an incredibly powerful way to find more equanimity and peace.

The idea of trusting the universe used to give me a rash.

It seemed to me that it was hard work, foresight, and copious amounts of worry that held everything together in my life. I believed that if I relaxed at all, things would fall apart.

But eventually it dawned on me that as capable and amazing as I am, I do not single-handedly hold the world together. I began to notice how other people grow my food, trees create the oxygen I breathe, and the sun provides me with lots of light and warmth everyday, all without my involvement.

What’s more, I realized that if I’m being honest with myself, most of the good things in my life didn’t happen solely because of my own foresight or effort. Sure, I contributed to many of them, but they also required a lot of luck, happy accidents and coincidences, and forces outside of my control.

Recognizing this, I began to be willing to experiment with turning my troubles over to a force larger than myself. When held thrall in the throes of worry, I would remind myself that it wasn’t all up to me to make something happen.

I would recall all the help I’d ever gotten over the years and all the things that turned out well. I would think of all the things I was grateful for, most of which were out of my control, and then I would visualize placing my problem in the hands of a universe that had supported me so well up to that point.

And then I would do my best to let go and think about something else. (This is when meditation and other calming techniques worked really well.)

Much to my surprise, the world didn’t fall apart when I did this. In fact, the outcomes were often much better when I turned things over than when I tried to fix everything myself. Even better, the more I turned over, the calmer and freer I felt, and the more I began to trust.

Trust, it turns out, is the ultimate antidote to worry. And we don’t have to be born with it to use it—it’s possible to build trust in ourselves and the universe through practice, one worry at a time.

Why Enthusiasm Trumps Worrying When It Comes to Reaching Goals