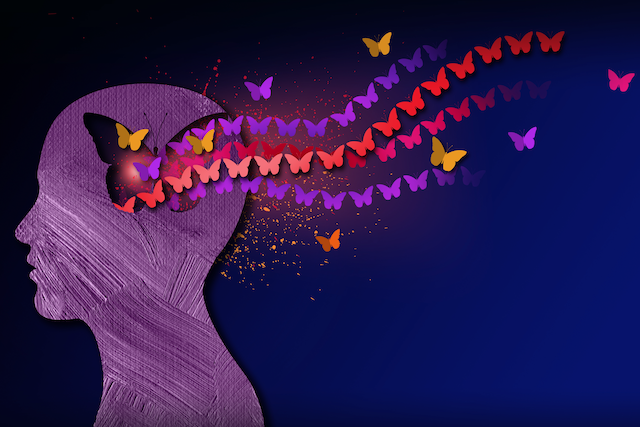 Just because you’ve believed something is true, even if you’ve believed it for a long period of time, that doesn’t mean that it is actually true or that it has to be true for the future.

For a long time I believed that my body was broken. I believed that I could never be super lean and ripped even though I really wanted to be. I also believed I had irreversible digestive issues that seemed to be getting worse and worse.

I spent a lot of time searching for answers because I believed that somebody out there somewhere had to have the cure to fix me.

Somebody had to know how to help me finally lose weight and gain the body of my dreams, the happiness I longed for, and the approval I so much needed but would never admit.

I bounced from one diet or self-help book to the next, reading one magazine after the other, Googling one “how to fix {insert ailment}” search topic after another, hunting for the key.

But then somewhere along the way I realized I didn’t want to do that anymore. I was tired of feeling broken, helpless, and sad. I started to question why I kept doing what I was doing.

It started to seem really silly to me because I wasn’t actually finding any of the answers I was seeking. In fact, I seemed to be just getting more confused than ever. I stopped searching for how to fix myself and instead began searching for the answer to a different question:

Why do I feel so broken?

Shifting my question led me on a whole new adventure where I finally recognized I wasn’t broken at all; in fact, my body had the ability to regain its balance on its own, which it did. The problem wasn’t my body, it was my beliefs—my limiting, disempowering beliefs.

You have learned everything that you know to be true through your life experiences, and those experiences have been shaped and guided by other often well-meaning people.

But here’s the thing: When you believe something is true, you tend to look for things that support those truths and ignore what does not. Beliefs become self-fulfilling prophecies in a sense.

You have to change your expectation.

It takes practice to change the way you think. You’ve had a lifetime to form the beliefs that you are currently living, so naturally it will take a bit of effort. But it can be done in a simple, pragmatic way.

Beliefs are just thoughts that you keep thinking, which keeps them active in your mind.

In order to change them, you must become aware of them and then shift them from the old belief to a new one, reinforcing it with lots of examples that show the new belief is true.

Here’s an example of an old belief that you might not want to believe anymore:

“I’m never going to be able to achieve the body of my dreams because I don’t have any willpower.”

And here’s a new believe that you would likely much rather believe:

“I absolutely can have the body of my dreams.”

In order to shift your belief from the old one to the new one, you must make a list of all of the reasons why the new belief is actually true. Often, it helps to start with general statements and then get progressively more specific.

1. You know, I’m really tired of feeling like a victim all the time.

2. I’m tired of telling myself that I can’t have what I want.

3. And I believe that the human body is capable of a lot of really amazing, often unexplainable things.

4. So if that is true, then I think that it’s feasible that I can achieve the body of my dreams.

5. And I think that this so-called willpower problem that everyone talks about is actually kind of silly.

6. What if willpower is not really a lack of control at all, but instead it’s a signal from my body that is telling me it wants comfort, and food is something that I’ve learned is comforting?

7. So, if that is true, then if I start taking better care of my body and I listen when it tells me that it needs rest or TLC, maybe it will stop asking for comfort through food.

8. And if that is the case, then willpower is really irrelevant to whether or not I can achieve the body of my dreams.

9. And I’ve done some pretty amazing things in my life, so if I decide that I want to achieve the body of my dreams, I think I can do that too.

Don’t you just feel fired up after reading that? Reality, especially related to your physical body, is only what it is because of your expectation.

When you begin to see how disempowering beliefs pull you away from living the life you want to live rather than help you to move toward it, it gets easier and easier to shed them and replace them with new empowering beliefs.

Sometimes just by realizing that a belief isn’t even your own—that it was passed down to you from someone else—is enough to disengage it.

So what disempowering beliefs do you have that you want to change?

What if you decided that you not longer believed that your genetics were causing you to be overweight?

Or maybe your limiting beliefs have to do with time. What if you decided you no longer believed you can’t make time to do the things you love?

Your past is not your present or your future. You have the ability right now to choose something different. You absolutely have the power to create a better life for yourself. That starts with changing what you choose to believe and what you expect for yourself.

Sheila Viers helps people break free from yo-yo dieting so that they can ROCK their dream body and feel amazing in their skin. She has been featured in Shape, Yahoo Health, and Livestrong, and was the CEO and Co-founder of premium fitness bag company, Live Well 360. Visit sheilaviers.com for more and follow her on Twitter, Facebook, and Instagram too!