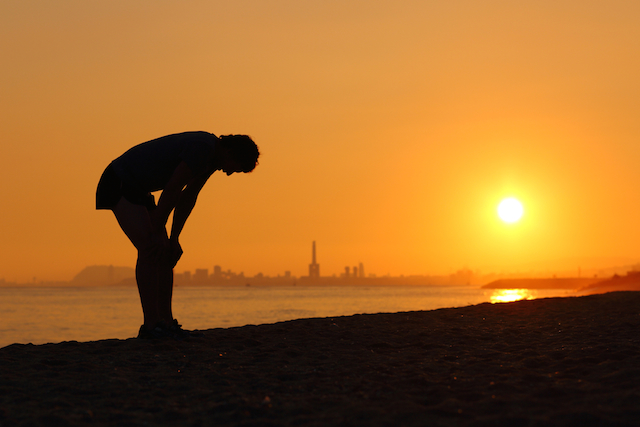 “The intensity of the pain depends on the degree of resistance to the present moment.” ~Eckhart Tolle

I was in pain.

My legs hurt, I felt nauseated, my heart thumped hard and fast, and I labored for every breath.

I was halfway up a steep, three-mile hill, and I was so exhausted I could barely keep my bike upright.

My mind tried desperately to solve this problem: “Should I stop? I should stop. No! I’ve done this hill in the past without stopping—what’s the problem this time? I hate this! Why is this so painful?”

I glanced over at my riding buddy, Keila. She was pedaling slowly and methodically. I couldn’t hear her breathing at all. Of course, it was hard to hear over my loud gasps.

I uttered an expletive.

I kept going. The road stayed the same, but I suffered more and more.

After twenty more minutes of cardiovascular hell, we reached the top of the hill.

I unclipped from my pedals and stood over my bike, elbows on the handlebar, head hanging as I tried to regain my breath.

In the middle of a wheeze I looked over at Keila. She was standing over her bike, too. But she was on her phone texting someone. No sign of struggle there.

After a few minutes, I was able to stand upright and Keila was done texting. We had climbed this hill together many times. Today had been a bad, bad day for me.

Still panting, I said to Keila, “That was awful. I wonder why it was so hard this time?”

A wise and observant young woman, Keila softly replied, “It’s because when you start to suffer, you speed up. And then you get mad.”

I looked at her for a moment and then, despite my still thudding heart, I laughed.

An experienced cyclist, Keila acted as my coach when I first started riding. One of the things she always had a hard time getting me to understand was how to pace myself, especially going uphill.

I had actually become fairly good at it, but today I had forgotten the lesson. Today, when I came to a very steep section of the challenging hill, I tried to speed up to make the pain stop.

But then I didn’t have enough energy for the rest of the climb and really struggled.

Out of fuel and suffering, I got angry and swore at the pain and myself.

After I recovered from the ride, I started thinking about what Keila said:

“When you start to suffer, you speed up. And then you get mad.”

I began to wonder if this manifested itself in my life off the bike, too.

It didn’t take long to see the pattern.

Inevitably, these “speed up maneuvers” backfired on me. I ended up regretting choices I made, cut off people I would have enjoyed keeping in my life, and lost myself in the process of getting the pain to stop.

But I also noticed that as I’ve aged and become more conscious of my speed up maneuvers, I’ve learned to pace myself more. To move more slowly and with greater awareness of my actions and their outcomes.

And I’ve learned that pacing myself doesn’t mean that it doesn’t hurt.

When I’m on my bike and climbing a hill, I still get to a point that I’m suffering no matter what I do.

But when I pace myself rather than try to outrace the pain, I have confidence that I can both tolerate the suffering and make it to the top of the hill.

So now, when I pace myself during life’s struggles, I don’t hold on to illusions that it’s not going to hurt in some way.

I have confidence in the knowledge that slowing down and moving forward with awareness will allow me to manage the suffering so that I can make it to the top of whatever emotional hill lies in front of me.

I encourage you to identify your speed up maneuvers.

What do you do when you’re suffering?

What are the ways you try to get the pain to stop that only drain your energy and cause you to struggle even more?

How can you pace yourself so that, even though moving forward may still hurt, you can make it to the top of the hill?

On our next ride, I told Keila about my insights that sprang from her quiet observation of my cycling struggles.

She laughed gently and said, “Everything that happens on the bike relates to what happens off the bike, Bobbi.”

Amen to that, Keila.

Psychotherapist Bobbi Emel specializes in helping people face life’s significant challenges and regain their resiliency. Download her free ebook, “Bounce Back! 5 keys to survive and thrive through life’s ups and downs.” You can find her blog at http://www.TheBounceBlog.com and follow her on Facebook (www.facebook.com/bobbiemel) and Twitter (@BobbiEmel.).

The Key to Helping a Person Who Is Depressed