Release Your Anger by Choosing to Lose
By Gaël Blanchemain 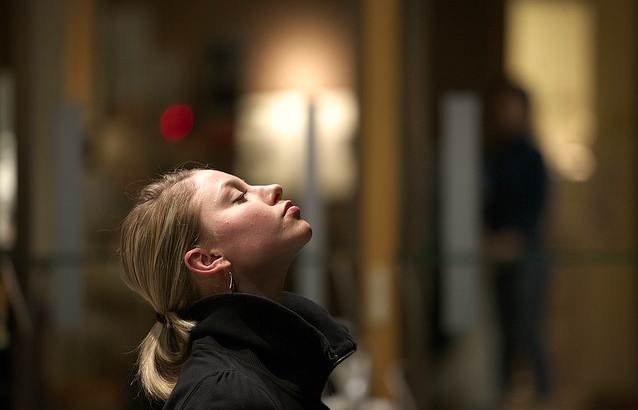 “Genuine forgiveness does not deny anger but faces it head-on.” ~Alice Miller

I was quietly watching a documentary with my wife when the phone rang. An icy voice informed me that I was supposed to be at work at 6:00; it was already 7:00 PM. It was my boss.

Great, that’s all I needed—an unexpected night shift with a resented supervisor.

In my worst mood, I jumped in my pants at quantum speed and then ran toward the train station on the other side of the street.

Although the road seemed clear, a car was approaching and the driver didn’t see me. Blame it on the text-and-drive trend. Things went in slow motion, the car wasn’t going to stop, and I was right in front of it. I heard a screeching noise.

The driver, a guy in his thirties, had managed to stop just in time. His face was livid with shock, and he apologized as much as a man’s pride can decently allow it. But adrenaline had gotten me too furious to listen, and there I was, cursing the hell out of a dude I didn’t even know, very close to starting a fight.

Sometimes you wonder where so many years of meditation have gone…

Fortunately, I woke up to my senses. My rational brain got back in control; what was I going to do anyway? The poor guy had apologized, I didn’t get hurt, and no real harm had been done. I decided to give up and let him go.

Now I was alone in the street. Alone, late for work, and still mad. And I only had thirty minutes to blow off steam before starting my shift. It was time to recall what I had learned about stress reduction.

I’d like to share the mindfulness tricks that I used that day to recover from this short burst of insanity. I hope they inspire those among you who unleash the dogs of anger a little too quickly, like me.

When angry, stop whatever you’re doing and fully open up to your sensations. Give yourself a minute to experience the physical buzz of anger—shaking hands, cold sweat, racing heart. Breathe deeply and bring your awareness down to each part of your body.

Don’t worry too much if you experience confusion; meeting face to face with the brutality of anger is confusing. The first seconds of doing this exercise will be awkward, yet you’ll regain balance faster than usual.

Learning to reconnect mind and body is the simplest way to pacify yourself. If you train that skill often enough, it becomes a sane instinct that brings you back to normal quickly.

Anger is a red comet leaving a trail of resentful thoughts. It often stirs up your own habitual rumination, and it’s easy to let it carry you away. Just remember that mental agitation is totally harmless as long as you don’t follow it.

Let thoughts go, don’t engage in the “How could he be so…?” or “I should have told him…” type of thoughts. The chatter can happen without you, in freewheeling mode.

Inner peace is not so much a matter of keeping your mind quiet; it’s about how comfortable you become with your own thoughts, regardless of how inappropriate they sound.

Witness the show anger is giving and let it vanish slowly. Once again, it can’t harm you if you don’t take part in it.

The Buddha said that compassion is the best antidote against anger, but ideally you want to verify that claim for yourself. Your own experience will speak louder than a teaching given centuries ago.

When you’re upset, practicing compassion means having the curiosity to watch your pain and the pain of those who made you angry.

In my case, it was easy to relate to the distress of someone who almost ran over a pedestrian, even if I was the pedestrian.

To put it simply: slip your feet in the other person’s shoes and imagine how it feels to be in their position. It’s probably the best way to dissolve hard feelings.

While we’re often advised to be “stronger than that,” the macho approach doesn’t work too well with anger.

Actually, anger intensifies when you try to dominate it. Your attempts at fighting aversion will strengthen it, so let it be.

And when I say let it be, I mean decide to lose the battle, surrender. It sounds obvious, but the key to serenity is to stop the struggle—including the struggle to feel peaceful.

I guess I should have started with that last piece of advice when scolding a car driver, on a nasty day. I’ll try to remember my own advice next time.

Gaël Blanchemain is on a mission to promote personal and collective evolution. A Buddhist Monk for 10 years, he now continuously explores new ways to grow and shares bite-sized transformation tips on his blog: http://www.gr0wing.com.