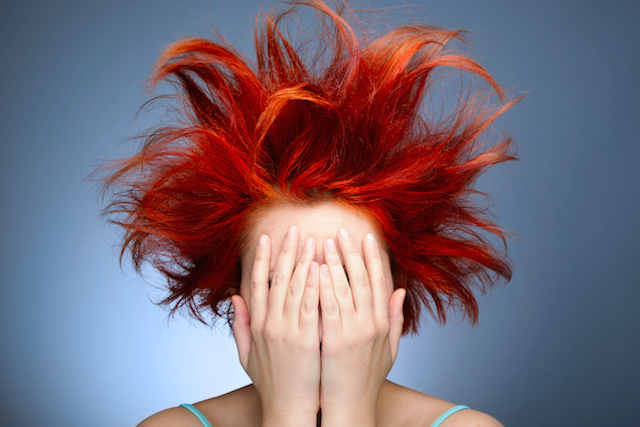 “To help yourself, you must be yourself.” ~Dave Pelzer

I spent a lot of my life being someone else. Playing the part of someone I didn’t fully recognize.

Looking back, there were lots of reasons why I avoided being me, my mum’s suicide being one of them.

Her death shaped me, like a rock in a tumbler, and my life, as I knew it, bore no resemblance to the one I once knew.

I was ashamed of being the girl whose mum left her in such a violent way. What would people think? Maybe that she didn’t love me enough to stay? That I didn’t do enough to help her? That I wasn’t enough of a daughter to her?

I started to believe that maybe I just wasn’t enough, period. That I was a bad person somehow. Because if you’re a bad person, people don’t want to be near you. They just up and leave. And that’s what she did.

When you don’t feel enough, there’s anywhere and everywhere you’d rather be than right there, with yourself.

I became a master at escaping myself and putting on an act in order to feel accepted. Accepted by people I believed would think things about me that I didn’t want them to think. I was too scared to let people see the real me because I believed the real me was so obviously fundamentally flawed.

My escape artist act was compounded aged twenty-one, when I realized that I was gay.

And so I pretended, again.

It’s hard, pretending to not be gay.

People ask questions and get curious. About why you don’t have a boyfriend. Or why you spend so much time with your friend, “You sure do see each other a lot. You’re practically joined at the hip, aren’t you?”

I spent a lot of time deflecting questions. My answers, which were always lies, became a shield that I hid behind.

And as my lies got bigger, I became smaller, crouching behind the shield until I couldn’t see over or around it anymore.

I had completely lost sight of who I was.

And losing sight of me was the emptiest, most isolating feeling I have ever experienced. It felt like I was living my life behind a glass screen, like I wasn’t quite there, unable to take anything in.

I was massively unsure of what I liked or didn’t like, and was scared to say what I thought. I mean, who was I to say? What did I know anyway? My thoughts and opinions felt lukewarm and grey. Not enough to add heat or a splash of color to a conversation.

I didn’t dare try new things. I stuck to the same routine. I avoided anything that challenged me, for being challenged would mean crawling out from behind the shield, and I would be too exposed—and this might mean that people would see the me I didn’t want them to see.

And we all do it, don’t we? In some part of your life right now is an area you’re avoiding. A place tucked away, deep down—a part of you that you don’t want other people to know about or see.

So you don’t talk about it, you draw attention away. By being the life and soul of the party, even though you’re not really laughing on the inside.

Or in your shiny, flash car that you drive faster than you should, because it’s the only way you ever feel truly alive.

Or in your relationships with others—where you spend so much time caring for them so you don’t have to care for yourself, and yet you feel the quiet resentment creeping up when they don’t empty the dishwasher or thank you for the dinner you made.

And yet the reason we so often don’t know who we are is because we’re not being who we are.

Over ten years later, I know this. And I see now how, bit-by-bit, and without realizing it at the time, I slowly came out from behind the shield that had protected me for so long.

The shield that had protected me from me.

“Figure out what you want from your life,” A friend advised. “Just get to know yourself.”

“Just do things. Anything!”

And so I did. There were no huge, adventurous leaps, nothing particular to write home about. I just allowed my curiosity, even if it was just a smidgen of curiosity, to lead me.

First up, I started to do things I’d never done before, like going to the cinema alone, or for lunch, with just a book for company. I read, vicariously, and mostly in the bath, mountains of self-development books.

In later months, I joined a barbershop harmony chorus (it didn’t last very long) and signed up for a five-kilometer race and started a blog which eventually became a website—a place where I could write openly about life, and being human.

And slowly, very slowly, my life started to show signs of color again, and I didn’t use the shield so much. All of the things that I was doing, the “Just doing things!” were where I discovered who I was.

We spend so much time looking outside of ourselves to find who we are, because it’s easier that way.

When we don’t have to put ourselves on the line, when we don’t have to say how we really feel, we get to avoid the things we, as humans, don’t find very comfortable. Things like conflict, having a hard conversation, asking for what we need or offending someone.

We get to avoid failing and messing up and risk. We get to avoid people not agreeing with us and our opinion, being different, being ‘weird.’ Being truly who we are.

And yet, we cannot truly know who we are without being who we are.

Only by being who we are can we experience connection—to life, to other people, and most importantly, to ourselves.

Liz Goodchild is a life coach. She helps people make their lives better. (Think: Getting unstuck, making decisions that feel good, and doing things they think they can't.) You can find Liz over on Facebook and her website.

How to Become Your Own Biggest Fan