Worrying About the Future: On Trusting in Uncertainty
By Lori Deschene 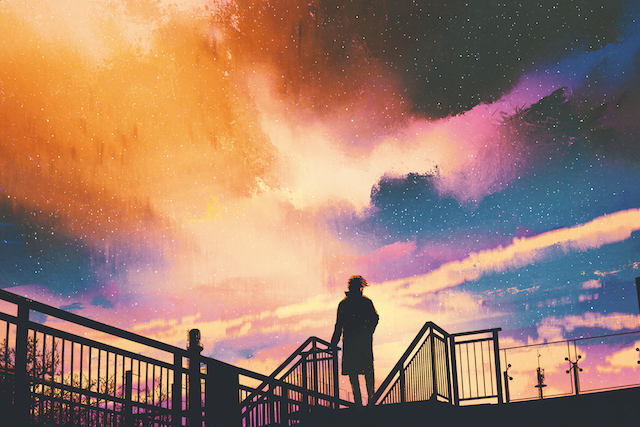 The other day my good friend from back home called me hysterically crying. She felt certain she just blew a second job interview, and she’d hit a breaking point.

She’d been struggling for months, just barely paying her bills and wondering if she could afford to keep her apartment.

Every purchase had become an exercise in extreme deliberation. In fact, I’m fairly certain that when I visited last, I saw her stressing in the grocery store about whether she really needed that box of Twinkies that beckoned from the shelf.

Now here she was, hyperventilating, recounting in explicit detail all the things she’d done wrong in this interview.

The interviewer looked disgusted, she said—he was probably thinking she was incompetent. He asked her questions in an abrupt way—he was trying to trip her up. He didn’t respond when she made conversation on the way to the door—he most likely hated her and couldn’t wait to get rid of her.

Having gone through countless interviews with multiple companies, after sending out dozens of resumes, she was just plain exhausted and starting to feel desperate.

As she recalled the anxiety she felt in this encounter, I visualized her sitting vulnerably in front of his desk, and my heart went out to her. I imagined she felt a lot like Tom Smykowski from Office Space when he was interviewing with the efficiency experts to save his job—before he invented the Jump-to-Conclusions mat.

“I deal with the goddamn customers so the engineers don’t have to! I have people skills! I am good at dealing with people! Can’t you understand that? What the hell is wrong with you people!?”

Twenty minutes out of the pressure cooker, she was drowning in fears about what it would mean to not get an offer. She may have to move back in with her parents. She’d need to ask her also unemployed boyfriend for financial help. She’d have to develop a taste for spam, ramen noodles, or maybe even cat food.

Worst of all, when she inevitably failed, she’d have to acknowledge it was all her fault for blowing this interview.

About ten minutes in, I realized that comforting her was not an option.

She didn’t believe me when I told her she’d done her best and she shouldn’t be hard on herself. She felt sure there was no other way to look at the situation; the interviewer was sitting in his office stroking his handlebar mustache and laughing maniacally about the inept woman he had no intention of hiring.

She was talking herself in circles, alternating between statements of certainty—that all had been lost—and asking me what I thought might happen, as if perhaps there was still hope if only an outsider would verify it often enough.

But whenever I suggested that it’s never over until it’s over, she plummeted back into prophetic despair, convinced her inadequacy only allowed for one disappointing outcome.

Just then, between tears and speculative conclusions, call waiting beeped in. She got the job.

I could feel her immense relief. From 3,000 miles away, I felt her heart rate slow down, her erratic thinking simmer, and her narrow vision of doom expand into a blend of shock, euphoria, and excited anticipation.

As I thought about how unnecessary all of the worrying had been—and how I wished she didn’t put herself through that—I realized I’d been in her shoes before. There have been many times when I’ve felt overwhelmed by a sense of powerlessness and desperate to feel some type of control.

There have been times when I’ve asked people for their opinions and then felt unsatisfied until I heard exactly what I wanted to hear. When I’ve made assumptions about negative things to come and then obsessed over what I could do to prevent it, or what I should have done to avoid it.

In retrospect, all that mental busy work did very little to change what was coming.

It wasn’t even slightly useful or productive, and it definitely didn’t soften the blow if my fears came true and something went wrong or didn’t pan out.

In fact, it only exacerbated the situation, because worrying essentially began the disappointment retroactively.

Every time we use the present to stress about the future, we’re choosing to sacrifice joy today to mourn joy we might not have tomorrow.

It may seem like we’re creating solutions or somehow protecting ourselves from pain, but in all reality, we’re just causing ourselves more of it.

Perhaps the key is to challenge that instinctive sense of fear we feel when we start thinking about uncertainty. When I look back at the most fulfilling parts of my life, I realize most of them took me completely by surprise.

I may not have gotten everything I wanted, but I’ve wanted what I’ve gotten more than often enough to compensate. The unknown may have provided some heartache, but it’s also provided adventure and excitement.

For every time I’ve felt disappointed, there’s been another moment when I’ve felt a sense of wonder. Those are the moments we live for—when all of a sudden we see the world through new eyes in a way we could never have known to predict.

Uncertainty is the cost of that deeply satisfying, exhilarating, spontaneous sense of awe.

It would be easy to say that mindfulness is the answer to worrying. If you’re truly immersed in the present moment, there wouldn’t be any reason to fixate on what might be coming. But I suspect it’s inevitable we’ll do that from time to time. We’re only human, after all.

Maybe a better suggestion is a combination of being in the moment and trusting in the one to follow.

We can’t always control what it will look like, but we can know that more often than not, it will lead to something good if we’re open to it. When it doesn’t, we’ll get through it—and faster if we haven’t already overwhelmed ourselves with what-ifs and worst-case scenarios.

On the other side of worry, there’s trust. We can’t always trust in specifics, but we can trust in ourselves.