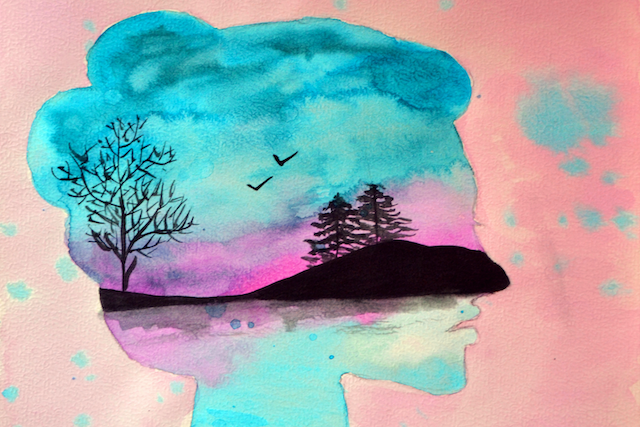 The world is filled with people who work hard at being positive, peaceful, and more spiritual and then feel bad when they don’t measure up. I know because I used to be one of them. And I still am from time to time.

That was before I realized something:

2. Spirituality isn’t something you do; it’s something you are, and you are this right now. Just as beneath the chatter of your mind you are already positive and peaceful too.

3. You are already as spiritual as you’ll ever be.

There, article done: My views on trying to be more spiritual.

Well, okay, there’s more to it than this. Let’s back up—starting with a confession or two.

Confession 1: It’s after midday, I’m still in bed, and all I’ve eaten today is cheese.

(That was more like a warm-up confession; I mean, who doesn’t stay in bed with half a block of cheese from time to time? And in all fairness to myself, it was a small block.)

Confession 2: I try hard, at everything—or at least most things.

(My husband made me add the last bit because he said I don’t always try hard when we play backgammon.)

But seriously, or at least half seriously, if there were a lecture on How to Relax More and Not Try So Hard, I’d be in the front row, my hand in the air, with half a dozen questions. I might even take notes and record the lecture so I could listen at home.

For me, “trying hard” has been a badge.

We believe that if we’re successful, whatever success looks like in our sphere of influence, we’ll he happy and loved.

We’re all ‘’try hards”—we all do it; it’s a universal condition. Your trying will look different to my trying, but it’s all the same.

You might not be focused on getting good grades or running the best little bookstore in New Zealand, like I once was, but you’re trying hard at something: being the model member of a motorcycle club, a good father, or someone who posts the funniest Facebook posts. You’re trying hard.

Question: My propensity for trying hard annoys the crap out of me at times, but still I do it. Arrghhh, but why?!

I try hard because I have a mind, and this is what all minds do.

Your mind is constantly calculating what you should be doing now so that you’ll feel better in the future. Get a college degree and then you will feel happy, your mind tells you. Do more yoga and then you’ll feel more peaceful, your mind says.

One of the things that can happen on the road to self-awareness is that we begin to understand, intellectually anyway, that inner peace isn’t found in material possessions, and so we divert our attention to trying to be more spiritual.

I know I did. I read books about spirituality. I signed up to newsletters.

My mind started to tell me, inner peace isn’t getting a new car, silly; it’s in being more present, in meditating, being more environmentally friendly—these are the things you should be focusing on!

And it’s true; happiness and contentment are only found in the present, and meditation and mindfulness are great ways to do this. So is actively “doing nothing,” but I digress. My point is this:

You can make spirituality as materialistic a goal as a groovy new yoga mat.

That little voice in your head that used to say you weren’t good enough because of the crappy old car you drove will turn it’s attention to what a failure you are because you catch yourself being judgmental, or because you haven’t meditated today.

“How hard can it be!?” our mind screams at us. “You just read a book about feeling grateful, and here you are two weeks later being ungrateful.”

“When will you ever learn?” your mind says. “Look at how calm Marianne Williamson is, and you’re not even half as calm!”

A few years ago, I spent a year being silent. Every day I turned my attention to “doing nothing”—and by that I mean I removed all distractions, like television, reading, and so on, and just sat. I let my mind wander and noticed it from time to time.

My friend had told me that “in silence and doing nothing the bits of you that needed fixing, fix themselves.”

I wanted to fix my propensity to overwork because it was causing me problems. So there I was, “doing nothing.” And guess what?

I tried so hard at “doing nothing” that I became phobic and more anxious than I’d ever felt before! I was trying hard at not trying hard. When I realized this, I had to laugh.

It wasn’t until a few months later that I realized I was as critical of my attempts at spirituality as I had been in the other areas of my life I was trying to change.

“You know, don’t you, that you’re a negative person?” a friend said to me one day.

I thought about it for a while, and it occurred to me that he was right—I did expect a bad outcome a fair amount of the time. I didn’t truly believe in myself.

“Nothing,” he said. “It doesn’t matter whether you’re a negative or a positive person, and you probably won’t always be a negative person; you just are right now.”

“What? You mean I don’t have to try to be more positive??”

Now I was starting to get it. I didn’t have to change who I was; I could just notice and accept how things were. And, as I discovered, this is the quickest way to move on anyway!

Are you making spirituality a materialistic goal? Are you critical of yourself for not being as “spiritual” as you want to be? Or as peaceful? Or as positive? Or as mindful?

One of the things I took away from my year of silence was an understanding of my mind. The truth is that anytime we think we’re not good enough, this isn’t reality; it’s just our mind talking. You don’t have to believe what your mind tells you.

We are good enough, right now. And this isn’t even a feel good pep talk; it’s the truth. A spiritual truth.

It’s 3pm and I’m still in bed. I still have my sometimes-negative tendencies. I still have a whole host of other habits that books and spiritual teachers tell me I shouldn’t have, and then there’s the situation with all these cheese crumbs.

But now I know—it’s perfect.

(It’s even perfect when I forget how perfect it all is and start judging myself!)

So what does spirituality look like if it’s not getting a new car or mastering the downward facing dog?