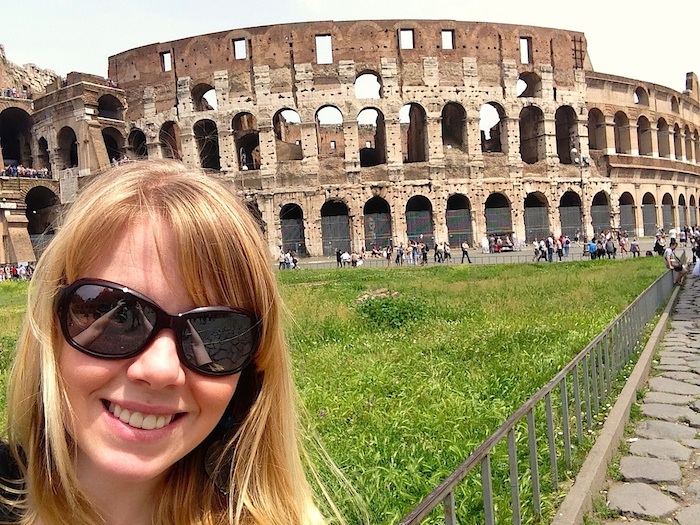 “Don’t be pushed by your problems; be led by your dreams.” ~Unknown

A little over forty-eight hours from now, I’ll be on a plane to Europe where I plan to spend three months traveling (and working) with my boyfriend.

Saturday is the first day of a dream I’ve held for well over a decade.

It was my second year in college when I did my semester abroad, staying in a castle my school owns in The Netherlands.

I was one of less than seventy students there, part of an intimate group that traveled together on three weekend trips to Paris, Amsterdam, and Koln.

Aside from those group excursions, we all had three-day weekends and two full weeks off to travel.

I visited Italy and Spain during my weeks off, but spent most weekends on site, largely due to financial constraints. Still, a weekend doing nothing at a castle in Europe is, in itself, an adventure.

After returning home, I spent the next year working 40+ hour weeks as a hostess at an upscale Boston restaurant (while also studying full-time) to pay off my charged travel expenses.

My schedule was tight and my job, not all that exciting, but the experience felt worth every uncomfortable moment in that itchy polyester blazer.

I had started seeing the world. I had gotten a chance to experience dorm life—something I didn’t know much about, being a commuter—and I did it in a castle with a moat, a tower, and historical significance.

It wasn’t the most emotionally stable time in my life, so I brought a healthy dose of drama overseas, but now, fourteen years later, what I remember most are the excitement of possibility and the pride I felt in working to provide that for myself.

And it’s those same two things that most energize me now. I’ve dreamed of this. I’ve planned for it. I’ve worked for it. And now it’s happening.

If you have a dream, something that excites you, inspires you, and maybe even keeps you up at night, I have some advice for you:

So often we think of dreams as things most people don’t get to do—luxuries reserved for people who are privileged, wealthy, or well connected.

It’s true that some people have more advantages than others. What takes one person five years of planning and saving may require another to do little more than sell a stock and make a call.

It’s also true that the second person may have worked incredibly hard for said stock. The point is: We’re all starting from different places, for different reasons, with different levels of work required to get from A to B.

If your dream is something you’re physically incapable of doing, it may be improbable (but not impossible—we’ve come a long way with technology!) And there’s no denying that certain dreams are more difficult to achieve than others.

But most of the things we dream about are things we could do if we were willing to work toward it, align our choices to support it, and stay flexible in terms of fulfilling it.

2. Take tiny steps to work toward it.

Working toward it entails aligning with the right people, disregarding discouragement from people who don’t support your growth, and taking tiny steps each day to move toward your vision.

“The right people” are those who help you, support you, encourage you, believe in you, and guide you on your way to this dream. It may include people who’ve done what you want to do, people who also want to do it, and even people who just plain find it cool.

Share your enthusiasm and progress with them. They’ll keep you excited and help you stick to your plan.

As for those people who don’t support your growth, there will be many of them, and they most likely won’t be malicious. They’ll be well-meaning people who aren’t able to do step one for themselves, and, therefore, think they’re doing you a favor by discouraging you. Politely decline that favor.

Their words may seem to keep you down, but it’s how you internalize them that holds you back.

And as for taking consistent steps, they really can be tiny. It may not seem like much to make a call, bookmark a site, or send an email, but the little things add up over time—and because they’re easily doable, each one may inspire you to do more.

3. Make choices that support it.

Much of our experience stems from our choices. Not all of it; there are some things that we can’t control.

This isn’t a suggestion that if we make all the “right” choices, everything will line up and magically work out. It’s just that we have more power than we often realize—and our power lies in our choices.

Whatever your dream, the first choice is to prioritize it. As you’re able, dedicate time to it, money to it, attention to it, love to it. Give what you can, as you can, and back that giving with belief, passion, and enthusiasm.

The other side of this coin is realizing which choices don’t support your dream—when you’re doing too much or pursuing other dreams that conflict, for example.

For me, that’s meant pushing off some other equally exciting milestones with my boyfriend, like buying a house.

4. Stay flexible about how you’ll fulfill it.

This isn’t meant to discourage you from reaching for the stars. It’s just a reminder that there are a lot more of them than you may realize, some far closer than others.

Being a singer may include a jazz club, not a fan-packed stadium. Writing a book may entail self-publishing, not a six-figure advance. And traveling may include teaching abroad or a string of budget bed-and-breakfasts—I know because this time around, I’ve booked several!

They may not be the ultimate dream, but they are, in fact, reflections of it.

And in that moment when you’re doing something inspired, passionate, and in line with your deepest intentions, you’ll feel two things that you may not have realized weren’t exclusive to one specific vision:

And now, two final thoughts on making dreams come true: know that no dream is better than any other, and stay open to the possibility that your dream may change.

Regarding the first part, your dream may not seem big or romantic. It doesn’t need to be. It’s an extension of your unique values and priorities, and all that matters is that it matters to you.

As for the second part, sometimes we attach to dreams simply because we’ve held them for so long. It’s the sunk-cost principle: After you’ve invested a lot of time, energy, or money, it’s hard to consider walking away.

But if your priorities have changed, you may no longer want it. Accepting this isn’t a sign of weakness or defeat. It’s growth, and the wisdom to enable it.

Of course, there’s also the possibility that your dream may have changed in a smaller way.

This weekend when I leave for Rome, my parents, my siblings, and my boyfriend’s parents will also be en route for a short family trip.

My dream wasn’t just to go back. It was to go with the people I love. And after much conceptualizing, convincing, and coordinating, it’s now coming true.

What’s your dream, do you believe you can fulfill it, and what tiny step can you take today to start (or continue) working toward it?