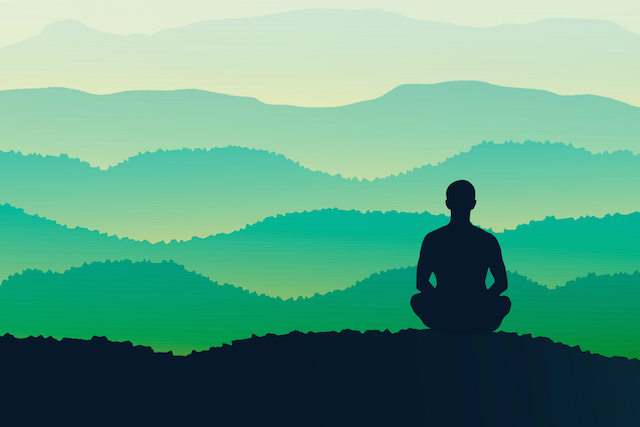 “Neurologists claim that every time you resist acting on your anger, you’re actually rewiring your brain to be calmer and more loving.” ~Unknown

One of the most impactful ways that mindfulness has changed my life is how I’m able to work with my feelings of anger.

Anyone who has met me in recent years would never know how anger used to run my life. I often wish that people who are just now meeting me could realize the transformation I’ve gone through from my past. If people could see how mindfulness has changed me from an angry, irritable person who hated the world to a fun-loving, happy-go-lucky guy, I think everyone would give mindfulness a try.

My mindfulness practice has allowed me to pay attention to what’s happening in my mind and body when anger is rising. I often call this the “volume knob” of anger, and I’ll dive a little more into that shortly.

First, I want to give you a glimpse into my past so you can have a better frame of reference of where I used to be and where I’m at now through a practice of mindfulness.

The Child of an Alcoholic

I grew up as a child of an alcoholic mother, and this gave me a host of issues while growing up, but the biggest one was anger.

I was extremely angry with my mom because I couldn’t understand why she wouldn’t stop drinking for me. I thought that if she truly loved me, she’d be able to quit drinking for me, but she didn’t. My mom ended up getting sober when I was twenty years old, but it was twenty years too late, and I still had two decades of resentments toward her.

Aside from the anger I had toward my mother, I had anger toward the rest of the world.

Looking back on it, it seems completely insane (and it kind of was). It angered me growing up with kids who didn’t have to go through what I was going through in my home life. The kids I grew up with had great parents who made a decent amount of money and could buy them whatever they wanted. But it wasn’t just the material things; they actually had parents and family members who cared about them.

A Life Full of Anger

Being angry all the time was exhausting, but it was the only way I knew how to be. Because of this, I took my anger out on anyone who crossed paths with me.

Although I wasn’t someone who got into many physical altercations growing up, I had words that were venom. I hurt many people throughout my life by saying the most hurtful things I could think of, and then I felt extremely guilty about it. While I thought that every woman I dated was at fault, I could look back at my past and see how toxic I was to anyone who had the misfortune of dating me.

I forgot to mention that I turned into a drug addict and alcoholic myself around eighteen years old, but I managed to get sober on my twenty-seventh birthday in 2012.

Part of the program of recovery that I work says that one of the main reasons we drink and use is because of resentments, which I could definitely relate to. Another part of this program is making amends. Making amends to the people I had hurt in my past was something that helped me forgive myself, but I’m also not a big fan of making amends.

One of the issues with getting sober is that you don’t immediately become this spiritual being. I still had a lot of anger, and I still couldn’t control my temper. I was the epitome of someone who reacted rather than responded. Whenever I would react poorly, I had to humble myself to apologize. I needed to figure out a way to manage my anger before it got to that point, and that’s when I found mindfulness.

Mindfulness is My Anger Management Tool

I didn’t find mindfulness until I was three years sober. My anger wasn’t nearly as bad as it used to be, but it was still there. I knew that I still had a lot of self-improvement to do, so I gave mindfulness meditation a try.

From the first time I tried meditating, I immediately understood how transformative it could be in my life, but I didn’t realize how much it would help me with my anger issues.

One of the reasons I love the practice of mindfulness is because there are so many informal practices. As I started introducing different practices like mindful walking, mindful listening, and mindful communicating, I was becoming more mindful in my everyday life.

What I began to realize was that I was only acknowledging my anger when I was ready to explode, and it was often something that had been building up for a while. Since I wasn’t recognizing the early triggers of my anger, I wasn’t able to deal with it before reacting in a way that I would regret.

Some of the patterns of my anger triggers I started to recognize include:

When I speak of the “volume knob” of anger, I mean that mindfulness has helped me begin catching my anger at a volume level of one or two rather than at a nine or ten. By the time my anger gets to the highest volume, it is controlling me rather than me controlling it.

Being more mindful throughout my day has given me the opportunity to not only spot my anger in its earlier stages, but it’s also allowed me to treat it with compassion and curiosity.

Now, when I feel that initial anger within my body or mind, I get really curious. I take a calm breath and simply think, “That’s interesting. Why am I feeling this way towards this person or situation?”

Mindfulness helps declutter the mind and help me get to the root of what’s really happening within my own mind. Often times, I find that my anger is based on circumstances that are completely outside of my control, or they’re based on other circumstances that have nothing to do with the other person or people involved.

Perhaps the most profound way that mindfulness has affected me is that it’s had me realize that my anger is often based on belief systems that are rather closed-minded.

A great practice you can begin using is mindful communication. This involves being fully present during a conversation, which involves listening while also being mindful of what your own mind and body are doing.

I suggest you begin practicing this with someone who you may not get along with too well, but not someone who makes you overly emotional. This could be a coworker you’re not too fond of, a family member, or a friend in your inner circle. If this is too much for you, you can do it while browsing social media posts or watching the news.

While communicating with this person, be mindful of the emotions rising in your body and the sensations you’re getting. Begin to notice what they’ve said that’s triggered this initial emotion and be aware of where you’re feeling sensations in your body.

Rather than turning to judgment, just be curious. Be fascinated by why your body and mind are reacting the way they are in that moment. When you treat these thoughts and sensations with equanimity, you’re less likely to react poorly in the situation.

When I speak of being fascinated, I mean to treat your experience with the curiosity of a child. This was one of my first lessons in mindfulness. When you’re being curious, you’re not judging. Inspect your experience like a child closely examining a leaf for the first time. This helps takes the power away from the strong emotion you’re feeling in that moment.

This whole practice is extremely important because it gives us a chance to pause. When we pause, we’re able to respond rather than react. Reactions are often what the primitive part of our brain wants to do, and we don’t put much thought into it. This typically leads to regret and suffering. By being able to pause, and then respond, we make much wiser decisions.

This is going to take practice until you have your temper under control, but over time, you’ll begin to reflect on situations that would have set you off. I’m personally amazed at how well my anger is managed today, and it’s something I continue to work on. Now that I know how to respond rather than react, I don’t find myself regretting the decisions I made out of a knee-jerk reaction to anger.

As I mentioned in the beginning of this post, I wish more people could truly understand how much mindfulness has changed me. Whenever I see senseless acts of violence such as domestic abuse, physical altercations between strangers, or even murder that happens due to somebody’s inability to manage their anger, I just think of how much different this world would be if more people learned this practice.

My hope is to be an example to others when it comes to managing anger through mindfulness. If they can see how I respond to life’s difficulties on a daily basis, maybe they’ll decide to give this mindfulness thing a try.

Chris Boutté struggled with depression, anxiety and addiction for most of his life. After getting sober in 2012, he was on a mission to improve his mental health as well as his sobriety when he found mindfulness. Subscribe to Chris on YouTube at The Rewired Soul and follow him on Instagram @TheRewiredSoul. If you’d like to learn more about Chris’ story, check out his book HOPE: How I Overcame Depression, Anxiety and Addiction.

Giveaway and Interview: The Mindful Manifesto